In Calgary, they call it the 'C of red', a playoff tradition that dates back 20 years where all Flames fans are asked to wear red for playoff games: 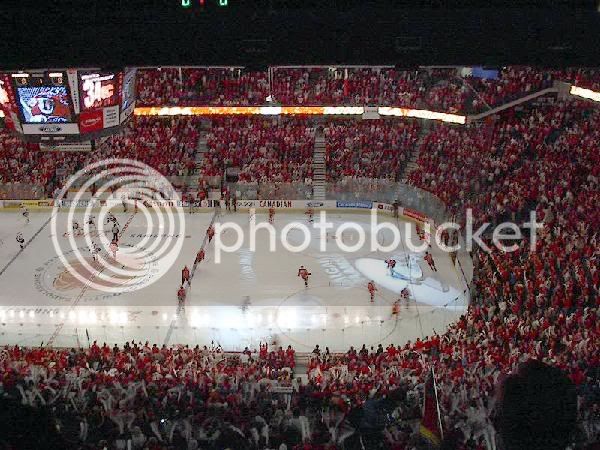 In response, the Flames first round opponent in 1985, the Winnipeg Jets, began the Whiteout, a tradition that has followed the franchise to Phoenix.

But where there are fashion trendsetters, there are always copycats trying to live off the coattails of others success. In response to Calgary's C of red, the San Jose Sharks asked its fans to create an "Ocean of Teal." Predictably, it failed miserably. I'm sure Sharks management is baffled, but really, why would anyone voluntaraly own or wear a teal coloured t-shirt? Ooooh, intimidating!

Undaunted, the Philadelphia Flyers have chosen to hop on the fashion bandwagon, encouraging its fans to wear orange. While orange may be a more manly colour than teal, one has to wonder if the Flyers will be able to succeed where the Sharks failed.

It leads me to wonder if Tampa Bay will copy the idea as well. What colour would they wear? A "Black out" to follow home colours? I mean, Lightning does show up most clearly in the dark... Hopefully for Lightning fans, they won't re-visit Vancouver's crying towel tradition.

This proves a sad point in the NHL as well -- traditions are so rarely born and so often copied... Be it songs played in arenas, things thrown on ice (Rats? To copy octopi? Get real!), or chants by fans. Doesn't anyone have an original idea to build a tradition? Vancouver having the crowd sing a verse of O Canada during every game is a rare original tradition, and of course the Stars prolonged Goal horn, along with the crowd making sure to pronoucne STARS during the Star Spangled banner, are both original traditions...

Something rare, something unique... Something that foregos the clich?nd actually makes a dent in the fabric of the NHL's history....