Taking a break from my attacks on Lightning management, I'll redirect my efforts now toward the city of St. Petersburg, Florida.

Previously known as "God's Waiting Room" (just had to dust that one off), St. Petersburg has turned into a happening place over the last decade. Nightlife thrives, there's a happening residential community both downtown and elsewhere in the city... Things aren't all rosie there, however with economic disparity and racial/social issues, but it's a far cry from the void that it was for so long.

Oh, lest I forget, there's a little baseball team down there that's got a bit of a following now. Which brings me to the point of this post.

You see, the Tampa Bay Rays announced their desires to have a new baseball stadium (just as the economic climate was turning sour in December 2007) built on the site of Al Lang Field. While the design and funding concept was outside the box, there were too many issues (economics, logistics, NIMBY's, etc) that put a halt to the plans for Tropicana Field's replacement.

But the team is still exploring options and places around Pinellas County...

Which has St. Petersburg crying foul because the team's lease at Tropicana Field and with the city of St. Petersburg does not expire until 2027, and they don't want the Rays to go anyplace outside the city. Oh, and they're not sure if they even want a new stadium for the Rays...

But they demand the Rays be their own personal Rays. Forget the region concept that is the name "Tampa Bay" -- the thought debate on a new stadium has hinged (supposedly) in the past on the Rays ballclub being renamed the St. Petersburg Rays.

An internal study the Rays had conducted in 2007 (before they came public with plans for a waterfront ballpark in downtown St. Petersburg) showed that St. Pete was actually the worst place the team could be, due to logistical reasons. Downtown St. Petersburg (where the current team home, Tropicana Field, and the since-retracted new stadium proposal are located) is at the southern tip of the Pinellas County peninsula. While an interstate connection is on site, the majority of the local population (as well as ex-burb residents outside the immediate area) don't have an easy journey to St. Pete. 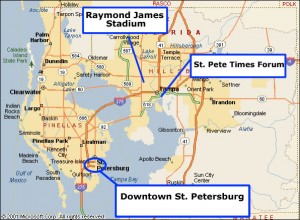 Locations of the three major sport venues in the Tampa Bay area.

An NFL stadium that houses a game one day a week for 8 weeks a season (not including pre-season and potential playoff games). Their fans flock in from far and wide and transit to the game needs to meet long-haul commuters and short haul commuters alike. That's not a problem. NHL and NBA teams have to draw 41 times a year at home while their venues are usually inside an immediate urban area. Drawing 20,000 a night is simply dependent on the quality of the product in most cases. The immediate exception that comes to mind is the New Jersey Nets NBA team (and previously the New Jersey Devils) who play home games at the Meadowlands sports complex and fail to draw - well outside of New York City or Newark, New Jersey.

A venue for a Major League Baseball team, in contrast, needs to be located in an area where it can draw from a large swath of the regional population for 81 home dates. This is not a problem for major metro areas (note that, areas) due to large populations... Smaller markets need to draw from a wider area than their immediate city limits.

By being provincially mindful about the Major League Baseball team awarded to the Tampa Bay market in 1995, St. Petersburg demands that it's 249,000+ residents are the ones to draw from over the marathon that is a MLB season. Forget Tampa, forget points north and east beyond the tip of the county.

Yeah, St. Petersburg could lose money without the Rays playing inside the city limits due to a drop in tax receipts from local businesses aided by the draw of the Rays. But then again, the entire area can lose out with continued small-minded, inferiority-complex driven egomania from St. Petersburg.

This isn't a St. Pete-versus-Tampa argument that seems to drive the St.Pete-or-nowhere decree from city officials. Fans should be pretty much aware all studied stadium locations that have been explored are in Pinellas County alone. Still, the city of St. Pete warning about stadium location seems as small minded as ever for a region that is held back by local provincialism over and over again.