The Anatomy of the Amazing - Stamkos goal in Anaheim

Share All sharing options for: The Anatomy of the Amazing - Stamkos goal in Anaheim

We've already posted platitudes about Steven Stamkos goal from Thursday night in Anaheim.  It felt, however, like we could do it better justice by putting it under the microscope and looking at what happened in context.

Instead of re-posting the goal in it's entirety here, we'll be posting stills (from TSN's clip that posted on YouTube almost immediately after it happened) and trying to highlight the goal in four movements:  The set up, the shot, the rebound, and the score.

The images are not the largest pictures you ever see, nor are they the highest quality.  In some of these images, you will see blue circles.  That's an attempt to highlight the puck and what it's doing.  Watching the replay, it's happening so fast that it's easy to lose it.  All this being said, lets begin breaking this down after the jump.

First thing's first...  The Set Up

Almost every goal is set up by someone, and often those set-ups the very reason why the goal takes place - the how and the why of the pass enables.  It's no different here.

Ryan Malone fishes the puck out of the corner, moving it along the boards to Vincent Lecavalier, who is behind the net. At about the same time, Steven Stamkos races in from the high slot heading for the crease: 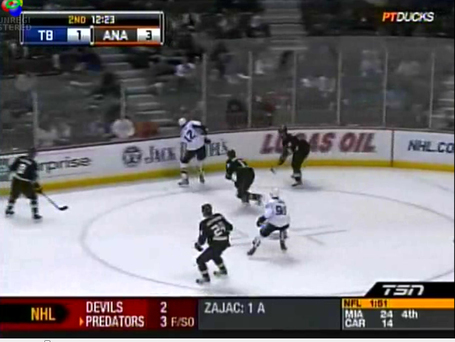 While Lecavalier is behind the net, the nearest Ducks defenseman, Scott Niedermayer, is in the crease.  Jonas Hillar isn't exactly distracted by his own D-man, so he's aware of where the puck is.  Stamkos continues to make his move here, off screen. 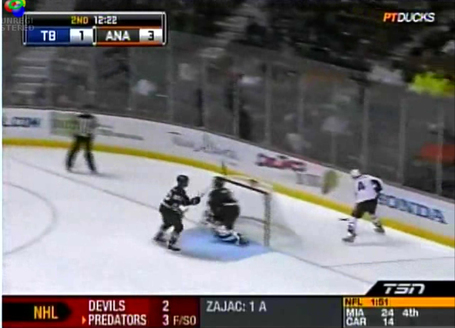 It's a beauty of a good pass - right by the defender.  Stamkos is coming in, and Hiller has left the top left corner of the net open.  Wide open.  A laser shot gets that by him, glove side, and makes this a 3-2 game.  At least, that was the target of the moment. 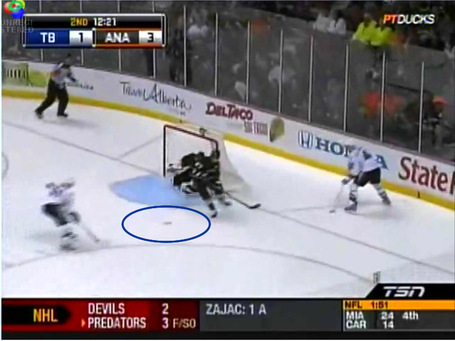 The hardest aspects to show from these video stills are the first movements of Stamkos attempt on net.  It's a blur no matter where you look at the video - whether on YouTube or from the NHL.tv version of the video.

Stamkos is shooting as he receives the puck - a one-timer.  The corner is still open but his aim is off, so he ends up shooting at Hiller - at either his chest or his shoulder. 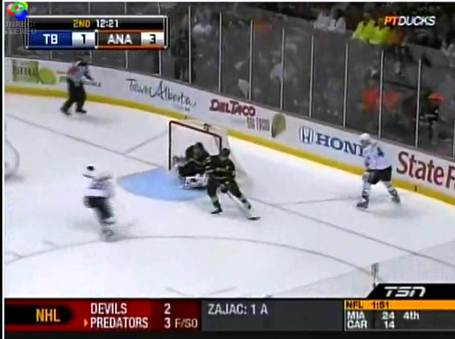 It's a save by Hiller, but the puck is still loose.  Stamkos is on his one knee from the force of taking the shot and is still sliding on the ice due to momentum toward Niedermayer. 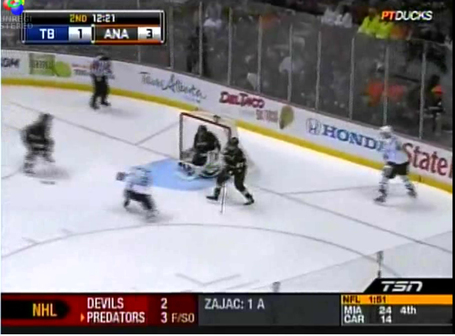 As he's wiping out from his shot, Stamkos is still fixated on the puck; he's eyeing it from his sprawling position (first the one-knee position, then from a semi-split, and finally sitting) on the ice.  He's still sliding forward.  The puck rolls off of Jonas Hiller's chest and is flipping toward the front of the crease. 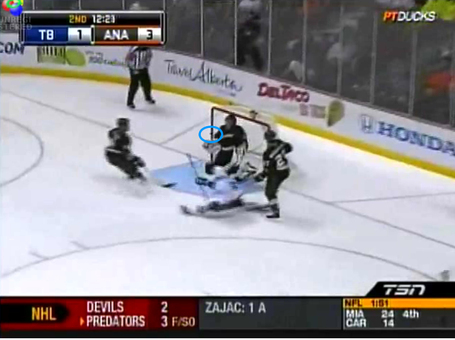 As the out-of-control puck rolls off Hiller's chest, Stamkos's stick is still in a good position from the strong follow-through from his initial shot. 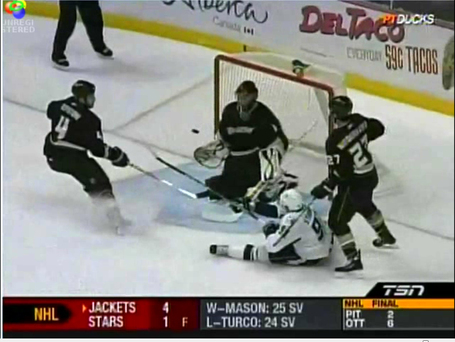 The shot heard round the rink

This is where luck, chance, and drive comes into play.  Stamkos is now in a sitting psotiion, the puck has bounced off Hiller, and Hiller's stick is essentially in position to stop the puck

It's not much - but Stamkos taps in the puck. By chance?  Out of luck?  Skill? A little bit of everything?  As it happens, the puck that was flipping as it came off Hiller is now redirected back toward the net. 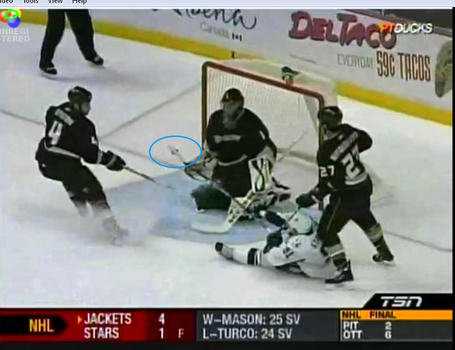 And that simple redirection beats Hiller where he was most vulnerable and most open:  High on the glove side. 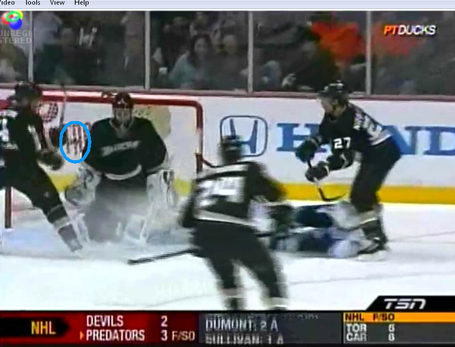 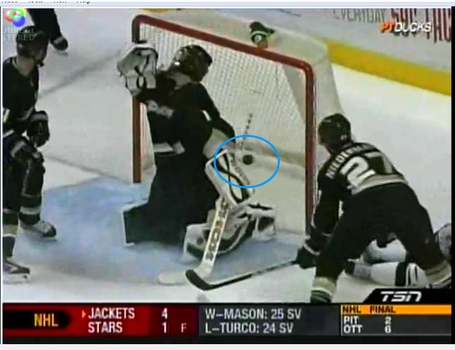 And really, all that's left to do is celebrate this one.  It was a solidly implemented play to begin with, even without the final astounding theatrics. A fluke goal on a broken play that gets the Lightning back in the game.

All of this played out in a span of 2 or 3 seconds.  Looking at the video, it feels like an eternity and yet it's just an instant.  And a miraculous instant at that.  One for the books, or at least for Lightning folklore.  It's a shame it wasn't on TV in Tampa, or more people would have had a chance to appreciate it.