Another childhood dream shatters a little

Share All sharing options for: Another childhood dream shatters a little

(Editors Note: This post was written by Clark Brooks, who unable to post up the story himself. It's cross-posted from his personal weblog, Ridiculously Inconsistent Trickle of Consciousness with Clark's permission.-- JPF)

Last year, I got a chance to meet Mike McKenna when he was a goalie with the Tampa Bay Lightning. He was called up from the minors due to an injury and it was kind of a surprise to everybody, including him. As a result, he sort of carried an affable "gee whiz, pinch me I'm dreaming" kind of vibe that was endearing, especially compared to many of the professional athletes whose over the top "ME ME ME" personas tend to dominate the sports pages. Between that and the fact that despite having worked for an NHL team and having met lots of players I don't actually "know" any, I decided he would be my favorite player. Having favorite players makes sports fun. So now I root for him, even though he's no longer with the Lightning.

Recently, I was at a hobby store and came across his rookie hockey card (pictured) so I snatched it up. I was so excited that I shared my find with the world via Twitter, "I just got a Mike McKenna rookie card!" A little while later, Mike replied, "Lucky you...I don't even get cards of myself! I guess I'll have to buy them off eBay or something...".

I was stunned. I couldn't believe it. I never made it as a professional athlete (obviously...shut up) but like most American males, I fantasized so much about it that I thought I had a pretty accurate idea what it would be like, and it broke down something like this: 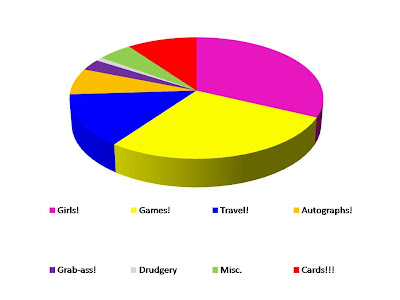 As you can see the card thing is a huge part of the equation! If that's not accurate, it means some of my other numbers are wrong as well and the whole thing is out of whack.

It's definitely a bummer", Mike said. "You'd think the card companies would send a handful to each player. Still cool though!"

If you say so, Mike. Still, I can't help feeling disappointed...which is nothing new for me; I grew up a Pete Rose fan.

(Mike McKenna is currently with the New Jersey Devils organization and is playing for the Lowell Devils of the American Hockey League. You can follow him on Twitter at http://twitter.com/MikeMcKenna56)