How do you restore faith in the franchise?

Share All sharing options for: How do you restore faith in the franchise?

It is as simple as this. Fans trust Vinny Lecavalier a great deal, and they don’t trust the new ownership at all.

Around here, Lecavalier is not only the face of a franchise, he is the faith. In the chaos of a season, he is the reason to keep watching.

He is the reason to think things might eventually get good again. 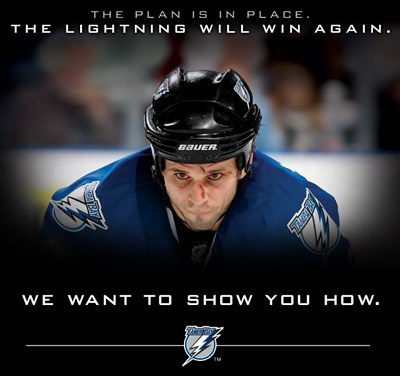 Fired, traded, tossed, didn't pass muster, etc, etc, etc...  These are just the subtractions and doesn't include the additions of the rampant change at 401 Channelside Drive.  With each transaction, there is an accompanying story to which we could delve into.  A chapter in the grand novel that was the Lightning's 2008-09 season.

But there's a subtext that can't be seen in any of these stories - of acquisitions, of failures, of knee-jerk reactions and what not.  That story is a story of faith.  A faith that existed with the five year build of former ownership that produced a championship and a competitive team.  It earned respect and loyalty from the fan base (even if the grumbles and cat-calls were mounting at the end of the Palace Sports reign).

I've actually been wrestling with that for the last half hour...  And for most of the day for that matter.  I've been trying to figure out just what would bring back trust in management, faith that the team is moving forward toward long-term competitiveness and respectability again.

If you go back to the listed transactions at the start of this article, the stories of each subtraction tend to be riddled with reasons why the faith has disappeared:  The moves, and fallout from those moves, have tended to be along the lines of cold.  It went further than the fact that sports are a business and do what's best for the business.  They've dallied into the impulsive while meandering through the bizarre.

The impulsive does not inspire trust -- it inspires caution.

The bizarre only inspires faith that the next action may very well one-up the last in it's strangeness.

The only stability and consistency for the fans to revel in at this juncture are the long-time standard bearers of the team.  As Gary Shelton's quote from January suggests, the fans have more faith and trust in the abilities of Vincent Lecavalier than management.  This is also true for Martin St. Louis, as that advertisement suggests.  We've grown to know, respect, and admire these players.  We have seen the proof of their greatness and we find comfort in their abilities.

In contrast, we're being told "The Plan is in Place" by a group who has shown no consistency.  Actions speak louder than words, and those actions of this past season have not inspired trust...

The transactions, personnel moves both publicly and privately, the plan and blueprint are lacking one key cog - one key principle - that has to drive fans year in and year out.  It's a universal truth in sports and must be at the forefront once again for the Lightning, as it was in the not-so-distant past, before the Cup...

How do you restore faith in the franchise?  With hope.

By the end of the 2000-2001 season, the Lightning had done just that under general manager Rick Dudley.  It's long term future was promising with the likes of Brad Richards, Fredrik Modin, Pavel Kubina, St. Louis and Lecavalier on the team.  The addition of Nikolai Khabibulin late in the season would further the idea the Bolts were ready to compete...  Hell, how many Lightning fans can recall Khabibulin's introduction to Tampa Bay?  That public press-conference erupted in cheers and chants of "Nikolai!"

Of course, there would be more additions and subtractions from that team before everything was said and done, including Dudley's departure from the Bolts and the hiring of Feaster and Tortorella...  But the fact is that hope arrived in 2000-01 even if the team that season still was atrocious.  And it wasn't through the promise of greatness from one single player,  but of a core of talented players that were untouchable.

The plan that OK Hockey needs to sell the fans on is why to be hopeful.  And you can't tell the fan to do so -- you need to show it on ice and through the actions of the franchise itself.  Big name, big ticket transactions may earn headlines, but it doesn't secure the competitiveness of the team.  That, if nothing else, should have been learned this past season.

An open rapport with the fans is great, but you don't need the glitz and glamor of Hollywood in these sessions.  What you need is only to be savvy people and businessmen, listening to your customers and understanding their concerns.  Not necessarily letting the mob control the direction of the team, but at least acknowledge just what the biggest concerns are.

Most importantly, hope might sooner be had for the fanbase with experience from those in charge.  It's an asset to have an experienced and versed executive to help out those new to the business of running a pro sports franchise and arena.   You need only look to St. Petersburg and the model Stuart Sternberg put into place with the Tampa Bay Rays franchise: rounding out inexperienced but eager staff with career baseball executive Gerry Hunsicker.

Hiring someone like that, someone experienced and with renown to share in oversight responsibilities would go a long way to restoring confidence in this franchise.

Confidence, after all, does inspire faith...

And who knows, if the Bolts hold fast in what is being marked as one of the deepest drafts in years, use their selections wisely...  Well, hope for a better tomorrow and the overall future of the franchise is not that far out of reach.