The Unlikely Scenario - Tavares falls in the draft

Share All sharing options for: The Unlikely Scenario - Tavares falls in the draft

Yesterday evening I highlighted a quote from Islander Point Blank, pointing out that Defenseman Victor Hedman would be in Tampa on Tuesday...  It'll likely be a meet-and-great and interview session as Brian Lawton and the rest of the powers-that-be at Times Palace get to know the man that will likely be their #1 draft pick and the second overall selection of the 2009 NHL Entry Draft  come June 26th.

From that snippet, you couldn't see the rest of the Point Blank article, with it's Draft Combine talk and it's glimpse at the thoroughness of player assessment by the New York Islanders. In fact, there is even more from Point Blank today regarding Victor Hedman in Uniondale to meet with team officials for the Isles today.  He'll be here in Tampa tomorrow for a sizing up from OK Hockey.

The thing is, from Point Break's glowing reviews of Hedman, I can't shake the possibility of Hedman going #1 in the draft.  Oh, don't get me wrong -- Chris Botta undeniably in favor of center John Tavares as the #1 selection.   Also, it's been chronicled time and again about how positive this would be for the Isles - to have a face-of-the-franchise to help build enthusiasm for the team.

But what if, just what if, Victor Hedman goes #1 in the draft? 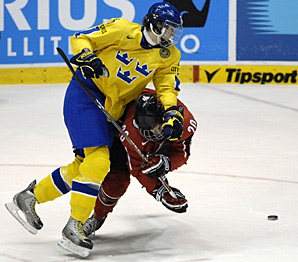 While I can put up a fictional account of what happens on Long Island if Tavares, such a consensus #1 choice for such a long time, is not chosen first overall (I'm thinking something along the lines of an armed revolt by the fan base, but unclear as to what specific anarchy ensues), that's not supposed to be the point of this story.  The point is the what-if regarding Tavares slipping to #2 and the implications of such a scenario for the Lightning.

There's been a considerable amount of nit-picking doubt steered Tavares way over the last few weeks, and that mostly comes from being under the microscope as much as John has been for the length of time that he has been:

Tavares first started grabbing headlines in the summer of 2005 when he was the first player ever to be granted "exceptional player" status by the OHL, which allowed him to be drafted at the age of 14; months before his 15th birthday. Already being dubbed by TSN experts as the next ‘Next One’ behind wunderkind Sidney Crosby, this exceptional player has amassed quite a resume thus far. In three seasons, playing for the Oshawa Generals of the OHL, he has collected 157 goals and 329 points in only 191 games, and he started when he was 15! Perhaps one of his greatest and most notable achievements to add to his list of accolades is his record breaking 72 goal sophomore season as a 16 year-old which surpassed Wayne Gretzky in that department.

For someone with so much offensive skill, of course there will be nit-picks...  But those nit-picks have dropped John's status on some draft boards to #2 or even #3 behind Hedman and center Matt Duchene (who was quite impressionable in the junior league playoffs this year).

If Tavares was to somehow not be selected #1, there would be an undeniable domino effect that would play out.  Yet different choices lead to different scenario's effecting the long term as well as short-term of the Tampa Bay Lightning.  As unlikely as it is, the follwoing are scenario's if Tavares was to fall into the Bolts lap:

Shockingly, Victor Hedman goes #1 and the Brian Lawton and company go to the podium and announce the selection of John Tavares as the Lightning's #1 draft pick.

The possibility of keeping Lecavalier and putting John on wing instead of at Center is scary to think about...  But it's much more likely that the Lightning (instead of keeping a trifecta of Lecavalier, Stamkos and Tavares) would see this as reason enough to attempt to unload Lecavalier and his large contract.  What type of return Lecavalier would bring is debatable but chances are that the Lightning would look to solidify their blue line and possibly add a talented wing in exchange for Vinny's services.

It's unlikely Tavares would match Lecavalier's production (and Steven Stamkos may see the sophomore slump this season), and that could make next season tough to watch, the long term competitiveness for the Lightning would look much brighter than it stands right now.  There would also be more financial room to work with (how much is dependant on who is brought back in the Lecavalier deal).

So your name is Brian Burke, you are the General Manager of the Toronto Maple Leafs, and you've been jonesing for Ontario son John Tavares through the long and bitter post-season.  The offer that you called "absurd" was defensemen Luke Schenn, Tomas Kaberle and the #7 selection for the second overall pick (or something close like that).

Of course, this can play out for several minutes not just as the Bolts are on the clock but between their selection of Tavares and the Toronto Maple Leafs pick at #7 of the draft order...  But ultimately a deal between the Leafs and the Bolts gives the Lightning the opportunity to shore up the blue line and still get a top notch selection in a rather deep draft.  The Lightning might not get Schenn and Kaberle in such a deal, but this scenario certainly focuses more on listening to offers and being willing to part with a franchise prospect.

And while Burke has been the most vocal about wanting Tavares, that doesn't mean he alone would be running over to the Lightning table at the draft to make an offer for the pick or the player after the selection is made.

Scenario Three: Select Someone Else

You got Burke and other GM's banging at your door, you've got the media salivating at the intrigue of problems with Tavares in Tampa, starting wild speculation and rumors of a Lindros-like holdout.  You're in what has been describe many times as a very deep draft class...

Nothing says the Lightning can't just take what they need, and that they must take Tavares or trade the pick.  It's highly unlikely , though, that the Bolts would keep the pick if they did not intend on taking Tavares and would select someone else at #2.

But for the sake of the scenario, if Lawton and OK Hockey can't get what they want in a deal for the #2 pick, or decide to pass on swinging a deal with Lecavalier, do they simply select the next-best-thing to Hedman for their defense?  And even then, who is that?  Jared Cowen is comparable to Hedman in size (6'5", 215 Lbs) but Cowen suffered a serious knee injury during the 2009 campaign and one has to wonder if this has compromised his future in any way?  There's John Moore of the USHL  and Oliver Ekman-Larsson of the Swedish Elite League...  But in both cases, it would seem like reaching to draft either at #2...  It'd be wiser to trade down and pick up more than select these D-men so high.

If the Bolts wouldn't be interested in drafting Tavares, they likely would also pass on Matt Duchene and Evander Kane among the other highly touted centers.  LW Magnus Paajarvi-Svensson is interesting -- the highest touted wing on the boa

In the end, the implications are subjectively positive.  It's mostly win-win (if Tavares lives up to the hype) in selection or trade.  I'm never one to promote the idea of trading Vincent Lecavalier, but this would be a scenario where it would almost have to happen....  Not just for costs (as having 3 franchise-caliber center's on the squad would become unbearable on the cap), but also for the longevity of the team.  The fanbase might be behind Lecavalier in full, but to land Tavares would force a passing-of-the-torch from the era of Vinny and Brad  as the 1/2 center combo to the era of Steven and John.