Starting today, 10 days out from the NHL entry draft, the hockey blogs on SB Nation are doing a mock draft. Three picks a day, with the master list running through James Mirtle's From the Rink. He'll update the list each day with the next picks and links to each blog's rationale. 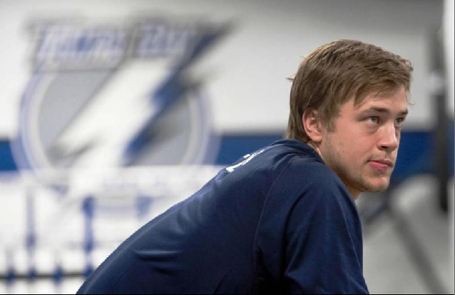 What exactly can I tell you regarding this pick?  Some fans might be jonesing over the potential of the offensive dynamics and long term possibilities if touted center John Tavares were to fall to #2 in the draft.  I've already touched on the possibilities in that scenario, and St. Pete Times beat writer Damien Cristordero touched on the subject just yesterday.

But offense can do only so much for the Lightning.  Last season should have shown fans that much.   Between mediocre play, injuries and a revolving door on the blue-line that opened last summer and stayed open for the duration of the season, the defense became the prime liability of Lightning hockey.

Assessing the failings of last season is part of why this draft must focus on defense, and that is why Victor Hedman, defensemen for MoDo of the Swedish Elite League, is the proper choice for the Lightning with the 2nd overall pick in the NHL Draft. 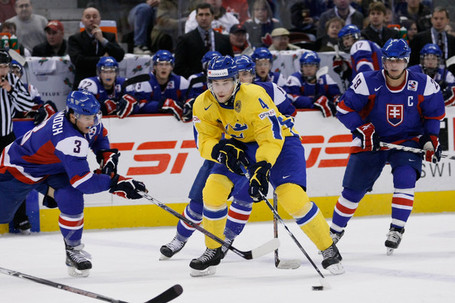 What have you heard about Victor Hedman?  Maybe you're aware of the fact that analysts and the columnists put him on par with John Tavares (meeting or exceeding him, in fact) when it comes to the level of skill they bring and where either player should be taken in the draft...  Tavares and Hedman are considered leaps and bounds above the rest of a highly touted draft class.

Here are a couple of quick, intangible facts about Hedman for those of you only know the guy by name and by the pictures that have been popping up here and there:

Standing 6'6", the 220 pound Hedman has played the past two seasons with MoDo of the Swedish Elite League, which has also produced notable NHL stars such as Peter Forsberg, Markus Naslund, and the Sedin twins.  Unlike CHL hockey, the Swedish Elite League is a mix of junior aged players and men -- meaning Hedman has been playing and contributing on a team that plays above the Junior hockey level.

Last season in the Elitserien (AKA the Swedish Elite League), Hedman was a +22 in 43 games for MoDo with 52 PIM.  Victor also notched 21 points (7 goals, 14 assists).  A nice little contribution from the big D-man.

More offense is not the answer, even if the team's 1st round draft history regarding d-men is a shaky one, meaning Matt Duchene and other forward prospects should not be considered by the Bolts.

The choice to us is clear that Hedman is the man for the Lightning...  His stats tell us one thing, his attitude tells us another and they are the right things.