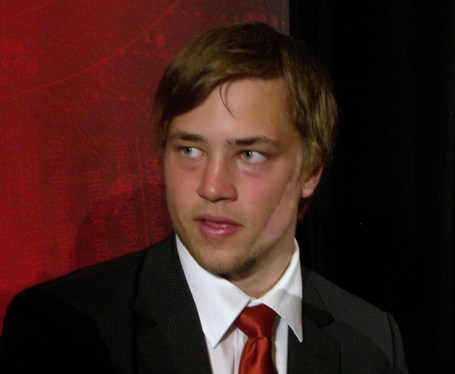 Welcome to Raw Charge's NHL Draft open thread and live blogging event.  We'll try our best to post news as they come to pass after the fold.

Everyone's invited to chime and contribute to the thread through comments.

Just before we even begin, Oren Koules tweeted on the Lightning's twitter account that he may announce the Bolts selection via twitter before taking the stage.

[UPDATE 5:23 PM] There's a lot of buzz and speculation that's quite bi-polar right now regarding Matt Duchene that I've seen through the day.  Greg Wyshynski has tweeted both that he had been told Matt needs another year in Juniors and that Matt is all but assured to go #1.  What an unlikely scenario that could play out...  -- JPFDeuce

[5:36 PM] Sportsnet is reporting that the Lightning are willing to trade their second overall pick - for the right price. --dagmar27

[5:38 PM] @mirtle "Bob McKenzie says he would be shocked if Tomas Kaberle was not a Boston Bruin by the end of the night." --dagmar27

[5:45 PM] @DefendingBigD "Hearing *Rumors* that the Stars are offering Ondrej Roman or Pettru Lindgren at the 8th pick for Kaberle. Supposedly on 590 the Fan in Tor." --dagmar27

[5:51 PM] Erik Erlendsson at the Tribune will be on WFLA Newschannel 8 during the 6 PM telecast to touch on the draft.  Tampa Bay residents might want to check on that...  I'm guessing Erik will be on somewhere after 6:18 PM.  Just a guess.  -- JPFDeuce

[5:58 PM] NHL EXPECTED TO FINALIZE CAP NUMBER FOR NEXT SEASON. it's not really that far off from where it was for the 2008-2009 season. Not sure why they decided the even bother changing it in the first place. --dagmar27

[6:01 PM] Scott Niedermayer has decided to play another year. Speculation now is that Chris Pronger will be traded soon. --dagmar27

[6:16 PM] Here's my tweet of the day so far, courtesy of Pension Plan Puppets who have people in attendance at the draft: @mlse "In other news, I brought a blanket so it would be just like my mom's basement here." --dagmar27

[6:20 PM] For those of you who don't want to listen to the Versus/TSN telecast tonight of the draft, nor do you want to listen to coverage on local radio, I invite you to check with our friend Chris Wassel at The Program on Blog Talk Radio.  Special draft night addition goes underway at 7 PM -- right at the start of the draft.  -- JPFDeuce

[6:26 PM] @cyclelikesedins "I find it odd how CERTAIN everyone is that HEDMAN is a star. Not saying he won't be, but how many Swedish elite league games did you watch?" He's been playing on the big league team for two years - I sort of think that might be why. --dagmar27

[6:45 PM] Roberto Luongo is reported close to signing a deal with Vancouver. He was mentioned in trade rumors no so long ago. --dagmar27

[6:51 PM] Who wants to see Chris Pronger in the Eastern Conference? @BroadStHockey "Pronger talk is very real. Buzzing around the draft floor. Could he be a Flyer tonight?" --dagmar27

[6:53 PM] we're at the cusp of the start of the Draft now.  I've been getting antsy looking around for Lightning related news.  The silence has been deafening.  Damian's last update at Lightning Strikes was rather general.  Brian Lawton just did another fluff tweet on the Lightning twitter account.  Substance, please guys!  I'm worried that when news does come out, it will be something fans don't like...  but that remains to be seen.   -- JPFDeuce

[6:58 PM] @kausatoday "Just told Lightning won't do anything with No. 2 pick unless NYI take Matt Duchene No. 1. Then Lightning may listen to offers." --dagmar27

[7:06 PM] It looks as if Jay Bouwmeester probably won't be traded during the draft. Although, anything is possible. --dagmar27

[7:20 PM] Chris Pronger is now officially in the Eastern Conference - and Anaheim made a killing off of this trade. @DarrenDreger "As TSN reported off the top of the show. Pronger traded to Philly. Deal is for Lupul, Sbisa and 2 firsts." The rest of the deal is: @mlse "Damn, it's the Pronger and some guy deal - Sbisa, Lupul, 2009 21st overall, 2010 pick, conditional 3rd in 2010." --dagmar27

[7:55 PM] Maybe the Flyers aren't finished...? @BroadStHockey "With Pronger, how do the Flyers fit Mike Knuble and Andrew Alberts under the cap?" --dagmar27

[7:57 PM] Apparently no one in Toronto reads the Miami Herald (see Bouwmeester post above). Surprise, Surprise. @DarrenDreger "Toronto is expecting Bouwmeester to get traded tonight and hope that generates activity around Kaberle." --dagmar27

[8:03 PM] I guess it's hard to keep up on the news while sitting in the stands. They seemed to have missed Reinsdorf's bid. @All_Habs "Bettman announced the Coyotes pick by emphasizing *Phoenix* Crowd immediately chants Ham-il-ton! Ham-il-ton!" --dagmar27

[8:05 PM] @DarrenDreger "Isles and Bluejackets have made a trade and will swap picks...moving the Isles to 16th." --dagmar27

[8:07 PM] Our friends over at Bolt Prospects already have a profile up for Victor Hedman.  I'd also like to say EE asks on twitter: @erlendssontrib "Could Lightning make a move to make another selection in the first round? They have a pair of seconds to dangle as bait????"  There's a lot of talent in this draft pool, anything is possible but this is the year to move up.  -- JPFDeuce

[8:18 PM] Jim at Blueshirt Banter got us a shot of Victor being interviewed: 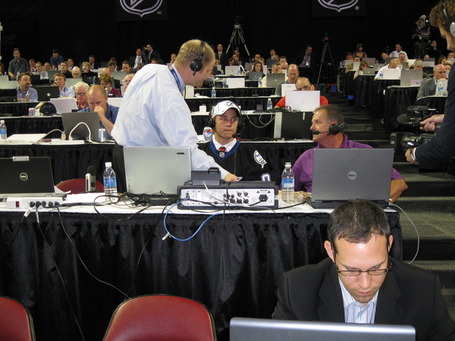 [8:21 PM] Interesting factoid. @BenThrashers "A reporter just pointed out to Kane that he's the highest-drafted black player ever. He was aware and is honored by it." Also interesting is that Atlanta as a large black population, so this could be a good marketing move as well. --dagmar27

[8:25 PM] Erlendsson's question posed on Twitter earlier bodes true:  The Lightning are looking to trade up into the 1st round again by using their 2nd round picks and potentially next years first.  that's a mighty big ransom to pay to move up.  I have a question though:  Who the heck do they have their sights on?  John Moore (as Cassie blogged about last week)? -- JPFDeuce

[8:36 PM] Worst pun of the night so far. And of course it's from our Toronto Maple Leafs blog, Pension Plan Puppets: "Did Someone Leave a Door Open...? ...because there's a draft in here!" --dagmar27

[8:54 PM] I guess the Islanders are stocking up now. Are these for actual players or bargaining chips for trades? @CraigCustance "Trade: Minnesota trades pick No. 12 to Islanders for picks number 16, 77, 182." They now have the 12th and 16th picks in the first round to go along with the first overal pick, Tavares.--dagmar27

[9:03 PM]  Some Olympic news amid the Draft coverage:  "@kausatoday "Hearing John Tortorella will be announced as one of Ron Wilson's U.S.Olympic assistants on Monday  "  That's quite an honor for our former head coach.  Congratulations John!  -- JPFdeuce

[9:07 PM] Poor Brian Burke. No one would play with him. @darenmillard  "brian burke just told me via text, tried hard for each of the top five.. never got to the offer stage with nyi, tampa wanted schenn" --dagmar27

[9:37]  Brian Lawton says that a player from the Lightning's Top 12 ranked players is still on the board (this was posted a few moments ago on Twitter) and that the Bolts were still interested in trying to trade up into the top 20.  I'm guessing John Moore, again.  This is not a fixation on the guy on my part, but deduction from Cassie that seems logical.  Moore was projected to be a pick that was to go as high as #9 and as low as mid-round.  He's still there.

[9:45 PM]  I've experienced 1st rounds of NFL draft's that have gone faster than this.  But I digress, this is not the point of my post.  Not by a long shot.

Another message from the Lightning braintrust, instructing employees at Bell Centre not to leave as "something big might happen" -- sounding like their is a trade brewing.  The Bolts are still interested in moving up...  But it seems almost bigger than that, just in fact they've instructed employees to stick around.  We'll see.  -- JPFDeuce

[10:21]  4 hours in and Moore is gone...  But Brian Lawton says there pick is still on the board, that top 12 ranked guy...  And they are still trying to move up.  What will it take?  Who IS that player?  We're trying to guesstimate it here and will have another update shortly. -- JPFDeuce