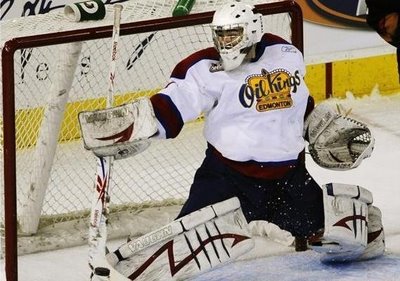 It would seem the ride of Torrie Jung and Michael Ward as TB prospects is now over.

Confirmed by Timothy at BoltProspects (and reported via twitter back in late May by Erik Erlendsson at the Tribune), Jung (a 7th round selection in the 2007 draft, who drew wide attention with his play during the WHL Playoffs) and Ward (also a 2007 7th round selection, who played for Cape Brenton of the QMJHL this past season) will be eligible to be selected by any team - including the Bolts - at the draft later this month.

The only thing that absolutely suprises me about this (more than the fact the Lightning would do well to be overstocked with goalie talent) is the fact there has been little to no fanfare in the news about Jung returning tot he draft pool.  Maybe because this is so common place among prospects?  Maybe because there is no proof Jung's playoff effort will be more than a one time thing?

Here is wishing both Ward and Jung the best of luck in the future and here's also hoping that another team is wise enough to draft them into their organization.