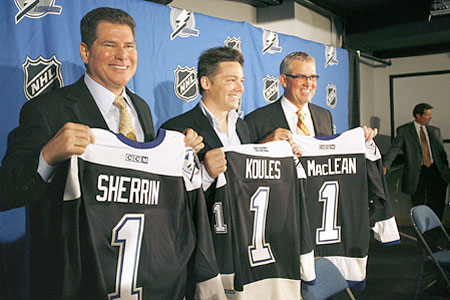 Two years?  Seems like yesterday...  no, strike that.  It seems like last week...  yeah, some distance but not that long ago at all...

What I'm talking about is an anniversary for the Lightning franchise and principle owner Oren Koules.  Two years ago this morning, a bolt out of the blue struck 401 Channelside Drive as it was announced that Absolute Hockey (Jeff Sherrin, Doug MacLean and Koules) had a deal in principle to buy the Tampa Bay Lightning franchise from then-owner Palace Sports and Entertainment.

Of course, Absolute Hockey fell down and went boom in November of 2007.  OK Hockey would be formed in December of that year and the sale completed in the late spring of 2008.  The observance of this date itself is of Koules introduction to the Tampa Bay area and his involvement with the team.

There is some infamy about this anniversary.  Infamy not geared toward Koules, Len Barrie, Brian Lawton or anyone else with current ownership and management.  August 7th was infamous in that it firmly placed the Lightning franchise's immediate future in limbo.  The promise of the 2007-08 season was dulled down and eventually muted all together with thanks to the stalled sale.  The delay with the transaction handcuffed then-General Manager Jay Feaster and what he could do with the team.  The Bolts could not take on (or drop) any significant payroll that would alter the franchises overall value.  Not until the sale was complete.  Not until everything was all set.

It's a limbo that the Atlanta Thrashers have been stuck in with ownership issues and the break up of Atlanta Spirit, it's a limbo that other teams in the NHL as well as other sports have encountered in the past.  It's dreadful for fans to have to endure...  But that's the business of the game.

Endure it, you will...  Because your love for the team outweighs a bad season mired in business.