Share All sharing options for: Steve Downie's shot at the top six 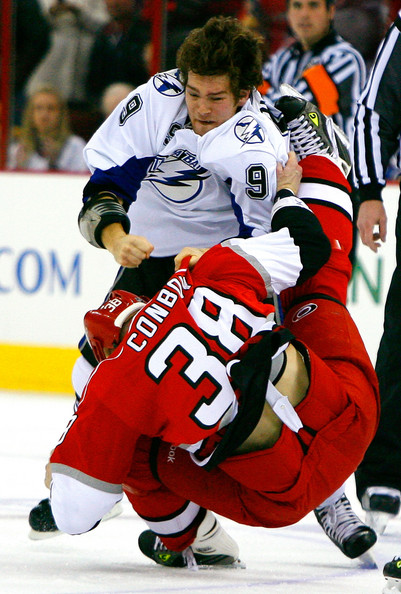 ....[Now] we come to the player with the most experience of the contenders for that right wing slot: Steve Downie. Downie's self-control and impulse-control issues do not permit him to be a serious contender for a top spot on the Lightning depth chart, no matter how much people admire his grit and skills he has... Think of raw nitroglicerine being transported on a bumpy road -- it's an accident waiting to happen. That's Downie, unless he mellows out at one point or another.

Right now, it appears I'm leaning toward the "dead wrong" scale of accuracy than anything else, in which case I should request some extra garlic on the helping of crow that I'm due to be served.

I'm not saying that Steve Downie will not be set off by something any time soon, or not do something that he or the team regret, but Downie has earned a shot at more than just playing time. After dropping his body fat index to 7.5 over the off season, he is getting first-line minutes with Alex Tanguay and Vincent Lecavalier during scrimmages at the Ice Sports Forum in Brandon.

My negative opinion of Downie was expressed over his reputation that he's earned through actions at all levels of hockey. The negative reputation is about all I've known... Not the former-first-round-pick status (#29 overall by the Philadelphia Flyers in 2005), nor his point-per-game output in the AHL (23 games at AHL Norfolk, 8 goals, 17 assists, 25 points) .

I had asked publicly here about Downie (after he shot out to a lead in our poll on the top-six RW poll. I didn't get much of a response... So I took the question over to our friends at Bolt Prospects and got myself educated on Downie.

Lemme throw out some quotes, first from Chad Schnarr :

If Downie didn't have the character reputation and you were going on pure hockey talent, it wouldn't be much of a question he'd be the leader at this point. Considering he's behaved himself when in Tampa thus far, that's why he's put there. (Stephane) Veilleux may end up with it because he's probably the most trustworthy, and (Dana) Tyrell is eyeing it down the line. This team will be most successful with a matured Downie on that line (or in the top 6). And don't think that Downie won't realize the importance of keeping his head on straight next to 13 and 4 (Tanguay and Lecavalier), or 12 and 91 (Malone and Stamkos) for that matter. I'd venture to say he's more apt to behave himself on a scoring line, than he would if he were told to just go out and annoy people on the bottom line.

And to follow it up, Pete Choquette also from Bolt Prospects:

He is one of the few guys we have who has the speed, skill, and ability to dig in the corners that is necessary to play on Vinny's line. Karsums can't dig. Veilleux doesn't have the skill. Smolenak doesn't have the speed. If there's one guy on the roster who can do it, it's Downie, and if he's committed to the Stamkos weight training program the way he supposedly has, I don't see why he wouldn't win that spot. Then it's going to be up to Vinny and Alex and Marty and the rest of the vets on this team to mentor Downie. I don't get the sense he ever really has had a mentor in his career.

While Downie will have to work extra hard on ice to shed questions about his character and the baggage of his reputation -- it is possible to do so. It's also possible that Downie makes one bad decision during a pre-season game and wipes out all gains that he's made.

I don't want that to happen. I want to be proved wrong. I'd rather have to eat crow (hefty, healthy portions, thank you) than have careless or reckless choices on-ice prove me right.

Perhaps this truly is in team leaderships hands, as Pete suggests? Vinny, Marty, Alex, Ryan and others need to influence Downie just as much as Downie needs to want to be influenced. There's also the influence of head coach Rick Tocchet.  Tocchet, who was a tough-guy himself back in the day, may have the respect and influence over Downie other coaches hadn't gained?  Tocchet's connection with Steve might be a prevailing reason why Downie is being given a shot at all.  Other teams and other head coaches would have sooner given up and assumed Steve a lost cause than play him with two of the most deft playmakers in the NHL.

To see a player realize their potential is something fabulous to behold. I'm hoping that's what we're in for this season:  a realizing of Steve Downie's potential that doesn't focus on his fists and his temper but his ability and skill instead.