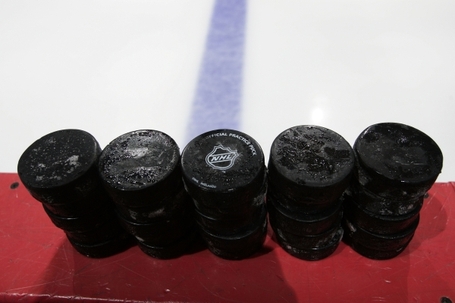 It's been a truth since mid-July that the Lightning have a pleasant little issue on the blue line.

I say "pleasant" because, in retrospect, this is an issue you'd rather the Bolts have than the issue that the team had last season. That issue is defense: Too many bodies and not enough roster spots. Too much skill and not enough minutes to go around.

I'll take that issue any day of the week over 22-warm-bodies used on the blue line during the 2008-09 campaign. Though it does cause logistics (and payroll) issues... It's better to have too much of something than too much of not-much-at-all.

Lets recap for a moment where the Bolts stand on D: Victor Hedman was drafted #2 overall in the NHL draft in June and will likely be a lock to stay with the team all season long. Mattias Ohlund and Matt Walker were signed on the first day of free agency, and shortly thereafter Kurtis Foster (former Wild defenseman with a cannon of a shot) was added to the defensive corps. Add the return of Lukas Krajicek, Andrej Meszaros and Paul Ranger and you have seven defensemen right there that are NHL-ready.

It's a given that Hedman isn't going to be given a brunt of minutes during his rookie season (unless he fully earns them through producing and effort, of course)... And Brian Lawton has suggested the Bolts will keep eight defensemen on the roster going into the 2009-10 campaign. Those two slots are what's up for grabs. Sparse playing time but NHL-level playing time.

That's where things get interesting.

David Hale, Matt Lashoff, Mike Lundin, Vladmir Mihalik, Kevin Quick, Matt Smaby, Ty Wishart... They're all vying for a shot at being part of the defense depth in Tampa. Two slots, seven players, and only so many opportunities to show why you belong with the Lightning and not the Norfolk Admirals to start the hockey season.

The inside track, at least from a fan perspective, on these slots go to Matt Lashoff, Mike Lundin and Matt Smaby. Two of the three (Lundin and Smaby) have been highly regarded by the organization for years now. Lashoff, acquired with Martins Karsums from the Boston Bruins at the 2009 NHL trade deadline for Mark Recchi, cannot be overlooked either.

What seems more likely is that NHL veteran David Hale (picked up in the Radim Vrbata trade along with LW Todd Fedoruk this off season) makes the roster out of camp along with Matt Smaby (who is on a one-way contract now). Hale has more NHL level experience than most of the Lightning's young defensemen combined. And while Hale does not figure into the Lightning's long term plans, he may be just what the team needs on defense: a truly part-time player as the eighth defenseman.

And the #7 defensive slot? Whomever were to fill that roll would be in regular rotation in the Lightning defense. While young Victor Hedman learns the ropes, when others in the top-six defense pairings need to be rested for "body maintenance" -- the seventh defensemen would be a regular substitution.

It's tough to figure out just what the Lightning will do in the end, but this is an educated guess. Brian Lawton has publicly suggested he will try to pull off a couple of trades during preseason and one would think that these deals would address the backlog on the blue line. It'd certainly be wise to take depth where it exists and either look to further upgrade quality, or perhaps swap it for system depth at other positions (such as right wing). But the contradiction that establishes a fact is: There are two slots up for grabs, and seven guys who already appear roster locks. That means someone from that group will be targeted to be moved.

That, possible player movement, takes anyone's educated guess and ultimately throws them out the window. In addition, Smaby, Hale and Mike Lundin all need to pass through waivers to be sent down to AHL Norfolk or recalled by Tampa Bay during the regular season.

The Bolts would sooner be willing to lose Hale than Lundin (who was stuck in Norfolk for most of last season due to the team not wanting to risk losing him on recall waivers). Lundin has expressed, through his agent, a desire to be traded if he does not make the team and Brian Lawton has express just how high the Bolts are on Mike and how they don't want to just give him away.

It's an interesting situation. There's only so much time before it gets ironed out. And only so many chances for players to secure their place with the Lightning this season.