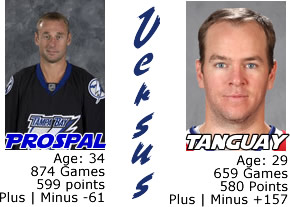 There's been a memo going around in comments on some of the local newspaper websites and on at least one of the fellow Boltosphere sites, comparing Alex Tanguay and Vaclav Prospal directly. People are looking rather shallow-like at the stats and saying "the players are exactly the same, this is a waste!"

Lemme cite Bolts by the Bay and one of their two qualms regarding the Lightning off-season as an example of this. I don't do it to spread ill will between Bolt blogs (just the opposite, check out Bolts by the Bay for a different perspective on the team) but illustrate the sentiment against the move:

The Vinny Prospal contract buyout bothers me. Why not try and trade him? And why buy him out to go after someone with a bigger name, but very, very similar numbers in Alex Tanguay. The argument here for Tanguay will be that he had/has the potential to score more points then Vinny did, but his numbers have steadily decreased year by year. 80 point seasons are great, but this isn’t 2006 anymore. Tanguay is younger than Vinny, but we all know that in hockey 34 isn’t really that old! Look at Mark Recchi. The guy will be 42 this season, and he had 60 points last year! Apparently Vinny Lecavalier, and Marty St. Louis pushed hard for the signing of Tanguay so i’m sure they know something that I don’t (besides how to be rich, and play hockey really well, and speak french) The reports on the deal say it’s for one year, so at least if things don’t work out, we wont get hung with his hefty contract. Probably a good thing since we are still paying off that Prospal buyout.

Let's start with the five year age differential that was noted. That means Alex Tanguay has put up in nine seasons and 659 games in the NHL, comparable numbers to what Prospal has put up in 12 seasons and 874 games.

If it hasn't clicked yet, my point here is productivity and point ratio. Tanguay has been more productive (580 points and a .880 point-per-game ratio) in less time than Prospal (599 points, a .685 point-per-game ratio).  You can  make excuses why either players point totals are where they are (where they played, who they played with, situational stuff, etc), or dismiss it entirely because it's all-of two-tenths of a point difference,  but the fact remains that Tanguay has a scoring advantage over Vinny20.

There's also a matter of Prospal having horrible statistics on the penalty kill and defensive situations. His career plus-minus is -61 -- meaning he's been on-ice for more goals scored against his team than for goals scored by his own team. His seasonal average is near -7 and he was -20 last season alone.

In comparison, Alex Tanguay is +157 (an average of +17 per season) and was +13 last season in 50 games with the Montreal Canadiens.

For a team like the Bolts that struggled greatly in one-goal game situations last season, having a weak link defensively is asking for trouble.  Having another top-line forward that is strong at both ends is much more valuable to this team.

An argument for keeping Prospal instead of signing Tanguay is the fact Vaclav is to be paid for more seasons to come with thanks to the buyout.  Tanguay's contract is on top of that.   Why not just keep the offense of Prospal's for as much of the season as possible (overlooking the defensive liability) and try to deal him later on?

The problem with that is Prospal had a no-trade clause which he declined to waive. That (adding the no-trade clause) was a mistake made when negotiating his contract last off-season. There was no way to move the guy who did not want to be moved (unless team management wanted to threaten him a-la Dan Boyle).  That's why he wasn't involved in a salary-dump trade and was instead bought-out.

And even if he had waived his no-trade clause, how do you suppose people will react when a deal is announced that Prospal was traded to a team for next-to-nothing?

He was a fan favorite, that's understood... But he wasn't the strongest cog on ice. He made his contributions but he shouldn't be played up as one of the marquee wings in the game, responsible everywhere with no liabilities.

Tanguay's liability is that he doesn't shoot the puck (though his career shot percentage is over 19%) which can get insanely frustrating.  He's a passer, a strong skater and responsible at both ends. We've already dealt with that before, Lightning fans, in Freddie Modin. That didn't exactly hurt, did it?