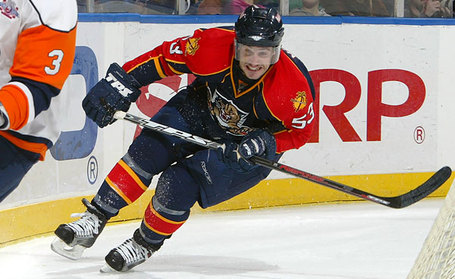 Veteran center Brett McLean (last with the Florida Panthers) has been invited to Brandon to participate in pre-camp activities with the Tampa Bay Lightning.

It’s an opportunity and that’s really all I can ask for,’’ he said. "There are no guarantees here and that’s what a tryout, is all about. I know it’s important for me to come out and show what I can do right from the first day, that’s not a lot of room for margin of error.’’

McLean had been placed on waivers/bought out by the Panthers prior to the start of free agency.

With a number of centers already on the roster, this looks like a move made for competition sake, if not extra depth.  It's not a signing, of course, but it pushes younger players to step up -- because there's a veteran in camp with a track record of chipping in offensively.

Brett was also famous last season for mixing it up with Sidney Crosby in January 2009: