Lightning marketing campaign to hit the streets of Tampa

Share All sharing options for: Lightning marketing campaign to hit the streets of Tampa 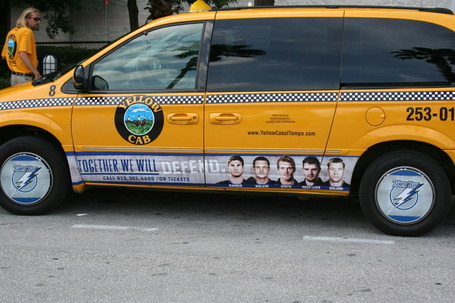 Yellow Cab has agreed to put our campaign on 300 of their cabs... SO COOL!

300 Big Yellow Taxis (cue Joni Mitchell) zooming around the area with the Bolts on board...  Not a bad job with brand exposure...

This is another colorful marketing decision by the Lightning to get the name and the faces of the team out in public view.  The Bolts marketing team has worked heavily during the off season on getting the campaign and the brand out there.  You saw, earlier in the summer, when the Bolts launched an interactive season ticket push that was much better than the intrusive campaign employed by another team in town.

In fact, you have to deliberately be avoiding advertisements to miss out on the Lightning the last few weeks.  "Together We Will" and mention of last month's Fan Fest have been in print and online ads for weeks on end.

This has been a far cry from just a year ago by the Lightning, who stopped promoting the team afte the "Seen Stamkos?" campaign ran it's course.  Oh, they were still making waves with moves by the team....  But with a brief training camp in the area and then shuttling off to Europe for exhibition games and then the start of the season, it was easy to forget that the NHL season had even begun for the local team.

This year?  Quite the opposite...