I have made it through my first weekend of festivities and now that the late games of the hockey tournament have started to kick in, the tiredness has started as well. When you get told you look tired, it's almost like a badge of honour because you know that means you've been enjoying to events to their fullest.

It's not like I only care about hockey since in the last few days I've learned a ton about speedskating and moguls skiing, but since it's tournament style over a two week span, hockey will become something that the whole city will get in to. It also helps that Team Canada has the potential to do well and that this city is hockey mad. The game on Sunday against Team USA is one of the most talked about in the tournament and should promise to be a good game.

So what have I learned so far in 6 days of the Olympics?

Team Canada has sold a lot of jerseys and Russian tracksuits are kinda awesome, let me explain

Any hockey game you watch or any given night downtown the city is flooded with Team Canada jerseys. Never have I seen so much country pride, accompanied by singing in the streets of Vancouver and tolerance for Dany Heatley. I've been counting player names on jersey's, right now of Canadian ones, Nash and Iginla have taken the top numbers, with Luongo, Brodeur and Crosby right behind.

But it's not all Team Canada, no we have plenty of people showing their country pride. There are USA jerseys, Swedish ones, Finnish ones, Czech hats (oh yes, they have hats) and soccer scarves. Oh and Russians have tracksuits. Let me introduce you to them: 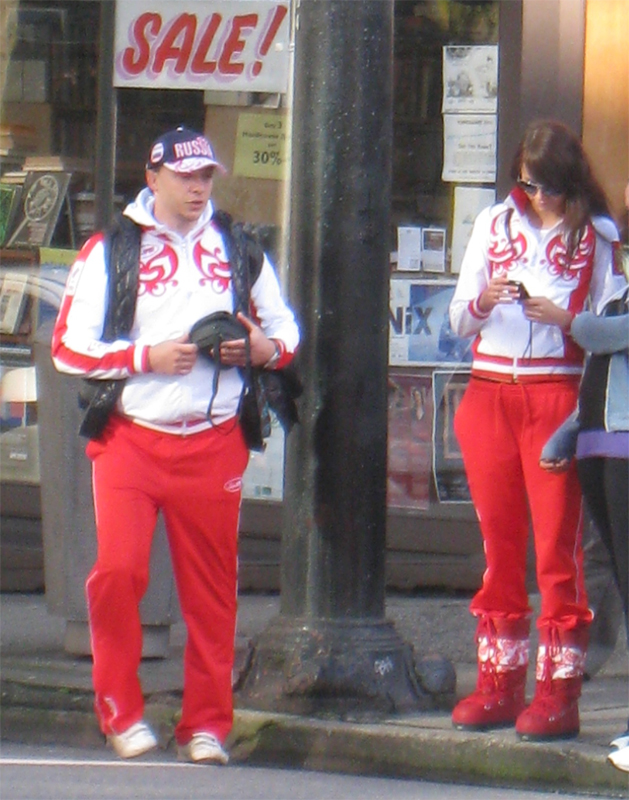 Yes tracksuits. And these are not cheap ones, they are worth about $400.  What you can't see in the photo, is the fact that the girl has on matching boots. No joke. In a certain terrible country fashion pride, I kinda love the tracksuits. Feel free to disagree in the comments...