Esposito is not a front office cure-all for Lightning

Share All sharing options for: Esposito is not a front office cure-all for Lightning 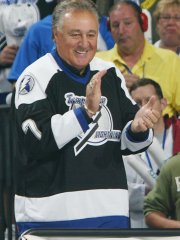 It would seem like every time there is an issue with the Lightning franchise, the name of Hockey Hall of Famer and franchise founder Phil Esposito is invoked.  Esposito's name, to long time Lightning fans, brings with it the thoughts of security and the sense that Phil could fix it.  No, wait, Phil should fix it and Phil will fix it.  Phil is the guy to fill this seat, that seat, and wear the ownership hat on top of it.

Need a coach?  Just hire Phil.  Have problems with Lawton (or Feaster, or Dudley for that matter)?  Why not bring back Phil?  Looking for an executive to take over the role of team president and franchise governor?  Phil Esposito is available.  And when the Lightning's recent ownership situation was coming to a head, Phil putting an ownership group together was going to solve everything.

It's a reflection of fondness, admiration and respect that long time Lightning faithful have for Phil Esposito.

The problem is, it's not only a reach, but it's an unrealistic label of a panacea - a cure-all - on Phil's back.

Long time Bolts fans know of the true emotional love of the Lightning that Esposito has, and they know it well.  They can hear it in his voice when he remarks about the team on 620 WDAE broadcasts, they've read about him and heard more from him over the years concerning the team and how it's endeared to him.  In fact, a handful of fans out there look at the franchise as explicitly his property.  And because of his hockey resume - the on ice records, the off-ice service, the ability to seal a deal, and the ability to head-fake - proves why he would be perfect for (insert role here).  His love, his emotional tie, his commitment, and his  willingness to do whatever it takes for the betterment of the franchise.

And the fact escapes that Phil Esposito has held no executive role within the NHL since his ouster as general manager and president of the Lightning in 1998.

Yet Phil is the guy to take over, or so says the team faithful...

Part of that is no-doubt inspired by nostalgia of the memories from the first few years of the franchise's existence.  Nostalgia is good, nostalgia is great.  And while I am at it, visit Stuck In The 80's for another dose of nostalgia.

Yet, when you have nostalgia brought back to serve in the current, there is a harsh reality that surfaces shortly after the implementation of the new, old standard:  You can't relive the past.  Things change and the past is done and gone.  While you will always have reverence for times (opening night 1992 at Expo Hall, the 1996 playoffs), places (Expo Hall, Thunderdome) and people you've come across, you must move forward with life.  It is no different with this team.

Phil may have served in the past, but his last tenure was 12 years ago.  Last time Tampa Bay fans were suscepted to someone returning to the game after a long layoff, it was Barry Melrose.  The game had changed since he had last coached in the NHL, and it showed in his approach to coaching.  The very same applies in Esposito's case:  The game has changed, as has general franchise management since his days as the Lightning's top executive.

Beyond nostalgia, there is another reason to be hesitant with Phil in control in a front-office capacity.  It's an asset and a liability at the same time:  his love.  Emotion can and will get in the way of sound decision making.  You don't have to look any further than OK Hockey to see how it can lead to mistakes (even with good intentions) in running a business. Phil's own dismissal from the Lightning front office showed this flaw as well.  His firing in 1998 was brought upon him by exceeding the budget set by then-owner Art Williams, investing in cast-offs and one-hit wonders in an attempt for a quick-fix to a franchise that Jacques Demers (then head coach and Esposito's successor as GM) later described as a bare cupboard.

A quick-fix to roster that had been gutted by poorly done salary-dump trades a year earlier by Esposito himself.

With the comparison of Phil to OK Hockey comes with it the counter-argument:  Phil doesn't compare.  That's brought on by the respect for Phil and what he's done in Tampa Bay.  Some people never respected the late Bill Davidson, who was seen as more concerned about his Michigan sports-entertainment empire than about the step-child team in Tampa.  Respect for OK Hockey never quite existed for a majority of the fan base, with thanks to the jettisoning of fan favorites and other actions/transactions with the franchise that seemed made for personal reasons.

But there is respect for Phil.  Phil knows the team, because Phil cares...  And we know Phil cares because he's here.

This entire post is inspired by an argument I got into the other day, brought on by the news that former team president Ron Campbell is looking to resume his role under Jeff Vinik's ownership.  My argument about nostalgia-as-to-moving-forward was originally made with Campbell in mind.  Ron is a sound businessman and while I was comfortable with him resuming control of oversight of the team, I had reservations, fearing falling into the trap of returning-to-the-past wishful thinking (knowing that you can't go back again).

But when a friend and media colleague invoked Phil as the answer - I cringed.  This wasn't (and isn't) so much as a disrespect toward Phil and all that he's accomplished in the sport and for hockey in Tampa Bay.  It was, however, the loyalty that looks past the overall franchise direction and puts Mr. Esposito on a pedestal.

Phil will never be done with hockey, and that's a happy fact to be assured of.  Yet his passion is a double-edged sword, and his love for the team would eventually hurt the team again if he were to resume a role of power with the franchise.  All the fuzzy faxes in the world and publicity-stunt signings would not prevent this.  It's best to look elsewhere and move forward.