There is breaking news post-game of tonight's OT victory against the New York Rangers.

Chris Botta of NHL Fanhouse / NYI Point Blank has reported via Twitter that the Lightning have (or will) acquire Dwayne Roloson from the New York Islanders. This has now been confirmed by Erik Erlendsson of the Tampa Tribune. 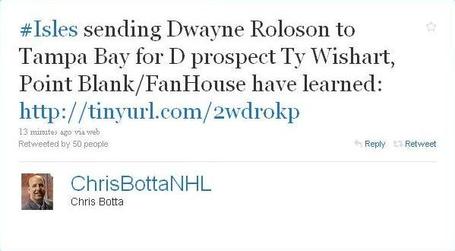 The trade immediately shifts the narrative of the Tampa Bay Lightning goaltending situation and creates more questions on what happens now with Mike Smith or Dan Ellis -- the two goalies who had struggled most of the first half of the season (despite the Bolts ultimate =winning record). Coach Guy Boucher, in post game comments, made a remark that Smith and Ellis would continue to be worked with but Roloson was a great opportunity for the club.

This also signals another cog from the Dan Boyle trade now jettisoned from the organization. Ty Wishart departing is ultimately a cost that needed to be paid in order to upgrade the goaltending situation, and may have proven expendable when reviewing the Lightning's plans for the future.

Wishart, a former first round pick with the San Jose Sharks, has seen all of five games the Lightning during the regular season since his acquisition in summer 2008. All were played during 2008-09.

An official press release from the club is below the fold.  We'll have more on this in the coming hours and days.

"In this trade we give up a promising, former first-round pick.  We wish him luck in the Islanders organization," Yzerman said.  "In Roloson we have acquired a proven, veteran goaltender who will provide stability in net."

Roloson, 6-foot-1, 170 pounds, has played in 20 games with the Islanders this season, posting a 6-13-1 record, a .916 save percentage and a 2.64 goals-against average.  He leads all New York goaltenders each category as well as games played.

A native of Simcoe, Ontario, Roloson has played in 532 career NHL games, posting a career 2.66 goals-against average and a .910 save percentage.  He was named to the 2004 NHL All-Star Game.  Roloson has played in 33 career Stanley Cup Playoff games, posting an 18-12 record with a .915 save percentage and a 2.56 goals-against average.

Roloson was originally signed as an undrafted free agent by the Calgary Flames on July 4, 1994.