The long wait is over. At noon today we will finally see what we first learned of via Icethetics just over two weeks ago: The Lightning's new uniforms for 2011-12, and their modified logo.

The press conference is set to include more information than just that though (or at least, that was the previous plan), including information regarding renovations of the St. Pete Times Forum.

We'll do what we can to update this thread itself with images and other information, but keep an eye on comments in this thread for the live chatter building up to today's revelations.

AND HERE THEY ARE: 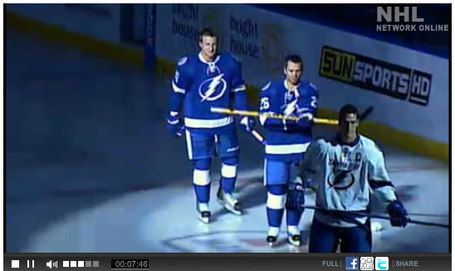 ALONG WITH VISION AND BRAND ASPIRATION

TAMPA BAY - The Tampa Bay Lightning, as part of a complete brand and business transformation, unveiled a new logo, along with home and road jersey systems today at the St. Pete Times Forum. Chairman and Governor Jeff Vinik joined Chief Executive Officer Tod Leiweke and General Manager Steve Yzerman, revealing a long term vision for the organization, focusing on four key stakeholders: the team, the Tampa Bay community, the St. Pete Times Forum and most importantly, the fans. That vision is for the Lightning to be “A world class organization winning at the highest level and unifying Tampa Bay through the power of Lightning hockey and legendary events.”

The team will continue wearing the current logo and jerseys through the end of the 2010-11 season, although the new logo will begin to have a presence immediately in and around the St. Pete Times Forum. For the first time in NHL history, an organization is being permitted to phase-in a new logo during the season, symbolic of the Lightning franchise’s dynamic transformation.

“This is a great day for the Lightning, our fans and the Tampa Bay community,” said Vinik. “Nearly a year ago, when I purchased the franchise, I envisioned a world class organization being run by the best people in the industry. Tod (Leiweke) and his staff have created an exciting long-term vision, built around the core values we all believe in, while Steve (Yzerman) has done a great job transforming the hockey team. The logo change is very emblematic of our new direction.”

The vision for the franchise includes a team inspired by championship values; an organization committed to Tampa Bay, giving back through leadership, mentoring and charitable contributions; a state-of-the-art venue; and the recognition that our greatest assets are our fans.

The Lightning worked with SME, a strategic brand development firm servicing the sports and entertainment industries, to create the new logo. “Bold”, “classic”, “iconic” and “hockey-centric” were the words that inspired the new designs. The previous circular logo shape was evolved into a contemporary oval shape to better represent the speed and power of NHL hockey competition as well as the upward direction of the club. One color, Tampa Bay Blue, was retained to honor the past and represent leadership’s commitment to the area.  In order to create a more uplifting overall presentation – bright, wide white stripes replace the silver and black, providing a brighter presentation of the Tampa Bay brand.

“When a player pulls on the Lightning sweater, we want him to know exactly who he represents and what the mark he is wearing stands for,” said Yzerman. “The long-term goal is for the Lightning to be an iconic franchise, rich in tradition with championship values and a strong legacy.”

Today’s announcement marks the first in a series scheduled by the team detailing the brand and business transformation. On Friday, February 4, all fans in attendance at the St. Pete Times Forum for the team’s game against the Washington Capitals will receive a complimentary t-shirt featuring the franchise’s new logo.