Raw Charge / TiqIQ want you to "Take a Seat"

Share All sharing options for: Raw Charge / TiqIQ want you to "Take a Seat"

Since last spring, during the playoffs, Raw Charge (and the SB Nation network in general) has been in a partnership with TiqIQ, offering fans the ability to find tickets through the web site for upcoming games.

At any rate, we're introducing a contest for TiqIQ called "Take A Seat", being run specifically through Twitter. You'll have a chance to win two tickets to a December / January Lightning game of your choice. Here's how it works: 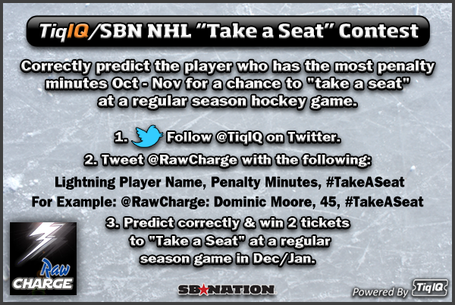 1. You can enter as many times as you'd like, but the final cut off is October 31st. No whining when November rolls around and you missed the window.

2. The total PIM count includes all games up until the end of November. Keep the current totals in mindwhen you enter and, better yet, play around on Hockey Reference and check out each player's past splits to see how penalized they have been during October/November in the past.

3. The winning entry (or entries) has to be the exact PIM total. No Price is Right rules. It is a contest after all.