Welcome to the neighborhood: A look at changes needed around Lightningville

Share All sharing options for: Welcome to the neighborhood: A look at changes needed around Lightningville

It's safe to say that anyone who hasn't visited Tampa's Channelside district in the last 20 years wouldn't recognize the place. Gone are empty, decaying warehouses, storage yards surrounded by chain link fence, and unnavigable service roads. They've been replaced by an aquarium, luxury condominiums, hotels, a convention center and a streetcar line.

Sitting in the middle of it all is the building that we Lightning fans consider the center of our hockey universe, the St. Pete Times Forum, home of the Tampa Bay Lightning.

The neighborhood is a lot nicer than it was back then, but there's still some work to do. Especially with extremely high profile events headed to Tampa in the very near future. Now is the time for city government and the business community to get together and start developing the area to it's true potential.

Originally designed by architectural firm Ellerbe Becket and constructed at a cost of $139 million, the Forum opened as The Ice Palace in 1996, serving as the home of the previously nomadic Tampa Bay Lightning. The decision to place a 20,000 seat sports and entertainment venue in that area of downtown was part of a boom that began when the Tampa Port Authority pushed for development of land they owned at the time. This led to the construction of Channelside Bay Plaza, the Florida Aquarium and continued with the TECO Streetcar Line, and the Tampa History Center, creating an entertainment corridor between downtown Tampa and Ybor City. Soon after, the housing bubble that consumed the Tampa Bay area resulted in the construction of residential dwellings with condominium towers and loft apartments.

In spite of all of this, the area remains an unfinished work-in-progress, not unlike the Forum itself which is currently undergoing $40 million worth of privately-financed renovations. We don't want to overromanticize the fact that Lightning owner Jeff Vinik is funding these renovations himself: he's a businessman and is making an investment in his product that he expects to pay him back in profits over time. He's not doing it as a humanitarian gesture to the community (although the Lightning Community Heroes initiative and other charitable efforts are another story). There's nothing wrong with that and that's not to say that we in the community won't reap the benefits. With the NCAA's Frozen Four Tournament headed to Tampa this spring and especially with the Republican National Convention coming next fall, now is the time for Tampa's civic leaders, private and public, to make a similar investment that will benefit them and the community as a whole over time.

The city has already invested heavily in the area with the creation of the Tampa Riverwalk and Cotanchobee Fort Brooke Park and the private sector is undoubtedly reluctant to invest in new ventures with the current state of the economy. Still, they need to work together and find a way to get things done for the sake of the city's ability to attract high-profile events in the future. Here are four areas, in no particular order, that need attention.

The most visible example of this is the restaurant located at the corner of Old Water Street and Channelside Drive, the former home of Newk's and later, The Hut. There are a few other abandoned buildings in the area, but none are as close to the Forum. And frankly, none are as in such sad shape. Once a vibrant pre- and post-event gathering spot, the place has been closed for a couple of years and fallen into disrepair. A few months ago, someone taking up illegal residence on the premises started a small fire that damaged the outdoor deck before being contained. Windows are broken and gates to keep people off the property are damaged.

BEST CASE SCENARIO: This place, when managed well, used to be packed on event nights. Seems like someone looking to open a restaurant within proximity of a venue that routinely brings in tens of thousands of patrons could do worse than fixing up this place and re-opening it. Maybe if they asked really nice, the heirs of the late Jack Newkirk (former Newk's owner) would let them use the old recipe for crunchy grouper sandwiches.
AT LEAST...tear the place down. A number of local demolition experts were asked what it would cost to raze this building and the general consensus was around $30,000. If it's not going to serve its intended purpose as a bar and restaurant, it might as well be another one of the following... 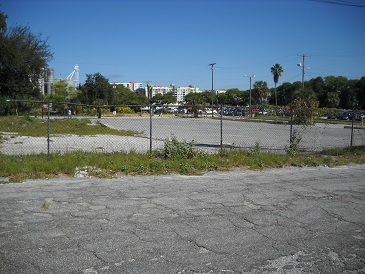 I can't call these parking lots because they're not. Specifically the lots off of Caesar Street at Eunice and Cumberland avenues (seen below). In many cases, they're concrete slabs left from buildings that were torn down 10 years or more ago and nothing has been done in the way of maintenance to them since. Some aren't even that. They're uneven surfaces strewn with debris, huge potholes and unmanaged vegetation. A quick search of the city's Code Enforcement office's web site doesn't mention anything specific in terms of parking lots, so the people who park cars there may not be doing anything illegal, but it would be nice if they cleaned the places up a little. 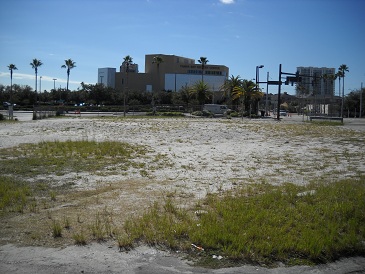 BEST CASE SCENARIO: No doubt there are those who look at these pictures and instantly start salivating like Homer Simpson: "Mmmmm, Rays ballpark". But that's probably not realistic, at least in the immediate future. So instead, just clear them out, pave them over with new asphalt and add a couple of street lights. Better yet, find a way to be "green" about it; plant sod instead of paving, put in some trees and bushes...and add some streetlights. There's no reason these lots shouldn't be as nice as the ones at Raymond James Stadium.
AT LEAST... haul off some of the bigger junk that's been sitting out there for years and then run a road grader through there.

To some extent, the streetcar gets a bad rap. If you're out on the town and your night includes visits to the Forum and/or Channelside Bay Plaza and you also want to visit Ybor City, the streetcar is a pretty good transportation option (also, parking in Ybor is almost always cheaper than parking around the Forum). But the complaints that that's all it's good for are valid. Currently, the line ends at the corner of Franklin and Whiting Streets, right in front of Hattrick's Tavern. To really be a viable means of transportation for people who want to explore all of downtown, it needs to extend north to the Straz Center (formerly the Tampa Bay Performing Arts Center).

BEST CASE SCENARIO: The streetcar is not a moneymaker and as a result, there are no plans to extend the line at this time. Even if they had the money and started today, they probably wouldn't get as far north as Kennedy Boulevard by next fall. So in this instance, the Best Case Scenario is:
AT LEAST... extend the hours of service on event nights. I realize there are budgetary concerns but during certain peak times, specifically events taking place at the Forum, there should be a flexible schedule that allows the cars to run until midnight or later. As of now, they stop at 10:00 PM, Monday thru Thursday. Nobody wants to make the choice between leaving a game that may go into overtime or being stranded. Of course, if it started running before 11 AM on weekdays, maybe commuters would consider using it and budget shortfalls wouldn't be as big of a problem. But that's an issue for another forum.

[Note by John Fontana, 10/28/11 12:58 PM EDT ] Clark posted in comments but I'm adding them here, HART clarified operation of the Streetcar on gamedays via Twitter:

"The streetcar has extended service during @TBLightning games. We hold one last car until 15 minutes after the game ends."

Channelside and Ybor aren't for everyone. Unfortunately, there aren't currently a lot of options for pre- and post-game entertainment otherwise. Downtown Tampa is getting there. On most nights, it's still not as lively as St. Petersburg or even Sarasota, but there are actual people living there now and you don't get nearly the ghost town vibe you got as recently as three years ago. There's plenty of room for improvement, though. The fact that the ubiquitous Starbucks doesn't have a stand-alone store in downtown speaks volumes. There are all kinds of empty storefronts that could be occupied. I'm not sure we necessarily need more restaurants but anything would be better than "For Lease" signs. Establishments of any kind that are open after 5:00 PM and welcome browsing would encourage pedestrian traffic.

BEST CASE SCENARIO: The city needs to find creative ways to encourage businesses to open downtown, such as lease subsidies, and for people to come downtown to visit. They also need to address conditions like uneven sidewalks, high curbs, vehicle-only roadways and other conditions that resulted in it being named the second most unfriendly pedestrian area in the country for people once they get there.
AT LEAST... with no gas stations or real convenience-type stores downtown, I've been saying for years that the person who opens a full-service 7-Eleven downtown would become very wealthy, very quickly.