Visitors to Tampa Bay who have pre-conceived notions about the area's association with the sport of football might be surprised at how they're greeted at the airport. The Tampa Bay Lightning have taken another significant step in establishing their identity in the Tampa Bay community by entering a promotional partnership with Tampa International Airport (TIA).

"Going to a hockey game is a lot of fun, and we want to have some fun out here at the airport and bring some attention to one of Tampa Bay's favorite sports teams. Lightning fans love their hockey. We do, too." -- TIA CEO Joe Lopano

"I looked at our visiting team fans my first season, and at times, I saw too many visiting team fans. But, in fact, we believe that more people travel to come to see games here in Tampa Bay than perhaps any other city in the NHL and they come right here through this airport. Tourism is a huge deal to our community. So we've come all the way around. We actually support those visiting team fans and we encourage them to come here. Because Tourism is a critical, critical part of our economy." - Lightning CEO Tod Leiweke

The airside tram connecting the TIA's main terminal to "Airside A" has been wrapped in a "Go Bolts" theme and the recorded voice of Lightning captain Vincent Lecavalier will greet passengers on that tram as they head to and from the terminal.

There are also opportunities for fans to win prizes. A pair of round-trip tickets from Edelweiss Air, the airport's newest international carrier was given away at the game on October 20th and another pair was given away through a "seek the seat" Twitter promotion the next day. Also, anyone parking at the airport is automatically eligible to win a four-pack of tickets to an upcoming Lightning game. One winner will be chosen each day from now until the end of the season at the exit to the airport parking garages. Paul Vlna of Wesley Chapel (pictured below) was the first winner, selected today as he left the airport after returning from a wedding in Ohio. 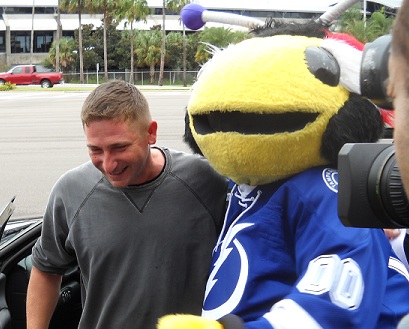