More than 100 girls from around the Tampa Bay area showed up Wednesday when the Tampa Bay Lightning opened the St. Pete Times Forum, including the ice, for "Girls Play Hockey Day". In conjunction with the Girl Scouts of West Central Florida, the event is designed to give girls a look at the world of professional hockey at the NHL level while inspiring a deeper appreciation and understanding of the sport itself.

"It's neat that these kids are excited about our team. They want to see it, they want to play hockey. Some of these kids have never even held a hockey stick in their hands and some have never even been here in the building before. So it's a cool experience for them." - Dave Andreychuk, Vice President of Fans and Business Development and former Lightning captain

In addition, participants received special Girl Scout merit badges, dinner and tickets to the Lightning's game against the New Jersey Devils this Saturday night. More than just a peek behind the scenes, the girls were given the opportunity to suit up in hockey equipment and hit the ice.

"The first event we did with the Girl Scouts (last year) focused primarily on job opportuniities and they came out to the arena and talked to some of the different women who we have here at the executive level about their careers. We asked them to fill out an evaluation and we asked the girls 'what would you like to see next time?'. Every single girl said 'I want to get on the ice.' So we saw that desire and worked with USA Hockey to make that happen this year as well. This is year two of hopefully many years to come." - Alison Goodman, Senior Group Event Coordinator

Former Lightning captain Dave Andreychuk gave guided tours of the Lightning's locker room and workout facilities. He also talked about safety and hockey equipment, using his own personal gear for the demonstration as well as a glimpse into the beginning of his own career as a player.

"I don't like to tell people this and make sure you don't tell anybody else, but when I started out skating, I actually wore figure skates. My mom doesn't like me telling that story too much." - Dave Andreychuk

"We want to grow the game of hockey in Florida and this is a great way to do it. We have a sold out event tonight where we'll be going over some of the basics of the game. We'll do a little skating, a little stick handling, some passing and shooting. We have two groups of girls, divided by ages. Each group will be on the ice for 45 minutes. We just want to get them interested in hockey and maybe they'll go from here and play the game at one of the rinks here in the Bay area." - Brian Bradley

Charli Solis of Ice Magazine was on hand to talk to girls about the growing movement of hockey as more than a spectator's past time for women. The numbers in attendance certainly reflect that trend as last year's event drew about 80 girls and this year, the club actually had to establish a waiting list for those who couldn't get in.

"We're looking into doing more than one night in the future. Last year, we had to borrow the equipment but this year we actually purchased all the gear, so it's ours and we can use it whenever we want." - Alison Goodman

One of the girls who did get in was Brianna Lapwing, who was there with her father John.

"She (Brianna) figure skates but this is the first time she's played hockey. I think it's great. Getting out here with Brian Bradley and Dave Andreychuk, this is just awesome. She'd love to join a league, but I'm not sure if we can convince mom yet. " - John Lapwing 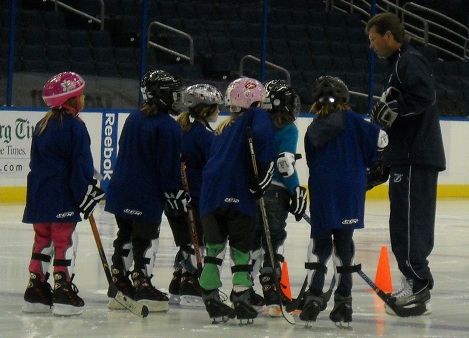 Brian Bradley coaches a group of skaters through some on ice agility exercises. 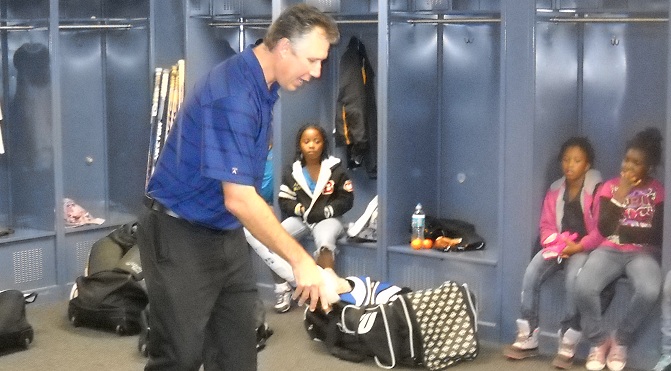 Dave Andreychuk talks about the tools of his trade. 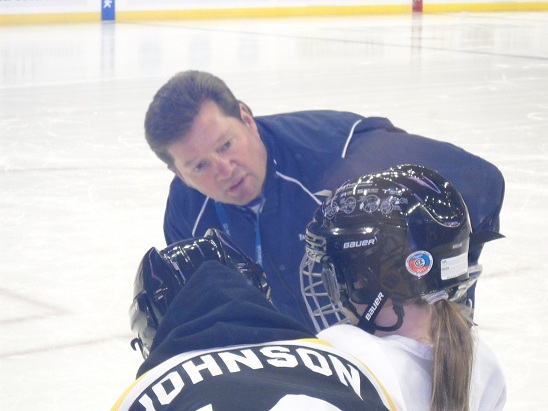 Bradley offers some personal instruction and encouragement to a first-time skater.