In November, the Tampa Bay Lightning hosted "Girls Play Hockey" day at the St. Pete Times Forum. Tuesday night, it was the more mature ladies' turn to explore the home of the Lightning and the game they play.

The team has been hosting "Hockey N Heels" for over ten years now, and it's believed to be a one-of-a-kind program in the NHL.

"The Flyers tried something similar, but it was just women sitting in the bleachers while people from the team talked at them. This is much more interactive and a lot more fun." - Bobby 'The Chief' Taylor

"I already consider myself a pretty proficient fan but I'm excited about the chalk talks and the opportunity to meet some of the players. I'm a season ticket holder but there are parts of the building I've never had a chance to see before." - Alicia Elkins, Bradenton

"I'm a novice. I'm a season ticket holder too, but I often watch the games and when I think they're doing great, people correct me and tell me they're not, and vice-versa. So I'm looking forward to learning about some of the finer points." - Rachel Weibel, New Port Richey

The program, specially designed for women to create and develop a better understanding of the game, started at Between The Pipes, the pipe organ deck on the south end of the Terrace level. There, the women were greeted by Lightning television color commentator Bobby "The Chief" Taylor and Vice President of Event Production & Entertainment John Franzone. "I'm the guy responsible for all the stuff that interrupts the game", Franzone said by way of introduction. Organist Ray Horsley played the organ and answered questions about the instrument, his history playing it and the history of the organ's association with hockey.

From there, the women were split into groups and taken on tours of the Forum. Stops included a visit with video coach Nigel Kirwan, some coaching pointers from former Lightning center Brian Bradley, a question and answer session with former NHL referee Don Koharski, a tour of the Lightning's locker room and workout facilities and on-ice instruction from Lightning players Matt Gilroy, Dominic Moore and Teddy Purcell. The evening concluded with food and drinks on the new, outdoor party deck.

"As people who are around the game so much, it's easy for us to forget that not everybody understands every detail of what goes on. So it's good for us to slow down now and then and share what we know, and it's good for the game." - Taylor 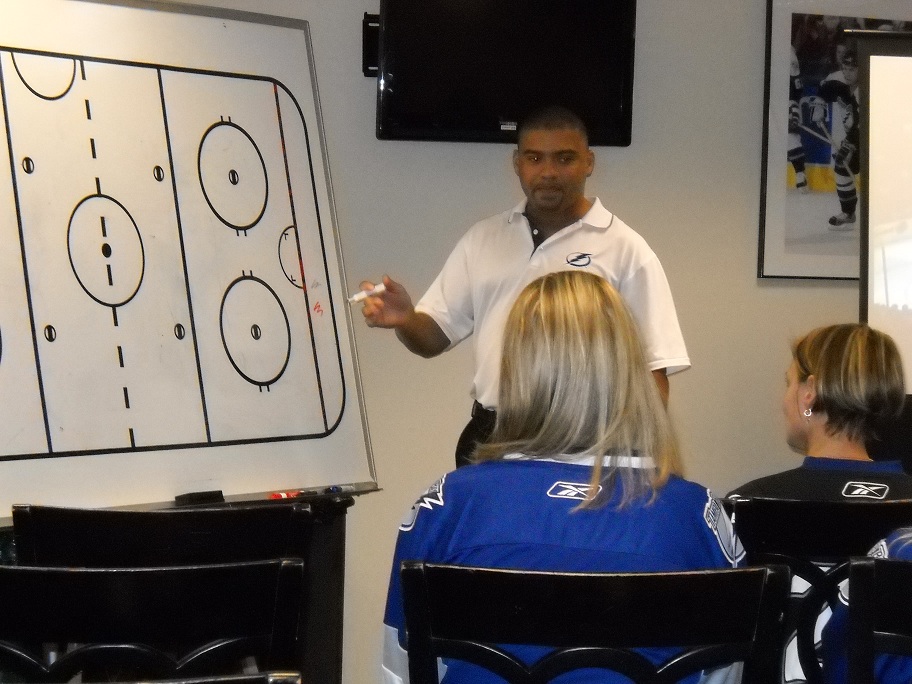 Lightning video coach Nigel Kirwan diagrams the "1-3-1", while using video clips from the game against Philadelphia on November 9th.