Question of the week: What do you think about the Tampa Bay Lightning and the 2012 NHL realignment?

Share All sharing options for: Question of the week: What do you think about the Tampa Bay Lightning and the 2012 NHL realignment? 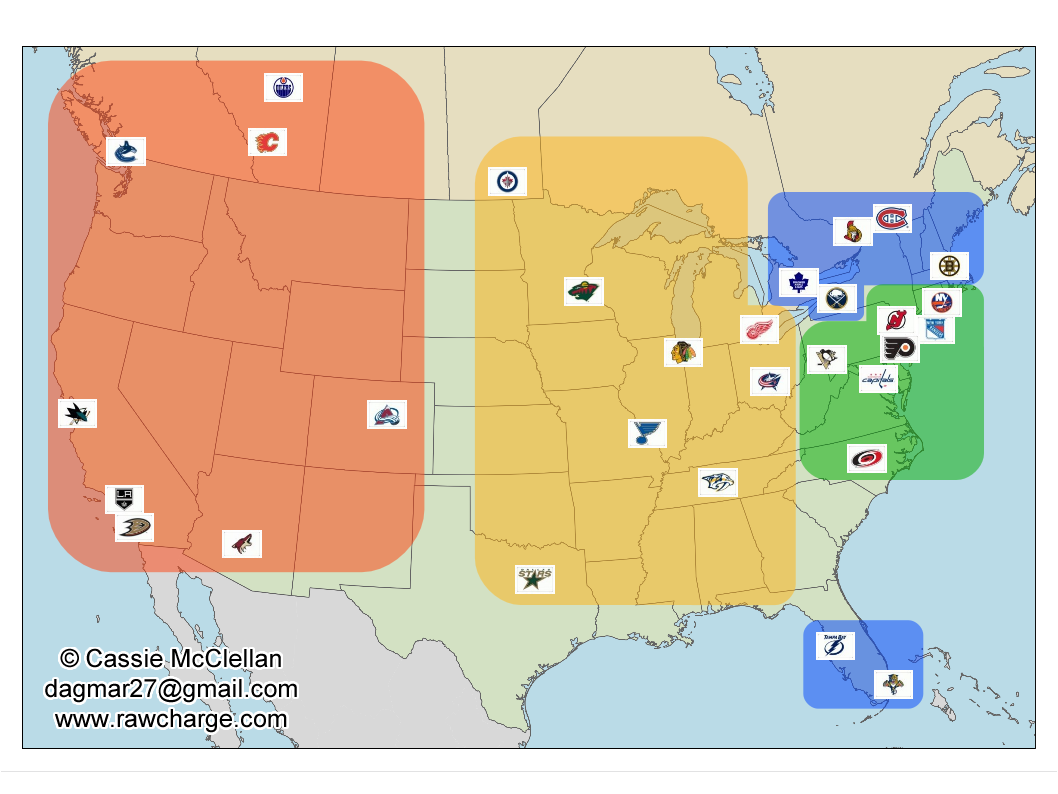 Isn't that a spectacular map? Even if I do say so myself? Actually, I can see all kids of things that are wrong with it, but we'll let that slide for now.

Last week, one of the biggest buzzes around the NHL was realignment. The NHL Board of Governors (BoG) voted in the scenario mapped above, which led to a lot of people asking variations of the question: Why are the two teams in Florida state off all by themselves? Also being asked was why did the Florida teams have to jump a conference to play the teams from the rest of theirs.

There have been mixed reviews about this scenario. Most people residing outside of the state that are not fans of either team seem to feel that it was a ludicrous setup. That Tampa Bay Lightning and Florida Panthers fans were getting shafted by how this worked out for them.

The opinions of Lightning fans, at least, seem to be more mixed. There is an element of feeling disrespected by the league for many. But others are taking a broader view, and choose to believe that this will benefit the Lightning. It will help ticket sales, and give some much needed exposure of the Lightning in Canada.

Me, I'm taking a wait-and-see approach. On the one hand, the fact that the BoG did this to the Florida teams shows that they're not held in high regard, and constant travel across the US-Canada border won't be a good time for either team. But, on the other hand, I think that the Lightning can work this scenario to their advantage and come out ahead financially because of it. However, it will really depend on how the team itself deals with this, and how the schedule turns out next season in terms of how often they'll have to cross the border.

So the question of the week is this: What do you think about where the Tampa Bay Lightning ended up in the new 2012 realignment scheme?

We got screwed. Obviously politics had a huge part in how the conferences were formed and it is what it is. The conference we are in makes no sense geographically since to get to the majority of our conference opponents we will have to fly over another conference to get there.

Could the conferences have been divided better? Yes. Am I really upset by this? No, just mildly annoyed. But come next year, my mild annoyance of the increased travel will just become part of the new schedule and it won't be that big of a deal.

I said this publicly in comments on a recent game thread:

Basically, that's how I see how the chips fell for the Lightning in this re-invention-of-the-wheel realignment plan that the Board Of Governors approved. It protects regional grudge matches in the northeast and, per usual, makes a mockery of geography in one way or another.

In this case, it's Tampa Bay and Florida having to travel over an entire conference to play conference opponents.

I'm still miffed they decided to go so far away from a traditional setup of a two conference scheme. I’ve publicly vented that the East-West alignment was bad. Derek Zona had put together a sane version of a two-conference, East-Central-West alignment. Why did the NHL have to vary from what is basically the standard North American sports alignment (two conferences, and those conferences split into divisions) and go with four conferences?

It'd be one thing if they had decided to mimic European soccer leagues and promote/demote teams depending on where they finish in the standings. That's following a precedent. In this case, it's an experiment. One that screws over the Lightning and the Panthers.

This plan is great for a lot of teams. It protects the big-market rivalries of the northeast and of western Canada. It makes Dallas far more viable in the long-term. It possibly saves Columbus from collapse. Furthermore, they've achieved a certain level of flexibility that allows them to deal with the Phoenix situation however it develops. There are ways that it's good for the league as a whole.

But the Florida teams bear the brunt of it. The Lightning will lose 4 home games from the closest two teams (Washington and Carolina) and 5 home games from other northern teams (New Jersey, the Islanders, the Rangers, Philly, and Pittsburgh), two of which were becoming meaningful beyond the standings (Philadelphia and Pittsburgh). In place of this they gain 5 home games with Boston, Buffalo, Montreal, Ottawa, and Toronto. The two Florida teams will have to take long road trips to play conference games; the northern teams in the same conference will not. That's unfair.

The level of misunderstanding out there about this plan amazes me, though. People seem to think (a) that folks who have moved to Florida from somewhere else will buy more tickets to the home games than they do now (huh?); (b) that visitors will actually fly to Florida for a random weekend in the middle of the season to go to a game (in a bad economy) more frequently than they would have done it before; and (c) that the New York area teams are in the same conference as the Florida teams. I get the first two. That's what the media has been telling them. But that last one is just pure laziness.

I know I'm in the minority here, but I don't hate the realignment plan.

We all knew some form of realignment was coming and we had to know that it wasn't going go make everybody happy. I fully acknowledge that the teams in Florida got the least favorable draw but A) did anybody really expect that we'd be accomodated at the expense of older, bigger markets? and B) I don't think it's all that bad. Yes, travel will be increased but it doesn't have to be the nightmare scenarios that everyone is picturing. The issue with going in and out of Canada is the time it takes to pass through customs. All the league has to do is schedule the Lightning's games against Montreal, Ottawa and Toronto together so they can knock out visits to all three cities with one pass over the border and one pass back. And it will help if the league minimizes the back-to-back games or at least schedules them so they make sense (Buffalo-Toronto, for example). The big problem with travel is when a team arrives at their hotel at 3 or 4 am prior to a 7 pm game. The increased travel the Lightning will have won't necessarily produce more of those scenarios. It takes about an hour and half longer to fly from Tampa to Montreal than from Tampa to Durham. Anybody who's ever traveled will tell you the difference between a two hour flight and a three hour flight is negligible. Lightning owner Jeff Vinik has asked for factors like that to be taken into account when the schedule is made and the NHL says they will take those concerns into consideration. I know there are conspiracy theorists out there who think the league has an agenda against Tampa Bay and Florida and will end up screwing them over just for the sake of doing it, but I just don't see any logic to support that.

And at the end of the day, I think true rivalries are going to be created and/or strengthened, which will make the playoffs even better, which is good for the league. Plus, who's to say that when the Phoenix situation gets straightened out, we don't get shuffled again and end up with a more favorable draw then?

At first glance, I looked at the realignment and thought the Lightning were getting pooped on. As usual.

No stoking of the developing rivalries with the Pittsburgh Penguins and Washington Capitals. Fewer chances to watch the Philadelphia Flyers playing footsie with their own faceoff dot. No more brutally unfunny weather puns in game headlines when the Bolts play the Carolina Hurricanes. This sucks.

But then, as I was cooking up this post, my tune began to change.

What group of people has discounted, discredited, and outright questioned the existence of "sunbelt hockey" more than Canadian hockey fans? And what subgroup leads the charge? Fans of the Toronto Maple Leafs and the Montreal Canadiens. That's when I realized that, in this new format, if the Florida Panthers and Boston Bruins maintain their current trends, the Lightning can get their shit act together, and the Buffalo Sabres continue to add pieces - all things that are not in any way out of the realm of possibility - then Canada could be watching three Canadian teams sitting at home in April. All at the hands of "sunbelt hockey."

Can you imagine? Riots break out in Canada when Canadian franchises lose to "traditional" storied franchises like the Bruins and Flyers. If the Panthers and Lightning hold three Canadian teams out of the playoffs, Canada may for all we know just secede from the whole damn planet.

If you missed it, check out last week's question, What is your favorite hockey tradition?