Hey everyone, my name is Corey Sznajder and I run the Carolina Hurricanes blog Shutdown Line. One of the main things I do there is look at the statistical side of the game and one of the newest tools going around the blogosphere are "OZ-QoC Charts" or "OZ Coke" for short. What this does is provide an easy-to-use graph that shows how coaches are using a player and how they are performing in that role.

The method is pretty simple, but a little difficult to explain so bare with me here. To show this we plot a player's offensive zone start percentage (x-axis), which is the percentage of shifts he has started in the offensive zone, against his corsi relative to quality of competition (y-axis) to show how tough his assignments are. Players who are taking on the toughest assignments will likely be found in the upper left hand part of the graph because they are taking most of their draws in the defensive zone and are facing tough competition. Those who get easier assignments will be found in the lower right hand section of the graph because they start more of their draws in the offensive zone against weak competition.

I do this weekly for my Hurricanes report card and made graphs for the rest of the Southeast division since I think this kind of stuff should be spread around the league. This isn't the easiest to explain but it makes sense when it's put into action. Check out Robert Vollman's post at Hockey Prospectus for more information.

Without further ado, let's see how Guy Boucher's been deploying his forwards and defensemen this year. 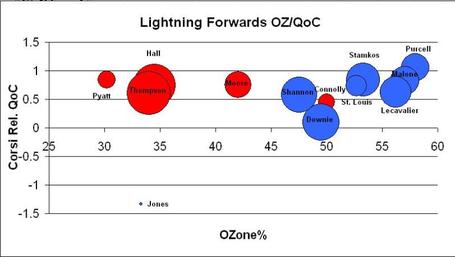 Hint: Enlarging that picture will help a lot.

We've got an interesting division going on here as Boucher knows who his more defensive forwards are and he's been using them to help his top-six. Dominic Moore, Tom Pyatt, Nate Thompson and Adam Hall are the guys getting these tough assignments but they haven't been playing nearly as well as they did last season, especially Moore. This is where losing Sean Bergenheim hurts a lot because he is one of the league's better defensive forwards and is capable of creating offense no matter where he starts his shifts. That's not to say that he is irreplaceable because there are plenty of tough-minute forwards in the league but it appears that Pyatt and Ryan Shannon haven't been ideal replacements. Shannon has played well, though but he was a sheltered forward in Ottawa and might need some time before he replaces Bergenheim.

The team's top-six forwards are getting sent out against tough competition but are seeing some more favorable zone starts compared to the previous group. The good news is that most of them are beating out their competition and making the most of their cushier zone starts. Teddy Purcell, Vinny Lecavalier and Ryan Malone are getting about the same level of assignments and performing at around the same level. Lecavalier appears to be playing the best out of those three. He has the highest shot, corsi, goal and point total out of all of them.

Steven Stamkos isn't being completely sheltered but he's started more of his draws in the offensive zone, which is how it should be with a scorer like him. He is also outperforming the rest of the forward corps territorially and that shouldn't surprise anyone.

Steve Downie and Brett Connolly are the only guys who are getting the benefit of sheltered minutes with regards to quality of competition and Connolly is the only one in this role who isn't driving possession well. Maybe the team should look into putting him in Purcell or Malone's role? That could help him a little bit. Downie appears to be doing fine with easier minutes even though I thought he would be used in a tougher role at the beginning of the year.

Eric Brewer and Victor Hedman are doing the bulk of heavy-lifting on defense. In fact, Brewer was near the top-10 in defensive zone starts for defensemen the last time I checked, which is pretty unbelievable. Hedman appears to be outperforming Brewer a bit on Tampa's shutdown pair and he's having an outstanding year defensively when you think about it. A guy who is getting that many draws in his own zone and beating out his competition really speaks a lot about his performance. I do think that their assignments will get slightly easier when Mattias Ohlund returns.

As we move towards the right on the graph, we'll see Brett Clark and Pavel Kubina who are getting outplayed at even strength despite the easier assignments. Clark is still getting buried in his own zone quite a bit and his corsi rel. is the lowest among TB defensemen. Getting Ohlund back should help him too. There is also Matt Gilroy, who is being sheltered with easier assignments but not territorially which is interesting and different from how the Rangers used him. I would have expected him to be near Marc-Andre Bergeron on the far right but I guess Boucher trusts Gilroy slightly more.

Speaking of MAB, he's been getting a truckload of offensive zone starts and that's what you have to do with a defenseman like him. There's a reason why he's close to leading the league in points for defensemen. He needs offensive zone starts to be effective and he's been perfectly fine in his role for Tampa Bay. Not too bad for $1 mil. either. Bruno Gervias is also starting most of his shifts in the opponent's end and he has been creating offense despite the low point total and limited playing time.

There you have it. If you have any questions I will be happy to answer them. This whole thing is still a work in progress and bloggers have created their own versions of them so if you have any suggestions, I'm all ears.