The reasoning for changes were understandable: new ownership, new management, new direction for the club, a new standard of excellence and a desire to link the franchise to the great teams of the past and the famed "Original Six" teams of the league. Cashed out were the black and silver colors that had been with the club since it's inception; also out was the lightning graphic that had been plastered to the outsides of the hockey pants; the victory stripes under the jersey arms as well. The club has gone "All In" with their changes.

Yet, many Tampa Bay Lightning faithful have been left to wonder about this. Long time fans, new-to-the-fold fans, season ticket holders... Even non-fans have voiced an opinion regarding the Lightning's new duds.

Raw Charge ran an impromptu (and admittedly unscientific) survey from Wednesday, February 2nd, until Wednesday, February 9th, in order to gauge NHL fans opinions on the Bolts new uniforms. While the sample size (335 total responses to the survey) was less than we had hoped for, the results gave us an idea about how you - the fans - felt about various aspects of the changes.

Of the 335 respondents to the survey, 34% approved of the new Bolts uniform design, while 46% disapproved, and 20% were undecided. The results for self-described Tampa Bay Lightning fans are: 28% approve, 50% disapprove and 22% are undecided.

More survey results and thoughts from the fan base (Tampa Bay and the general NHL) below the fold.

There were a lot of answers and comments to sort through with the results. So, we won't be including a breakdown of results of every aspect from the survey. But we'll try to touch on some of the key results and comments that stand out.

Also, I would like to remind that we did not ask any private data (gender, age, income). If we had, we probably could further break down the likes / dislikes of every aspect of changes. But that's not what we were out to do when we started.

As we posted above, the general majority of Lightning fans who responded to our survey dislike the changes that were implemented by the club. We divided those fans up according to number of games attended: Season Ticket Holders, non-season ticket holders (who regularly, often, or rarely attend games in person) and those who don't attend games / are out of market. The below table gives the results by these three groups:

Those who are more casual in their attendance habits with the club are much more polarized than those who either cannot attend games or those who are season ticket holders. I can't say there isn't a middle ground with them, as 19% of the group is still undecided, but their opinions of for-and-against are four points higher (two points for, and two points against) regarding the brand change. Simply put, more minds are made up compared to non-attendees and season ticket holders.

What about the rest of the NHL? The sentiment seems to be a lot warmer to the overall design, but some of the comments left by respondents touched on the exact same issues that Tampa Bay Lightning fans themselves were concerned about and disappointed by in the new design (with repeat reference to the resemblance between the Maple Leafs, and Detroit Red Wings).

"I see that they were going for a timeless look, and I love simple, but I think they went a little too far. It wouldn't hurt to throw one more colors in and make the logo a little more detailed. Lastly, I thought the victory stripes were one of the few things they had that really were timeless and it is really upsetting that they're gone."

Note, this was coming from someone who rated the changes with approval.

Repeatedly stated in comments regarding the changes to the brand, were remarks about team identity and the identifying characteristics of the Tampa Bay Lightning uniform. There were a few who remarked that black was a fad-color that everyone is now using on their sweaters.

But a majority of the polled respondents saw elimination of two of the Bolts traditional team colors - used since the team's founding -- in a negative light: 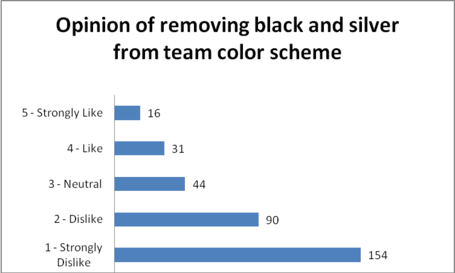 244 responded with a "Dislike" or "Strong Dislike" to losing black and silver from the team brand, while 47 respondents had a favorable opinion of the change, and 44 were neutral on the change.

A season ticket holder (who posted elaborate remarks on their displeasure with the overall changes) summarized their disappointment in the color palette of the team:

"... The Lightning are Black Silver Blue and White. That's who we are and as far as I'm concerned that's who we always will be. I have tried very hard to look at the new uniforms and logo in different perspectives but I can't bring myself to settle and be ok with it."

Another fan, describing themselves as attending games "Often" remarked:

"I think a little change could go a long way. A little additional color (black and silver!) could really add some pop, and make the logo much more tolerable. I definitely prefer the current "Bolts" (3rd jersey) over the new one. Sorry, but add me to the fans who think this new look is just a little too close to the Toronto Maple Leafs. No need to restrain the palette to just 2 colors. The minimalist color schemed combined with the really sparse logo is just too watered down - it sucks the life out of the brand. I appreciate the efforts, but I think they missed the mark."

Some remarked how the new logo would see an improvement by adding "depth" through accent colors to the new logo, or simply outlining it with black (or silver). There's been a popular mock-up design (that originated on Hockey's Future) that's made the rounds, working in black bands into the overall uniform scheme and seems to make a visual difference as well.

Two other aspects of the Lightning's identity on the ice are the lightning bolt running down the hockey pants and famed "victory stripes" that appear on the armpits of the team uniforms. 221 of 335 - 66% of respondents - had a negative opinion of losing the lightning bolt from the hockey pants (including a super-majority of 43 of 48 season ticket holders), and 54% disliked or greatly disliked the removal of the victory stripes

Stripping away unique and defining characteristics of the uniform that have been part of the Lightning franchise - a "removal of identity" - was brought up a number of times in comments, by both self-described Lightning fans as well as non-Bolts fans.

From an out-of-market Lightning fan:

"The uniforms attempt to be traditional whilst destroying the little bit of tradition that the team already has established. The original colour scheme of blue black and white with silver trim was a stand alone set that established a definite identity for the tampa bay lightning (sic). The new set of jerseys loses this originality and over simplifies the teams look which I feel will be lost in the landscape of the league.

"The Tampa Bay Lightning are a (sic) 20 years old, not 80. They should be building on the identity and history they have instead of trying to derive things from nothing."

And from an Eastern Conference fan:

"...While many teams scrambled to add a black alternate jersey through the 1990's, Tampa and Ottawa were both created with such. To eliminate the teams primary colour from the identity entirely is a huge mistake. The same holds true for the Victory Stripes, which to this point have been synonomous (sic) with the Lightning."

The new primary logo for the Lightning franchise, which has been plastered all over the St. Pete Times Forum since its introduction, is another flashpoint of the brand change. The results of our survey show that fans opinions are pretty spread. While there is a clear majority in the negative sentiment toward the new logo, there's more acceptance of this as compared to the removal of traditional Lightning uniform aspects we mentioned above.

While the negative sentiment is still prevalent (47.5%), the likes and neutrality sentiment give the impression that the logo design will grow on people with time. As we noted above, there was a prevailing sentiment in comments that accent colors would greatly help.

This comment comes from an Eastern Conference fan who "Strongly liked" the new logo design:

"Silver Lining! Atleast something to add a bit of richness. From certain angles it has a very "Beer League" look too it as the logo looks very flat reguardless (sic) of if it is, or not. I think it's just missing a very minor "accent" and you will have one of the nicest jerseys in the NHL."

On the other hand, there is an almost complete and universal admiration for the Bolts shoulder patch logo. A scant 10% of total respondents had a negative view of the secondary logo, with 74% either liking or strongly liking the shoulder patch emblem.

One thing we didn't ask in our survey was to what degree and use should the Lightning implement the crest? Some have suggested - both in comments on our survey and publicly on their own accord -the secondary logo could well be the primary logo, either on the standard jersey or on the 3rd jerseys in place of "Bolts" across the chest.

Others are quick to point out that the emblem reflects what several other teams are using around the league right now. The Minnesota Wild, Pittsburgh Penguins, Florida Panthers, and St. Louis Blues all feature jerseys with a similar round shield design as the primary jersey logo.

I can remember a lot of strong opinions against the Tampa Bay Lightning's 2007 revamped logo and jerseys, unveiled in the Western Plaza at the St. Pete Times Forum.

I have still encountered strong opinions against the logo as well as the jerseys... You wouldn't be able to tell there was a strong negative reaction from our survey results, as the majority (86%) said they either liked the changes immediately or had no strong opinion either way.

One could see that same reaction, in time, with the new Tampa Bay Lightning brand design. And respondents were pretty much in agreement on the sentiment that with time, their opinions very well may change.

The process leading up to the new brand unveiling - reported as a six-month turn-around from first contact of SME Branding to the public presentation of the new uniform - does feel like fans weren't really consulted while the changes were in development. There are marks and other distinctions of this team uniform: distinguishing characteristics of just what the Tampa Bay Lightning have been, and what we as fans are proud of.

To state it bluntly, the changes come out as contradictory of management's previously stated desires to build on and acknowledge traditions among the fan base, and to embrace team history and heritage.

This is not saying anything negative toward GM Steve Yzerman, CEO Tod Leiweke, or owner Jeffrey Vinik, who have all proven excellence is what they desire and where they want the club to go. The opinions here are simply sharing dissatisfaction of the unveiled symbolic representation of the franchise that many of us have lived and died with, emotionally, for nearly two decades.

No one has said, nor should they say, anything to undermine Mr. Vinik, or Mr. Leiweke, or Mr. Yzerman over this. It's a respectful dissatisfaction that's being voiced. For a franchise that is driving for excellence, the brand change is a bit of a letdown instead of further ascension toward the paramount of world class organizations.

What this re-branding amounts to, as shown by this survey, is the complete elimination of the few traditional elements the Tampa Bay Lightning have in the eyes of the fans, and attempts to co-opt the essence of the more established franchises while turning away from its own identity.

A general summary of all results can be found here.