Share All sharing options for: Tuesdays with Dani: Boucher on last night, Stamkos' contract not close and Bob Probert's brain

"I've looked at it about 15 times now with about 20 people in my office," Tampa Bay coach Guy Boucher said. "Our guy never touched the goalie. It was their player's stick, and it's not a goal, then it has to be a penalty. It was a major tripping. That's a goal and that's 2-0, and that's probably the game." - TSN

But even with the disappointing loss, the Lightning don't have time to dwell on it since they play another difficult team tomorrow night in the Chicago Blackhawks.

After the jump your weekly links from around the interwebs...

Links from around the NHL:

And fail of the week goes to TBO.com for confusing the Vancouver Canucks with the Montreal Canadiens. Apparently all Canadian teams are the same these days 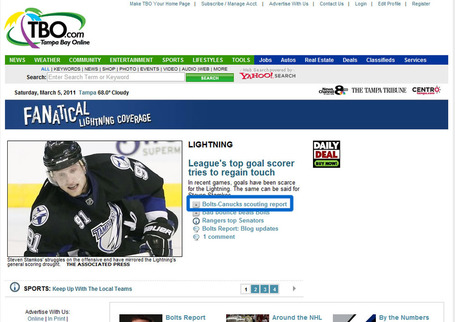