What not to wear, and how it doesn't apply to you

Share All sharing options for: What not to wear, and how it doesn't apply to you

Apparently, it's out there, however.

It was brought up in News and Notes in the St. Pete Times, and Dwayne Roloson had to defend the entire situation:

"To me, friendship goes beyond team boundaries," Roloson said. "I've known Justin for a lot longer than I've been here, and my ties to Minnesota are a lot."

But for any Tampa Bay Rays fans who feel aggrieved or slighted by players from the Tampa Bay Lightning dawning the logo / attire of an opponent, and feel like there's a need for solidarity in the Tampa Bay sports community, and the Bolts somehow defiled that notion and committed a cardinal sin: 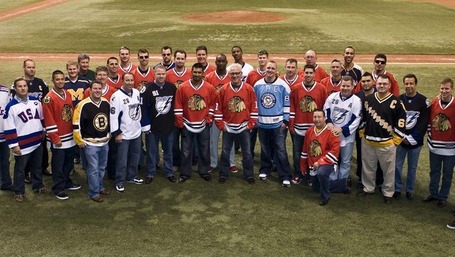 Hello, Pot?  This is the kettle.  You're black.

And if you don't bother to recall all the brouhaha over this picture last May, let me remind you how it came to be:  It was through a Rays staff member who had ties to the Chicago Blackhawks.  A connection.  Much like Dwayne Roloson has a connection to Minnesota.

And the 'Hawks were, at the time, playing the Philadelphia Flyers in the 2010 Stanley Cup Finals.  Philadelphia.  The Rays and Philadelphia Phillies played against each other in the 2008 World Series.  Philly hate justified it all...

But I digress. I think the Times summarized things perfectly in introducing the "issue" as "from the Get A Life Department."  It's not worth dwelling on.  It's stupid.