Share All sharing options for: Lightning return to Tampa, welcomed as heroes

The Tampa Bay Lightning's season ended Friday night with a 1-0 loss to the Boston Bruins in Game 7 of the Eastern Conference Finals Friday night. But you woudn't have known that was the outcome if you'd been at Tampa International Airport this afternoon when the team's flight arrived.

Several hundred fans, decked out in Lightning blue, clucthing signs and chanting "Thank you Lightning" were on hand to greet the team as conquering heroes. In a show of mutual appreciation, players got out of their cars and walked along the exit route, shaking hands and posing for pictures along the way. Head coach Guy Boucher took particular care to make absolutely sure that each fan knew that their commitment was appreciated:

"As if Guy Boucher wasn't cool enough, he just stayed & took pics/signed autographs w/ EVERY fan here! In a suit! In the HEAT!" -- Kelly Hickman "TheTampaGirl" via Twitter 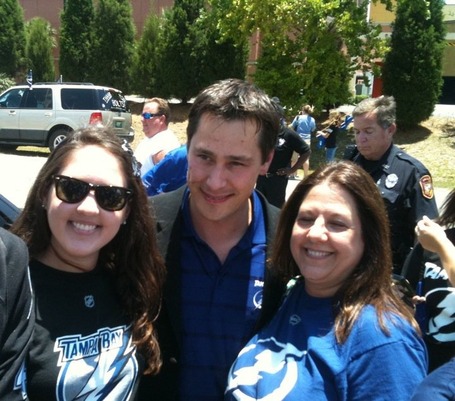 Head coach Guy Boucher poses with two of the many fans who came out to say thanks for a great season. 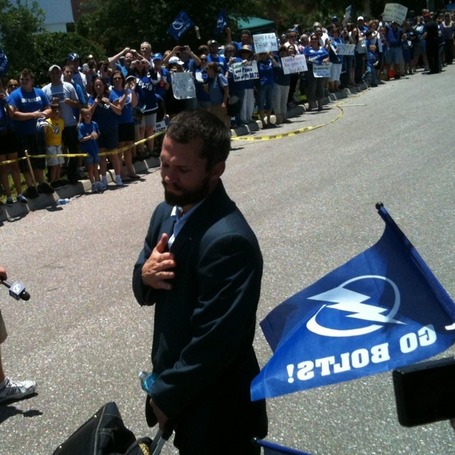 Lightning winger Martin St. Louis shows the fans where his appreciation (and most of his game) comes from.

(All photos in this story courtesy of Kelly Hickman)