Share All sharing options for: Graphical goodies from Behindthenet.ca

There's nothing like an unexpected present to make a girl happy. Although I have to admit that I'm pretty weirded out by how excited I am to get a statistics present. I have no idea at what point this number thing became less of a chore and more of an obsession.

I had been doing some research on other things when I got distracted by the Lightning's shot data. I spent quite a bit of time trying to see what sort of trends I could find in the data from last season and this one, and then over Christmas, Behindthenet.ca came out with some fascinating new graph features that essentially made the hours and hours I put into this project redundant. ... Yay.

In all honesty, it really is a "Yay!" sort of thing, especially for folks like me who aren't quite sure what to do with all these numbers that are floating around. What these new graphs help to show are (a) puck possession over the course of a season and (b) sustainability. [Note that all of this data is cumulative and not game by game. It's also 5v5 data. No power plays or penalty kills.] They've got graphs for every season back to 2007-08. 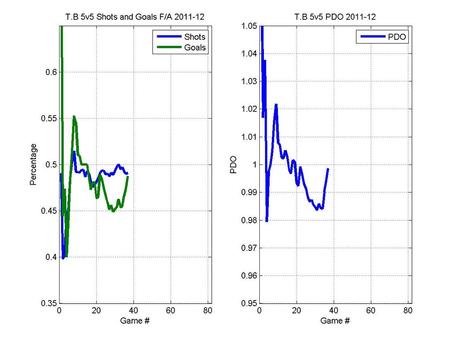 On the left, you have the team's shot ratio in blue (this includes missed shots but not blocked shots) and goal ratio in green. Both are expressed in percentages of total shots or goals in the games. The idea is that teams that possess the puck better will win more games. Since it's logistically impossible to determine who technically "has" the puck in a hockey game and for how long, shot data stands in as a metric for puck possession. Possession leads to shooting, shooting leads to scoring, and scoring leads to winning, theoretically.

Ideally the blue line in that graph will be above 50% (or .5). [Well, ideally both lines will be up there.] That would mean that the Lightning were taking more shots than their opponents. It certainly was that way all of last season. This season, not so much. It appears to be getting a bit better. But then, in general, over the course of a season shot ratios tend to regress towards the 50% mark, although there's still a lot of variation from team to team.

Essentially, this chart shows in graphic form what I've been arguing numerically over the past month and a half: The Lightning have a shot problem.

Not only are Shots For down significantly over last season, but Shots Against are up significantly. You can see how those two things are related. The Bolts simply haven't had the same control over the puck as they did in 2010-11 and unless that gets corrected, there will continue to be a Goals Against problem. [This doesn't address the power play issues in any way, but there is no doubt that power play success helped the Lightning out in 2010-11.]

The graph on the right is PDO, which as I've mentioned in an earlier post, is a measure of sustainability. Over the season, that line will get closer and closer to 1. When it's below it will go up; when it's above it will go down. From what I've seen of the last few years' data, anything between .99 and 1.01 is pretty sustainable. The Bolts ended last season at .991, by the way.

For most of this season, the Lightning's PDO has been not only below 1.000, but it was declining between late November and late December (after game 19: Nov. 19 vs. the New Jersey Devils). That decline has been a result largely of a sinking shooting percentage (as represented by that big gap between the blue shot line and the green goal line in the middle of graph 1). Over that period, team shooting percentage dropped from around 9.5% to about 8.4%. It has come back up to 9.4% over the past three games.

Both shooting percentage and save percentage vary wildly from game to game. They both need to be taken as trends rather than individually or even over a short series of games. Cumulative SV% has been hovering between .897 and .907 since game 11 (Oct 29 vs Winnipeg.) That's not unheard of, and although it's lower than fans might want it to be, it's higher than it was until about game 60 of last season. The goalies have turned in ESSV% above .920 in 6 of the last 10 games, and it needs to stay that way to give the team the chance to win games.

As of right now, the Lightning are sitting very close to 1 in PDO, which means that "luck" (really, randomness) isn't affecting their play all that much at the moment. They aren't getting any particularly good or bad bounces that would explain their scoring or save rates. That doesn't mean that the team will necessarily continue to win games. It simply means that they aren't being especially hindered or helped by elements outside of their control.

Anyone who wants to check out these lovely charts can do so at behindthenet.ca/T.B_2011.html. On that page you can find the graphs, as well as the data behind them in a table at the bottom. If you do go look, remember that the data is cumulative and not game-by-game, that the TOI is measured in seconds (while all /60 stats are in hours), and that there are drop-down boxes at the top of the page that give you a quick way to move from season to season or team to team.