The Tampa Bay Lightning defeated the Columbus Blue Jackets 4-2 Tuesday night at the Tampa Bay Times Forum, their fourth win in a row.

In a season that has been marked by a search for consistency, one thing you've been able to count on fairly regularly is for the Lightning to play up or down to the level of whatever opponent they're facing. Good, solid efforts against league powerhouses have frequently been offset by dismal, sloppy outings against non-contenders. So coming off a three game stretch featuring wins over the defending world champions and two teams jostling for playoff spots in the Western Conference, how would the Bolts fare against the team with the worst record in the league in the last game before the extended All-Star break?

Not great maybe, but certainly not too bad.

"I don't think we'd like to have the break right now in terms of how we're rolling in games, but if you're going to get a break, you want to finish on a winning note." - Martin St. Louis


In a solid-if-not-spectacular win, the Lightning did what it had to do to fend off the Blue Jackets who came into tonight's game with an NHL-worst record of 13-29-6. The Lightning got on the board first when Mike Angelidis, making his NHL debut after being called up from Norfolk, made a steal at the blue line, skated in and put it past Columbus goaltender Curtis Sanford unassisted at 13:20 to get things started.

"Unbelievable. During the celebration, I thought I was going to faint. It's a dream come true." - Mike Angelidis

"The guys that are working in the American League are doing a good job and the guys themselves are figuring out what they need to do when they come up here. It's a must if we want our organization to win in the future. It's a really good sign, a major building block." - Lightning head coach Guy Boucher

The Blue Jackets countered less than two minutes later on a goal from Brett Lebda, his first of the season, on assists from Derick Brassard and R.J. Umberger.

The period ended with the teams tied at one.

The Lightning re-took the lead at 8:19 of the second on the power play. Vincent Lecavalier ever-so-slightly deflected a shot from Bruno Gervais that fluttered past Sanford's outstretched glove. Martin St. Louis had the secondary assist (photo by MTBoltFan). 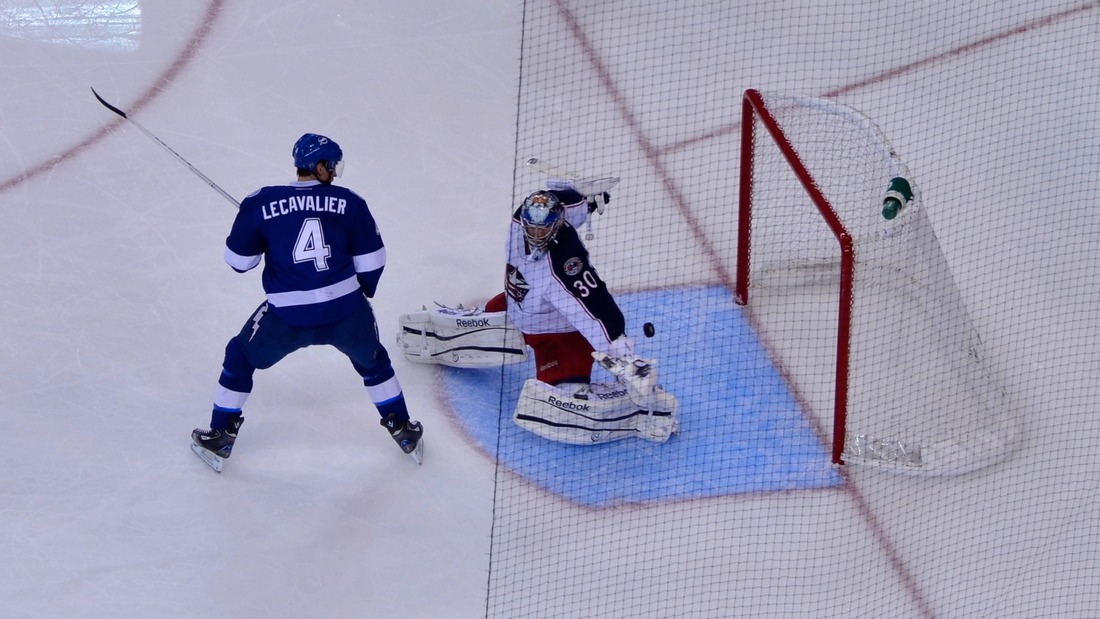 At 16:56, St. Louis doubled the lead to two when he scored on an assist from Lecavalier.

The Lightning carried the 3-1 advantage into the second intermission.

At 5:40, Columbus pulled to within one when Ryan Johansen, with help from Umberger, beat Lightning goalie Mathieu Garon. On the night, Garon stopped 22 of 24 shots that came his way, while Sanford stopped 27 of the 31 he faced for Columbus.

Nate Thompson gave the Bolts some insurance at 11:29 when he somehow found the tiniest of five-holes with assists from Dominic Moore and Trevor Smith.

The Lightning head into the All-Star break with a record of 21-23-4, riding a season-long winning streak of four games, in 11th place in the Eastern Conference and currently nine points out of the playoff picture.

"During the last four games, we never talked about the standings. We never started talking about the anxiety of making or not making the playoffs. We stayed away from that and that's why we got those four games. We isolated every game and tried to make them the masterpiece of the day, period. And the rest, we'll keep on grinding. You know, going up a hill and you see how steep it is, it aint encouraging. It's rock by rock, it's two feet, three feet at a time. and eventually when you've done a lot of those three, five, six and ten feet, eventually you realize how high you are. And I think right now, we're just fighting to get our game to the level we think we can get." - Boucher

The Lightning's next game is next Tuesday, January 31st, against the Washington Capitals at the Tampa Bay Times Forum.