In the original post in what has become a series, I covered the 2009-2010 and 2010-2011 seasons of the Lightning and the Power Play Opportunities (PPOP) for them and for their opponents. The goal then was to prove or disprove the common complaint of Bolts Nation: the referees are biased against the Lightning and give more PPOP to their opponents than to Tampa's Team. In that post, I made the point (backed by historical statistics from the NHL's online repository) there was no bias of the referees--and if there is a bias, it's in favor of the Lightning.

That was then, this is now.

First, to re-orient you to the terms and statistics I used in this edition of the DTHU. First and foremost, the aforementioned PPOP. For PPOP, only time in which one team is at least one man down (or up) counts as PPOP. To make the point more clearly, there is a notable difference between PPOP and the number of times a team is penalized. The difference is matching penalties (either of the minor or major variety) and misconduct penalties (because they do not cause a Power Play in and of themselves).

Also worth noting is the difference in tallying a double-minor penalty. The NHL scores a double-minor penalty as two PPOP, but only one penalty against the offending team. An example of this is the Lightning's game versus the San Jose Sharks earlier this year. In the 3rd period, Michal Handzus received a double-minor for high-sticking--giving the Lightning two PPOP and giving the Sharks one penalty tally. Additionally, PPOP is counted for even the smallest amount of man advantage (i.e. 3 second 5-on-4 advantage counts as a PPOP).

With the introduction out of the way, let's look at the league-wide penalties this year. This year at this point, the Lightning are the 12th most penalized team in the league, racking up 188 penalties through the end of December. Leating the league is Philadelphia (226), and the team Lady Byng leader are the Sharks (142 penalties). The league average is just under 180 (179.43). With that in mind, the Lightning have played 17 of the 18 teams with fewer penalties called against them than the Lightning, and most of them (13 of 14 teams) have fewer penalties tallied against them than the league average. On the other side of the same coin, the Lightning have played 6 of the 11 more heavily penalized teams thus far this year (the 5 missing at the opening of January are Vancouver, Dallas, Anaheim, Edmonton, and the Kings). Keep these numbers in mind later; I believe they partially explain the lower PPOP numbers for the Bolts this year compared to years previous.

Comparing home and road penalties and PPOP, the numbers are about even:

As we look at the Lightning and their PPOP, what a difference a year makes. Remember that last year, the Bolts ended the year with 30 more PPOP than their opposition, and was the 13th least penalized team in the league. This year paints a different picture. At the end of December, the Lightning trail their collective opponents by 22 PPOP (0.595 PPOP/Gm). Significant already in this season are a couple of games.

In the games at home against the Panthers on 17th October and 26th November, the Lightning gave the Panthers 6 and 4, respectively, more PPOP than they had, dropping their PPOP Differential significantly each time: 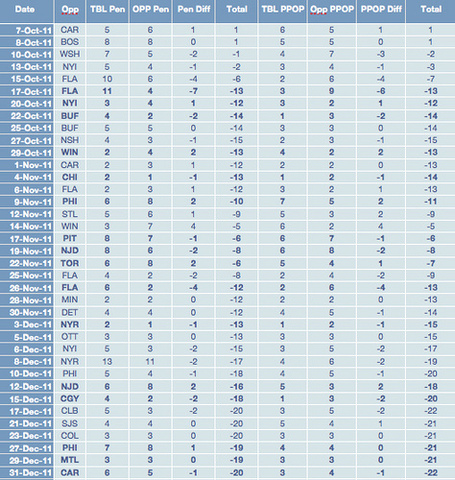 Games in bold text are home games, and again negative numbers in the "Differential" and "Total" columns are in the opposition's favor, positive numbers are in the Lightning's favor.

Now, please recall the mention at the top of this article the total penalties taken by each team in the league. Because the Lightning have been playing the bulk of their games against teams with fewer penalties against them (only 10 of their 37 games have been against teams more heavily penalized than the Lightning), I believe the penalties against the Lightning are normal. As the Bolts continue their schedule it will be interesting to see if that hypothesis holds true. If it does, it could mean a lot more PPOP for the Lightning in the second half of the season. Indeed, when a trendline is added to the graphical representation of the PPOP for the Lightning, it is trending up, after beginning the year at over a point below 0:

Please note the red line on the graph (Total PPOP Differential) is not shown after 14th October because it drops off the graph due to the scale--that was intentional, as I wanted to show the slight upward slope of the PPOP Differential linear trendline. 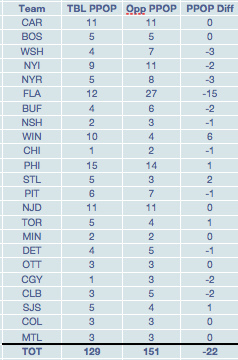 In summary, this season is tremendously different than last year--a fact that should not be a surprise to any of the residents of Bolts Nation. What began as a light-hearted study to show Bolts Nation they don't have to fear the referees is finishing to be a study of taking bad penalties this year that were not taken last year, as well as the schedule being front-loaded with the appearance of disciplined teams.

The future versions of this article will be written at the beginning of each new month and at the end of the regular season.