In this, the third installment of "Do They Hate Us?" I’ll update the statistics for the Lightning this season through the end of January. If you’ve not read them before, please take a moment or two (or 10 minutes if your read as slowly as I). You can find the first edition here, and a deeper look (as well as a look at the penalty statistics through the end of December 2011) here. As I started the last edition of "Do They Hate Us?" I will start this edition.

To re-orient you to the terms and statistics I used in this edition of the DTHU. First and foremost, this issue and continuing topic makes generous use of Power Play Opportunity (PPOP) statistics. For PPOP, only time in which one team is at least one man up counts as PPOP. To make the point more clearly, there is a notable difference between PPOP and the number of times a team’s opposition is penalized. The difference between the two is the number of matching penalties (either of the minor or major variety) and misconduct penalties (because they do not cause a Power Play in and of themselves).

Also worth noting is the difference in tallying a double-minor penalty. The NHL scores a double-minor penalty as two PPOP, but only one penalty against the offending team. An example of this is the Lightning's game versus the San Jose Sharks earlier this year. In the 3rd period, Michal Handzus received a double-minor for high-sticking--giving the Lightning two PPOP and giving the Sharks one penalty tally. Additionally, PPOP is counted for even the smallest amount of man advantage (i.e. 3 second 5-on-4 advantage counts as a single PPOP).

As always, numbers below zero (-3, for example) are in the Lightning’s opponents’ favor, whereas positive numbers are in the Bolts’ favor.

First, let’s look at the penalty statistics through the month of December (the table above). Red blocks denote season lows, and green blocks denote season highs in the respective categories. After finishing November with a penalty differential of -20, the Lighting continued their previous pace of taking penalties at a greater rate than their opponents on any given night, reaching season lows in game penalty differential (15th January versus the Penguins) and season penalty differential (21st January versus the Coyotes). Shifting over to the PPOP columns, we can see the PPOP differential consistently in the opponents’ favor (PPOP differential less than 0), the exceptions being the 5th, 12th, 13th, 17th, and 24th of January. The brightest spot so far this season was the game against the Blue Jackets on the 24th of January, where the Bolts had the advantage of +2 in PPOP differential over the team from Columbus. However, that was barely noticeable in the context of the whole season’s PPOP differential, where the Bolts hit their season low twice (-28, on 21st and 31st of January).

So, if we look at the season thus far (in the graph below), we find clearly the Lightning had a bad stretch from mid- to late-October, and second bad stretch that has lasted from Thanksgiving through the current stretch of games. Also included in the graph below is an orange trendline. It has, if ever-so-slightly, a positive slope—meaning brighter days should be ahead—but not much brighter.

Turning our attention to the league-wide penalty statistics, the table below shows each team and where that team ranks in the league from most penalized to least. The column to the extreme right of the table shows the increase in total penalties for each team. On the bottom of the chart, I’ve calculated the league average number of penalties (just under 226.5) and total penalties. On the right hand column, I’ve also calculated the average increase per team in penalties from the end of December (the last DTHU? Article)—just over 47 penalties. Also on the right column are red and green highlighted boxes—denoting the 5 most penalized teams in the month of January (red boxes) and the 5 least penalized teams in the month of January (green boxes). While the Lightning don’t fit into either category, they are the 7th most penalized team in the NHL in the month of January—a fact that will not improve the number of PPOP for the Bolts. 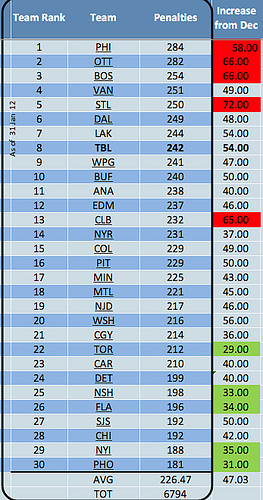 Let’s turn now to how the Lightning’s penalties compare with the team’s opponents thus far this season. The table below shows the opponent, number of games played against that particular opponent, and breaks down penalties and PPOP and the team differential of each of those categories. The last column averages those differences out over the span of all the games played this season between the Bolts and each particular team. On that column, the team with which the Bolts have the worst PPOP differential is highlighted in red (the Panthers) and the team against whom the Lightning enjoy the biggest PPOP advantage is in green (the Jets). In many ways the troubles for the Lightning at the beginning of the year is the story behind the differential with the Panthers. In particular, the home and home series in early October did the Lightning no favors—and those effects statistically are noticeable even this late in the season. 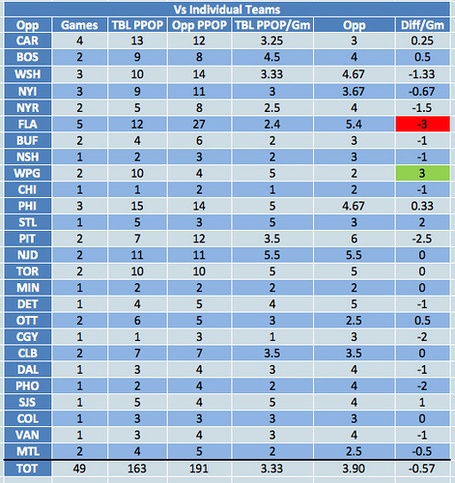 In summary, this season for penalties has in many ways mirrored the play of Our Team—started off on a bad note, improved slightly, and regressed for the last two months of 2011. The second half of the season hasn’t started off particularly well, either—though the team managed to have a 4-game winning streak to end the month. However, that 4-game streak wasn’t matching in PPOP or penalty differential. At this point, the evidence for a penalty or PPOP turnaround is fleeting, but if the Lightning manage to turn around their PPOP and penalty numbers, it could very well signal a turnaround in the team’s overall play.