One kind of year-end review: by the numbers

Share All sharing options for: One kind of year-end review: by the numbers

I'm looking these days at some interesting graphs done by Robert Vollman of HockeyAbstracts.com. [For those of you who don't know, Vollman is a pretty smart guy who thankfully is willing to share not only his insights but his data, which is totally awesome. One more blow against information-inequality.] These graphs have been featured on Backhand Shelf and at On The Forecheck, among other places, and what they tell us is how players were used by their coaches, and what they did with the assignments they got.

This is the kind of data you need to be able to evaluate how a player did in terms of what the coach kept asking him to do. Players who faced very "tough" minutes ought to have different looking final numbers than players asked to play "protected" minutes. [You should be able to tell by my use of scare quotes that those terms, though widely used, don't really mean what you think they mean.] There is a PDF file available for download at Vollman's site that has charts and analysis for every team. 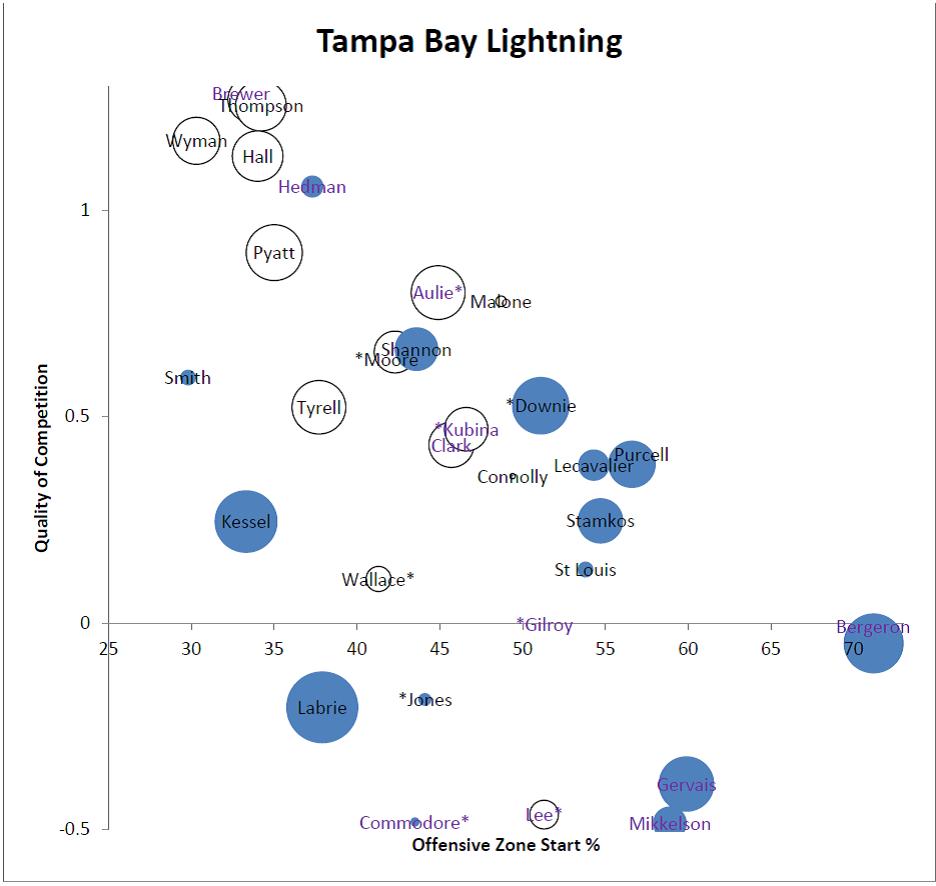 This graph maps out three statistics. Left to right is offensive zone start percentage; top to bottom is quality of competition (CorsiRelQoC, or the relative Corsi of his competition). Each player's bubble is his CorsiRel (his Corsi relative to his teammates). Blue bubbles are positive numbers; clear bubbles are negative numbers; and the size is the distance from 0. (9 would be a big blue bubble; -0.9 would be a small clear bubble). More info about these statistics can be found in my Advanced Stats Primer. [Note: the bubble on the lower left labeled "Kessel" is really Brandon Segal.]

In other words, left to right is how the player was used territorially; top to bottom is who they were matched up against; and the size and color of their bubble is how the shots went either for or against the team while they were on the ice. It's done this way because there are different expectations for different roles. In general, players in the upper left would be expected to have big clear bubbles. Players in the bottom right ought to have big colored bubbles. The middle of the chart would be expected to be mixed.

So, what does the Lightning Player Usage Chart show us? The first thing to notice is that Guy Boucher tended to coach based on territory as opposed to competition. That is, he tended to choose his lines based more on where play was on the ice than by what opposing players were out there. We know this by the way that the territorial measures have a much larger range than the competition measures. Players were facing mixed levels of competition, but stratified levels of zone starts.

Second, Boucher favored specialists over generalists. There are many fewer players in the middle of the chart--players clustered around the team averages--than there are scattered in various corners. The middle of the chart can be seen as a box bounded by 42.5% and about 52% horizontally and 0 and 0.6 vertically. (These numbers include all players with 10 or more games played. Team averages were 45.21% Ozone starts, 0.394 CorsiRelQoC, and 0.373 Corsi Rel.)

There are 13 players below 42.5% in o-zone starts [45-55% is considered average for all players in the league] and 8 above 52%. At the same time, there are 14 players above 0.6 in QoC and 10 players below 0. That leaves 4 players in the "average" zone. Two of those are Pavel Kubina and Steve Downie, who had left the team by late February.

Forwards (names are in black):

This chart makes it very clear right away that the Lightning lacked strong two-way players [upper-right]. These are guys who face up against tough competition but aren't defensive specialists. Tom Pyatt, Ryan Malone and Steve Downie ought to have been further to the right (Pyatt very much so), but were forced into the defensive zone because territorial control was so poor. Essentially Boucher had to choose between his offensive specialists and his defensive specialists with no one in between.

What you end up with are the transition specialists (high zone start to finish ratios) Dana Tyrell and Ryan Shannon, both of whom were hampered by injuries. Shannon, of course, is gone, but you can see that he was doing better with the kind of assignments he was given than anyone else besides Steve Downie was. Shot generation is an important and repeatable skill and that's why I'd like to see Tyrell come back as soon as he's healthy and see this kind of production augmented going into next season. Cory Conacher, Alex Killorn and Tyler Johnson spring to mind, as do a few other Norfolk Admirals.

The lack of productive depth among the forwards almost certainly was critical for the Lightning's season. Lacking an effective lower forward corps for most of the season meant it was harder to set up Martin St. Louis, Vincent Lecavalier, Teddy Purcell, and Steven Stamkos in ways that played to their strengths. That fact alone makes Stamkos's performance this season even more impressive.

It would have also contributed to the high shots against and thus the high goals against. Certainly better goaltending was also needed, but the inability of the team as a whole to get the play out of the defensive zone made it all the more difficult to overcome the failures in net.

As for the new guys, while most didn't do badly, none really shone either, at least in terms of Corsi numbers. Aside from taking faceoffs, J.T. Wyman did essentially the same job as Adam Hall and Nate Thompson and did it about as well. Brett Connolly's "meh" performance after a hot start is reflected in his low CorsiRel for his zone start rate and sort-of-favorable matchups. One wonders whether he'd have been more productive in a more "sheltered" role.

Trevor Smith was being asked to play defensively and still had a positive CorsiRel, though with only 16 games played, that's still subject to sample-size problems. One expects that his numbers would look more like Tim Wallace's with more games played. Neither one set the world on fire, but both were solid. Not on the chart and still with the club are Mike Angelidis, J.T. Brown, and Evan Oberg (D) (fewer than 10 games played).

Defense (names are in purple):

The defensemen were even more specialized than the forwards this season. The extreme corners of the chart are populated by the defense and only Keith Aulie, Brett Clark, and Pavel Kubina placed close to team averages. For Victor Hedman to have a positive CorsiRel while being asked to do what he was asked to do is very, very good. All other defensemen with positive Corsi ratings played under circumstances much more favorable to shot generation.

Eric Brewer was in over his head, however. He got the very worst assignments on the team and it shows in his numbers. They aren't terrible, but he didn't do anything positive with them, either. More "protection," if it's possible, should make him more effective and benefit the team enormously. This season, however, there wasn't anyone else on the roster who could have taken on those assignments. Keith Aulie did just as poorly with easier minutes. No one else even came close.

Mikkelson is a pending RFA and Gervais is a pending UFA. There is possibly a decision to be made between them, though that has to be made based on more than this kind of analysis. Pending UFA Brett Clark, however, could easily be let go to make room for either a Norfolk Admiral (Mark Barberio) or a free agent veteran. These spots are the place where defense upgrades will have to take place and any of the four blueliners at the bottom of the chart (Commodore, Lee, Mikkelson, and Gervais) or Brett Clark could see themselves elsewhere next season.