The Replay: Anders Lindback and the Pittsburgh Penguins power play

Anders Lindback has been criticized for his poor numbers in Tampa Bay's only two losses this season -- but does he really deserve all the blame?

Share All sharing options for: The Replay: Anders Lindback and the Pittsburgh Penguins power play

Recently, Tampa Bay Lightning goaltender Anders Lindback has come under fire for his poor numbers in the two games he's played so far this season -- the season opener against the Boston Bruins and a recent 5-4 loss to the Pittsburgh Penguins when a late power play goal by Matt Niskanen sealed a win for the Pens despite a solid effort by the Bolts.

Some have even gone as far as to suggest that Lindback should never start another game for the Lightning.

They'd have you believe it's no coincidence that the Lightning are winless with Lindback in net and undefeated with messiah Ben Bishop between the pipes.

They'd also have you believe outrageous statements like the following:

Unfortunately, stability's not something Lindback's brought to the Lightning. His 4.07 GAA and .843 save percentage in two starts this season prove that much. Horrible as it sounds, this pathetic loss should mark the end of Lindback's starts.

OK, I'm not even sure where to begin with this.

Aside from the inanity of that quoted comment and the premise in general of the piece in question, the argument contained within hinges on pretty much a single goal allowed -- Matt Niskanen's late winner on the power play, with 18 seconds remaining in the third period.

Five goals on 26 shots, and the winner coming with 20 seconds remaining. All that after your team had just bailed you out once again, intent on earning at least one point.

I'm sorry, but when your teammates play their tails off against a very good team they probably expect a little help in the form of huge saves at key moments. And what could be bigger than mere seconds remaining in a tie game?

@mpukalo @BoltProspects Actually, I was there. It's pretty clear his positioning was so bad it allowed the game-winner.

@DangleDoppler Fact is Bishop's proven more to this point. 2 goals or less per start opposed to Lindy's 5 and 3 per start.

So I think we can fairly boil down her argument to a few succinct points:

Let's set aside some of the other holes in her argument that I've already discussed ... like sample size ... and some I'll just flat out ignore, like the idea that "clutch" ability is something that exists. (It isn't. At least not in a quantifiable sense.) Or that save percentage on the penalty kill is something you can actually be good at. (It's not. Check here, here, and here.)

Instead, I wanted to break down the goal in question and see if Lindback's positioning really was so atrocious that he ought to be glued to the bench. And so we'll introduce a new feature on Raw Charge, something tentatively titled "The Replay", where I'll do my best impression of Bobby "The Chief" Taylor and try to diagram a play for you using screenshots culled from NHL GameCenter Live. Justin Bourne of The Score does posts called "Systems Analyst" which are superb. You should absolutely read them. "The Replay" steals borrows heavily from "Systems Analyst".

Earlier in the game, Pittsburgh set up their typical power play formation: 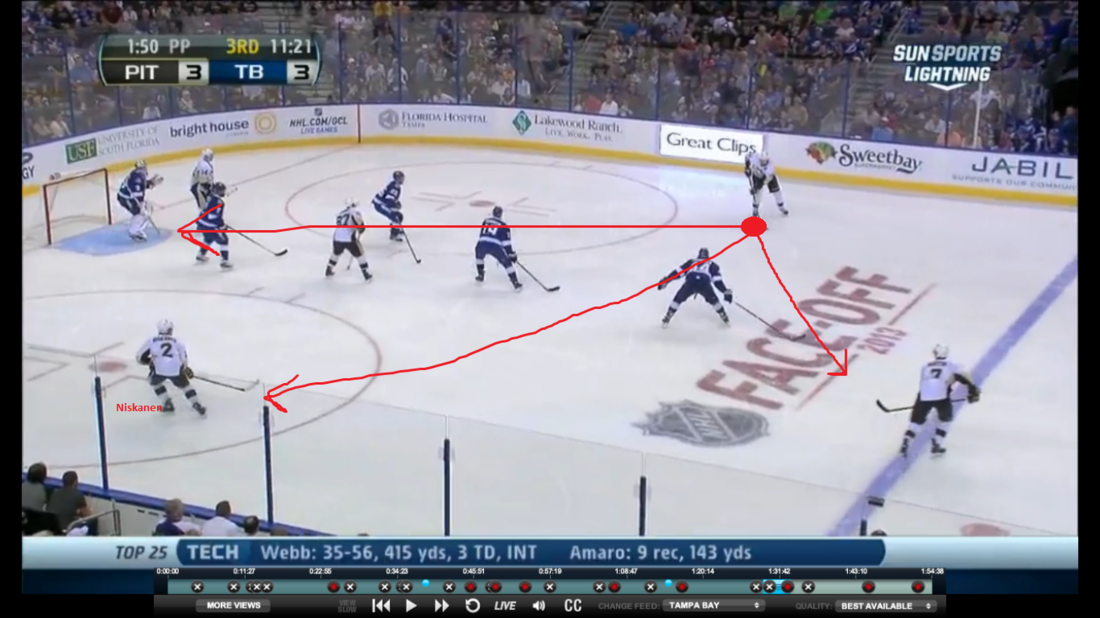 Pittsburgh's alignment is a fairly standard umbrella, with three men across the top of the formation, a guy setting a screen in front of the goalie, and a player (typically the center) available in the high slot for deflections, tips, and opportunities to shoot. In this instance, Matt Niskanen is on the left side of the alignment and Sidney Crosby is the man in the high slot. The umbrella creates three lanes for the puck carrier on the far wall -- through the slot to Niskanen, back to center point, or towards the net.

Here's another look at the same concept, now with Niskanen holding the puck on the left side. Notice how he has the same three lanes, and will look to make a pass depending on what the penalty killers decide to take away -- they can't take away all three lanes without coming way out of position. Lindback has to read and react based on those three lanes while contending with the man sitting on top of him. 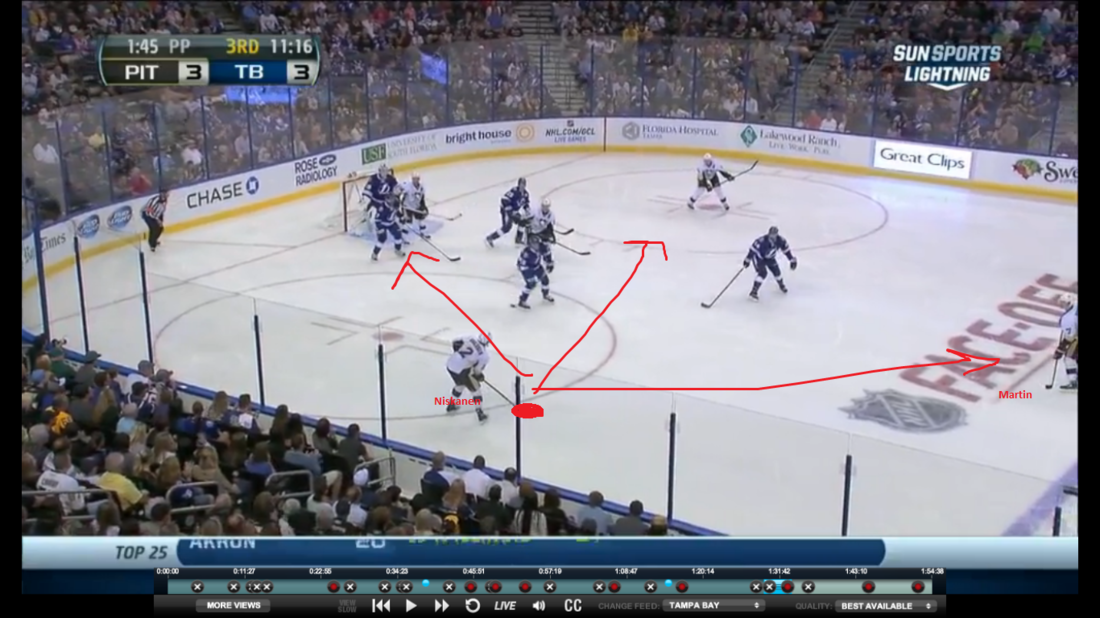 Now we get to the man advantage of interest -- with less than 30 seconds to go in the game. Pittsburgh sets up their umbrella, with the two low forwards even closer to the net. With the extra man and so little time left, there's little reason for them to fear giving anything up shorthanded, so both guys are close to the net looking for tips or rebounds. I've highlighted Tampa Bay's penalty killing formation below, again, a fairly standard diamond alignment which almost every NHL team uses, especially against an umbrella attack. Notice how Lindback is low and square to the puck: 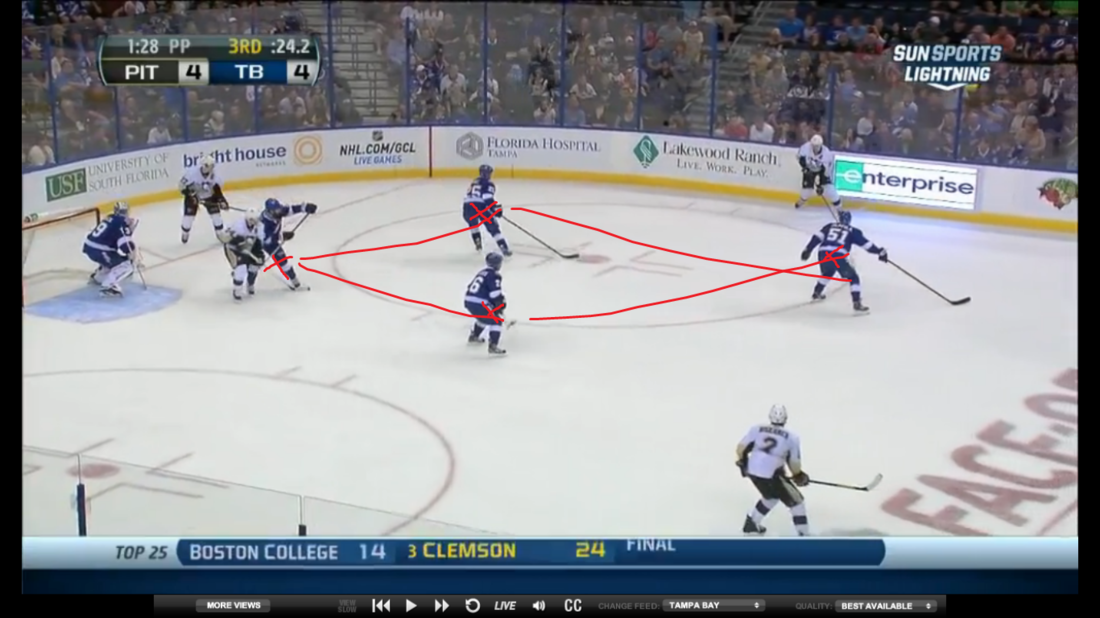 So what goes wrong here, if the Lightning are in the right spots to defend?

The puckhandler in this case on the far half-wall is Evgeni Malkin, so the Lightning PK guys are collapsing to the middle. They respect him as a creative offensive player and are desperately trying to get to OT and pick up a point. Things go wrong when Malkin drifts down the wall towards the corner, opening a gap between Matt Carle and Valtteri Filppula which Malkin exploits with a quick pass through the slot. Martin St. Louis, the weak side forward as the pass is made, steps up to (in theory) block any one-timer coming. Lindback is forced to read the pass from his left to his right, but has to see through Radko Gudas, Chris Kunitz, and Martin St. Louis to even find the puck, and he has to react quickly to see if the pass is going across to Niskanen or up to Martin. 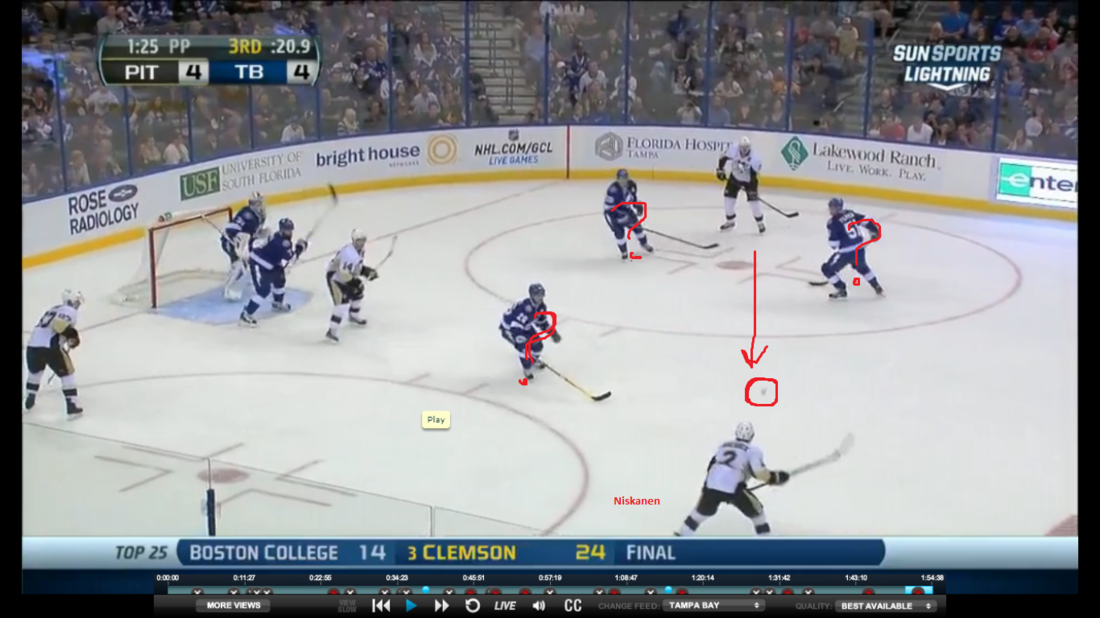 St. Louis seems to flinch and duck out of the way of the one-timed shot, rather than squaring up to the puck and making a strong attempt to block it. You can see that better here: 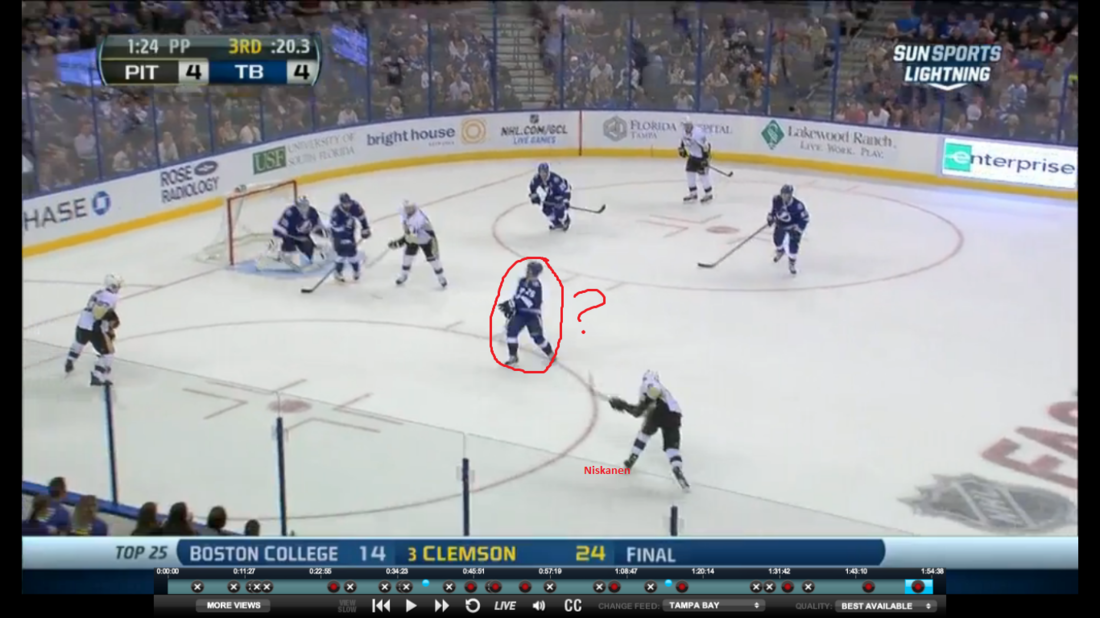 Don't mistake that as questioning St. Louis. There's at least a decent chance he knew he wasn't going to make it in front of that shot, and decided he was better off saving his face by getting out of the way. Clearing the shooting lane also gives Anders Lindback a better look at the shot so that he can save it. Here's a better angle of that, and you can see why St. Louis might decide he's better off letting the shot go. You can also see Lindback attempting to track the puck through the mass of humanity in front of him: 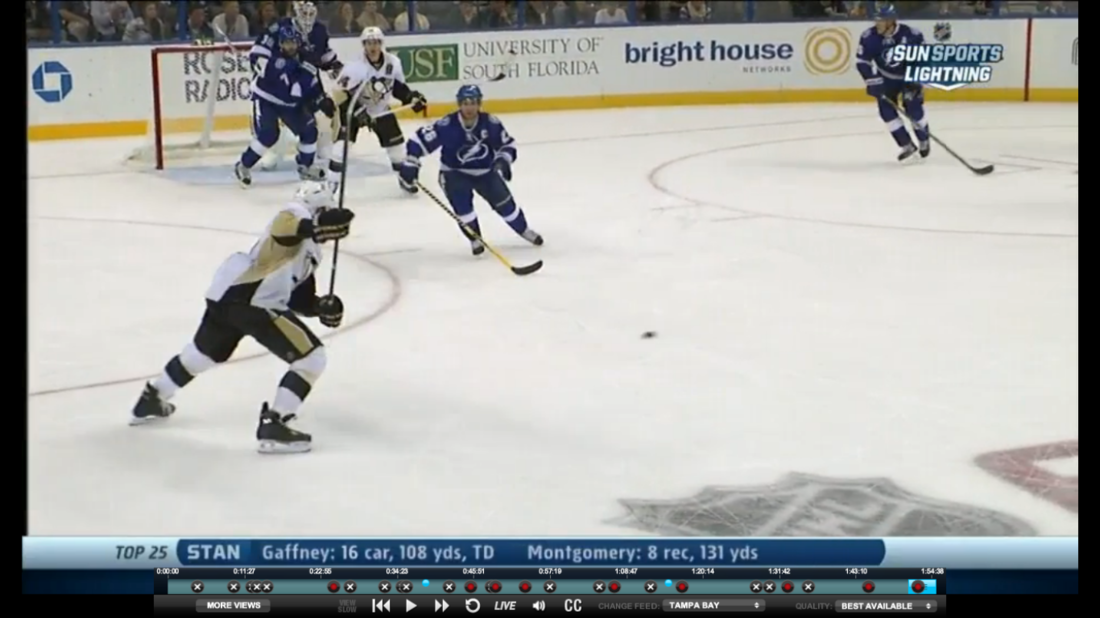 Here's the most damning shot for the Lightning PK, and the real reason we should cut Lindback some slack on this play in particular. Literally at the exact moment the puck is fired on net, Radko Gudas turns to his right and squares up to the puck -- directly in front of Lindback's face. Lindback is completely screened. He has no idea where the puck is in this moment, so he drops to ice to try and cover as much net as possible, hoping the puck either goes wide, gets blocked, or hits him in his pads. 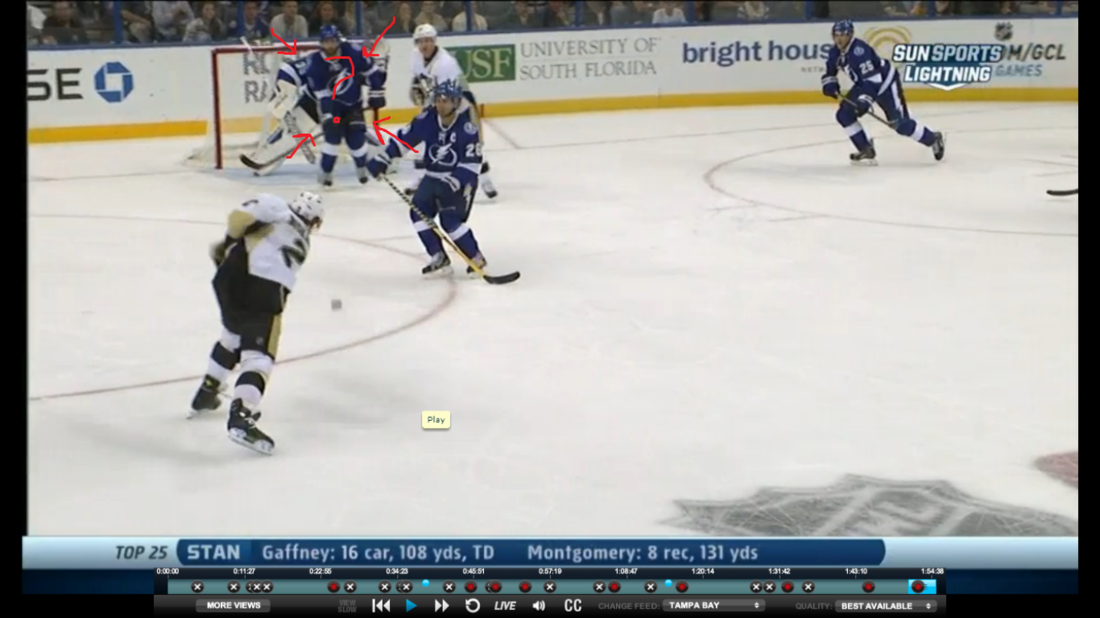 Unfortunately he's not so lucky. But to crucify Lindback for "bad positioning" on a power play goal against when literally every skater on the ice made some sort of mistake or questionable decision (Carle and Flippula didn't close the passing lane through the slot, St. Louis didn't get in front of the shot, and Radko Gudas screened the crap out of his own goalie) is just plain wrong.