There are reasons to hang in there, Lightning fans

The injury to Steven Stamkos is undoubtedly bad news for anybody with a rooting interest in the Tampa Bay Lightning. But writing off the remainder of this season would be a big mistake.

Share All sharing options for: There are reasons to hang in there, Lightning fans

If, like most people, your definition of "bad" is "not good", yesterday was a bad day.

Steven Stamkos' broken leg is a bad thing. Nobody would be stupid or disingenuous enough to suggest otherwise. Losing your best player when that player happens to be the best player in the league (yeah, I'm saying it) is bad. It's the worst possible hit this roster could take. At the risk of adding yet another meme to the internet: 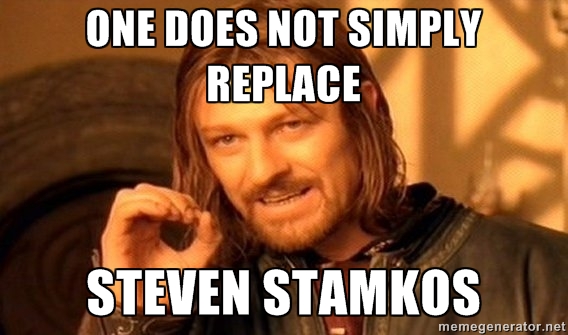 I hear some of you out there. You're thinking it's over, hopeless, no point in going on. I'm here to ask you to persevere, to at least consider hanging in there in spite of the fact that some of the best case scenarios suggest we won't see Stamkos on the ice until May or June. No question about it, it's a bad situation. But is it devastating? Only if devastation follows, and there are significant, tangible reasons... not just glass-half-full, die-hard fan, crossed-fingers hope... to believe that won't happen.

They're currently the #1 team in the Eastern Conference. Are they as good a team without Stamkos? Of course not. Are they likely to hold on to that #1 ranking without him? It's very easy to argue that no, they will not. Are they likely to completely implode and fall out of playoff contention without him? I believe it's just as easy to argue that they will not do that either. They may not be a popular choice among gamblers to win this year's Stanley Cup but there's no reason to think that a return to the playoffs is out of the question.

Let's not mess with a countdown or numbered list and just get to the heart of the matter...

The Team Is Better

Last season, the Lightning finished 26th in Goals against per game with 3.07. This year, they're 12th with 2.47. The Penalty Kill was 19th at 80.6. It's now seventh and 85.5. As a team, they have shown proficiency and even dominance against elite teams from the Western Conference (generally acknowledged as the better of the two). And in Ben Bishop, they finally have a goaltender who can be relied upon for consistent performance. There are areas where they could be better but generally, they're trending in the right direction in terms of showing improvement.

The Team Can Get Even Better Still

Obviously, it's unreasonable to plug someone into Stamkos' spot on the roster and expect him to fill the vacancy. "Here, Nikita Kucherov, go out there and be Steven Stamkos." However, it's not unreasonable to expect that several players pitch in and combine in order to compensate for his absence. Remember, this is a team that for whatever reason, has shown an annoying reluctance to shoot and create offense, a trait that would have been far more annoying if not for the fact that they've been winning games. Only recently has that trend shown signs of dying off. Stamkos' absence could inspire a sense of urgency to kill it off outright.

This Is A Test

Much has been made of head coach Jon Cooper's ability to engage and motivate his team. With a first place team suddenly deprived of his most potent offensive weapon, we're about to find out exactly what there is to the Cooper mystique. If he navigates this challenge successfully, there's no telling what kind of benefits this could yield in terms of the team's confidence level, both short and long term.The good news is his track record indicates that he's ideally suited to deal with this kind of challenge. It certainly doesn't hurt that his team captain is Martin St. Louis who suffered a broken leg in 2002 and is the virtual embodiment of not giving up easily.

One Player Is Not A Team

I won't attempt to make the argument that since the Lightning have shown improvement as a team following the departure of Vincent Lecavalier, that the loss of Stamkos is no big a deal. For one reason, it's truly apples-and-oranges in that Lecavalier and Stamkos are different players with different skill sets at different stages in their respective careers. For another, I think I've already established that the loss of Stamkos is bad, as in not good. However, there is merit in pointing out that the depth in the organization, which has been GM Steve Yzerman's focus since Day One, is an organizational asset for exactly these kinds of circumstances: the loss of superstar players, either temporary or permanent. No, you can't call Syracuse and say "Send us a Lecavalier or Stamkos". But you can call Syracuse and get a talented player (or two, or three, or four) to fill in and contribute as opposed to having to get on the phone and make a panic-inspired, ill-considered trade.

The bottom line is that if this team is going to fall apart after the loss of one player, even if he's the best player in the league (yeah, I'll say it again), then they weren't that good of a team to start with, and I simply don't believe that's the case.

Steven Stamkos injury coverage - when will the superstar make his return tot he Lightning?