Share All sharing options for:  2013-14 Lightning advanced statistics through game 20

Every ten games or so, we'll be taking a look at the Tampa Bay Lightning's "advanced" statistics to see how things are going under the hood, so to speak. Unless otherwise indicated, stats are from ExtraSkater and NHL.com.

When last we left this story, the Lightning had a 101.9, which is a scooch high, but not terribly so. There certainly have been teams that have managed a 5v5 PDO around that or higher over an 82-game season. It's at the high end, though, so some regression is more likely than not. Right now the Lightning have a 5v5 PDO of 101.4 (according to ExtraSkater), and is the result of a slightly high 9.3% scoring rate and an on-target .921 save percentage. I do expect that scoring rate to come down a little bit more, especially with Steven Stamkos out of the lineup for the next three months. If the goaltending drops or rises a little bit, that's not anything to be alarmed about. It won't have much short-term effect.

The Bolts have already experienced a lot of the regression that I've been expecting over the past several weeks, to the point that I think their 5v5 results are more or less in line with their underlying possession measures. Remember: regression is simply change in numbers based on gaining more data. It's not *caused* by anything other than more games being played.

That's not the case with possession numbers, and here I'm liking what I've been seeing, though I'm still cautious. At the 20-game mark, the Lightning have played 5 games in which they took less than 42% of unblocked shots when the score was tied or within one goal (the Bruins game on Nov 11 was messed up there at the time I'm writing this; it was 46.2 FF%, not 0). There were another 3 games that they took between 42% and 48%. That is, after accounting for score effects, the Lightning had terrible puck control in a full one-fourth of their games and in 15% of their games they were no better than okay. 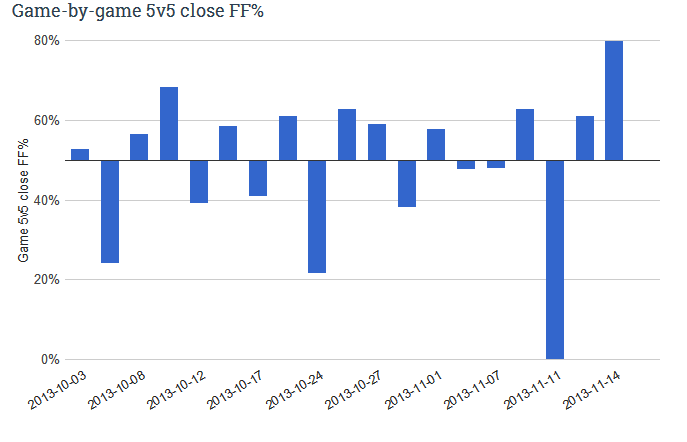 The good news is that most of those games are from earlier in the season and they haven't had a game under 40% since October 29 at the New Jersey Devils. At the same time, they've had 3 of the 6 games where they took 60% or more of unblocked shot attempts since November 9. In fact, possession has really ramped up in the month of November, and that's good because having a lot of luck without doing all the little things right is a recipe for a crash. As of now, the Lightning have made it above 50% for the season. 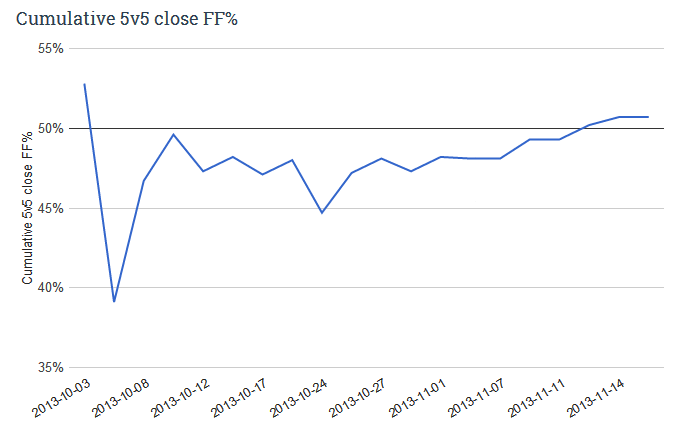 And it's really good to see that the team is getting those fundamentals in place. If they keep this up and if those below 40% games become just early-season anomalies, what we see going forward might be real. In case anyone was wondering, though, this is what a great team's possession graph looks like. 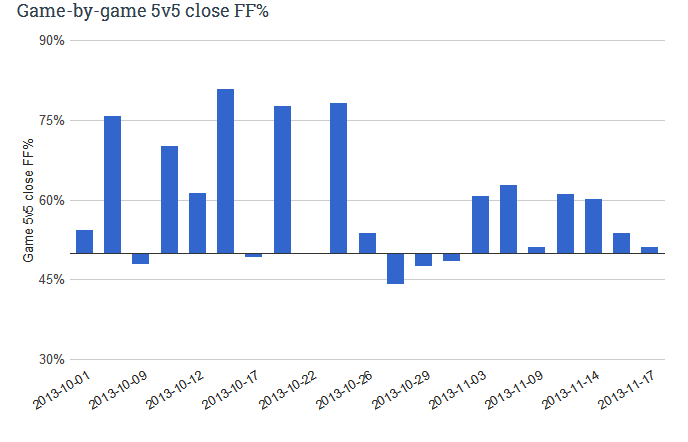 This is the Chicago Blackhawks' game graph after 21 games. And when you add all that together and consider that unlike some other great possession teams, they have a 101.0 PDO (meaning they're not getting unlucky), you can see why they're at the top of the league. 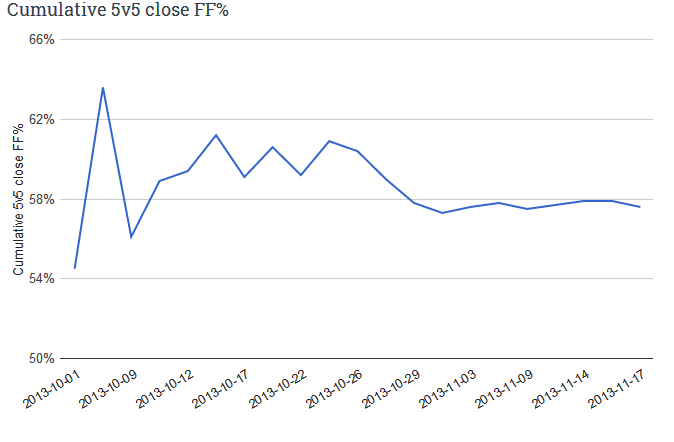 And that, in a nutshell, is why people have kept asking if the Lightning are for real. Through randomness alone, teams can rack up a lot of wins even in the absence of good, solid underlying performances. This season's Lightning might be for real in the end, but only if their play is in line with their results going forward. They have built in a cushion in the standings based on getting lucky early in the season, and they've gotten to the point where they're matching those results with the kind of dominant zone play they need to. But for things to keep going in the right direction, it's better to be good than lucky.

Special teams: The Lightning's 15th-ranked power play (19.2%) and 7th-ranked penalty kill (84.5%) give the Lightning a 103.7 Special Teams Efficiency. That indicates that the team's results are influence a bit strongly by penalty kill success that likely won't continue. Ben Bishop has a .922 save percentage when shorthanded. Only 4 goalies who have played more than 8 games have a higher PK save percentage.

Goaltending: The Lightning have had 11 games where goaltenders put up a 5v5 save percentage above .920, which is how I'm looking at an NHL Quality Start these days. One of those was Anders Lindback's game 1 in Boston, giving him a QS rate of 25%. The rest are Ben Bishop's, for a QS rate of 63%. For the AHL goalies, we have to use overall save percentage and the median AHL save percentage is lower than the NHL median, so the bar is set at .910 in a start. Kristers Gudlevskis had two (50%), Cedrick Desjardins has had 3 (43%), and Riku Helenius has has 2 (50%). In all of these cases, the goaltenders gave their team a good chance to win the game.