I get it. You see the glamour of the late nights, the gallons of coffee, and the pointless twitter arguments and you think to yourself, "how can I get in on that sweet, sweet deal? I've seen what these schmucks do. It can't be that hard." So if you're looking for the Big Blogging Bucks*, you're in luck. SBNation and Raw Charge can teach you. Yes, even you. So pop open the laptop, grab the Orange Crush, take off your pants and come into the basement.

*These are the bucks you'll be shelling out for season tickets, internet paywalls, and NHL GameCenter or Center Ice. No one makes money at this.

Step One: Watch lots and lots of hockey.

I mean a lot of hockey. We're talking more hockey than you thought anyone could watch without turning into a Zamboni. Or a Canadian. Watch so much hockey your friends disown you and your spouse is packing to leave. Way, way more than one game a week. At least three or four. Watch as many different teams as you can as often as you can so you can see what's possible, what's good, and what's bad. The more you watch the more you learn.

Step Two: Read about hockey whenever you're not watching it.

Read all the national media like Puck Daddy, ProHockeyTalk, and Backhand Shelf. Follow the local beat reporters (in Lightning Land that's Erik Erlendsson and Damian Cristodero). Follow Bob McKenzie and Elliotte Friedman on Twitter. There are many, many others to read and know and follow, but if you can't do these seven, you won't be informed enough to do this right. You should also know the basics about the prospects and the minor league system, but again, if you don't have a solid foundation, knowing a lot of players' names is useless.

Step Three: Have an intelligent opinion.

Most people think this is the easy part. Everyone you know has an opinion. It's actually the hard part.

You have to be able to turn that stuff you just yelled at the television into 500-700 coherent, properly-spelled words put together in the proper order with the punctuation in the right places. And if you can't stay on-topic for at least 500 words, you don't have a story.

You need examples. You need a coherent train of thought that's logical, well-informed, and easy to follow. Don't be fancy; be clear.

Write. Write a lot. Put your properly-punctuated and fleshed-out opinions out there for everyone to see. Get feedback. Don't expect all of that feedback to be positive, but if what you're doing is good, you'll get positive feedback, too. And you'll learn how to tell the difference between criticism you should pay attention to and criticism you should ignore.

When you've got your 500-700 words together, come to RawCharge and post a FanPost. The link is on the right side of the front page just below the fold: 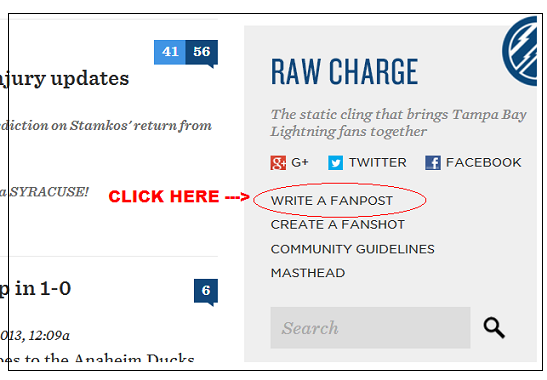 Fill out the form. You can type directly into the boxes or paste from a word processor. Add pics and videos if you want. Be sure you have permission to use anything you post or we'll have to take it down. 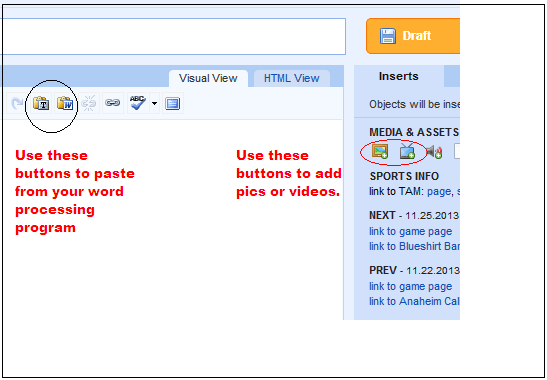 Link to everything that someone else said. Give proper credit whenever necessary. Err on the side of caution when citing other people's thoughts and words. Follow the Raw Charge Community Guidelines, which have some good and very relevant information about posting here (like under what circumstances the editors will edit or correct what you've posted.)

Follow the instructions in the form and click the Autotag button. Preview lets you see what you've got before your post goes live to the world. When you're satisfied, hit Publish.

Step Five: Go back to Step One and do it all over again.

One post does not a blogger make. If you want to do this for real, you have to keep doing it. Again and again and again. Be thoughtful, be honest, be dedicated. Keep at it and you'll get better and you'll get noticed. It's a long season. Blogs need writers who will stick with it for all 82 games, plus the draft, plus the trade deadline, plus the horrible soul-deadening doldrums of the offseason.

If you want to write, you have to write. Just keep doing it and keep trying to get better.

FanPosts are not just for people wanting to be bloggers. They're also for starting general discussions and interacting with the community. Anyone can post a FanPost on any hockey or Lightning-related topic. We love them around here because it shows us where our audience is at.