If you want to know what Jon Cooper's 2011-12 Norfolk Admirals or 2012-13 Syracuse Crunch looked like when they were running all over the AHL, look no further than the first period of tonight's game against the St. Louis Blues to find a taste of that. There was speed, sustained time in the offensive zone, and periods of excellent puck control. The Lightning didn't dominate like Cooper's AHL teams were capable of, but they controlled 51.9% of shot all attempts at 5v5 and 50% of unblocked attempts. 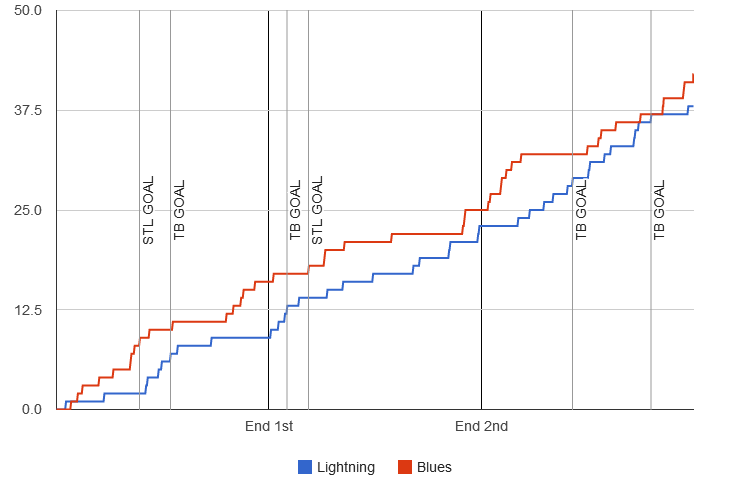 In short, they looked a damn sight better than the team that Cooper described as stagnant and stale before Friday's game against the Carolina Hurricanes. Cooper remarked after tonight's game, "I thought tonight was probably our most complete game."

(Scroll down for details and video on the goals.)

Going in, observers knew the Blues would be a tough opponent. They came to Tampa with a 8-1-2 record and a reputation for fierce defensive play. They also had Alexander Steen, the only player in the league with more goals (12) than Steven Stamkos (10, though he added one tonight). But the Lighting matched up very well tonight against one of the best teams in the league. It bodes well for the rest of the season.

There is still some work to be done, of course. The power play still allowed some shorthanded chances against and by the end of the game was letting the Blues prevent them from gaining the offensive zone, even with the man advantage. As the game wore on, it became harder and harder for the Lightning to control the puck at the blueline. One huge turnover by Radko Gudas led to a breakaway that thankfully Bishop stopped. There were also too many long east-west passes that were effectively disrupted by the Blues. This tendency had a lot to do with the Lightning's difficulty with zone exits and entries in the second and third period.

The Lightning take on the Edmonton Oilers on Thursday night at 7:30pm ET at the Tampa Bay Times Forum.