The former 1st round pick from 2011 made big strides last season in his professional debut with the AHL Syracuse Crunch. With several players called up to the Tampa Bay Lightning, he's now being asked to help carry the scoring load for the Crunch.

Share All sharing options for: Top 25 Under 25: #10 Vladislav Namestnikov

Vladislav Namestnikov was current Tampa Bay Lightning general manager Steve Yzerman's very first draft pick as a GM in the National Hockey League with a full year of his own scouting team scouting players. (You'll recall that his selections in 2010 were made after being on the job for just 30 days.)

After a surprising run to the Eastern Conference Finals the season before alongside rookie head coach Guy Boucher, the Bolts ended up with the 27th pick in the 2011 NHL Entry Draft, missing out on some of the top talent that Yzerman has been able to select in subsequent drafts due to poor regular season finishes.

But, as Yzerman and his scouting staff have shown, they're finding great young players no matter where they pick.

Here's how the panel ranked Namestnikov:

Vladdy, as he is affectionately called, is currently part of what has been so far a sensational top line for the AHL Syracuse Crunch alongside fellow Russian Nikita Kucherov and JT Brown(ov): 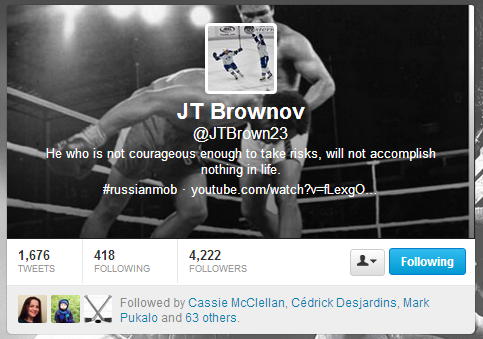 Namestnikov has 5 goals and 10 assists so far for 15 points in the Crunch's 10 games played, good for 4th in the AHL in scoring. Both he and linemate Kucherov are in the top 5 in AHL scoring, and so far, their offensive chemistry together can not be understated. Kucherov's finishing ability and offensive-zone creativity matched up with Namenstinkov's on-ice vision and playmaking ability has so far been dominating the AHL and could very realistically end up being a top offensive duo for the Lightning in the next 1-2 years.

Just take a quick peak at the scoring leaders in the AHL as of November 5, 2013: 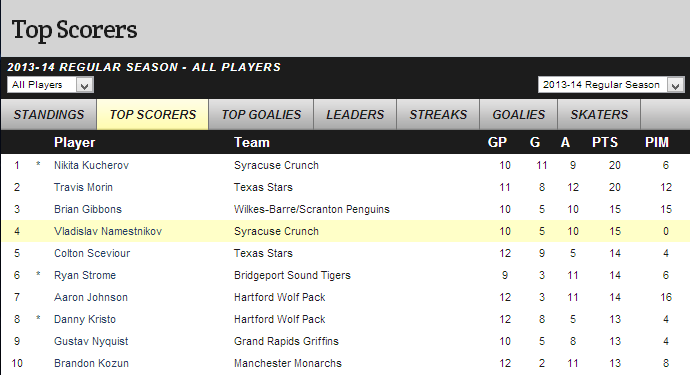 Like Cory Conacher in the past, however, it's likely that Yzerman and the organization want to see Namestnikov (and Kucherov) keep this pace up over the course of a full 82-game North American professional season, something neither player has ever done before. Last year, as rookie pro, Namestnikov appeared in 44 regular season games with the Crunch, which is actually fewer games than in a typical North American junior hockey season. And Kucherov, who split time in the QMJHL between two clubs a season ago, had only played in 26 professional games prior to this year with the Crunch, all of them as an underage player with CSKA-Moscow in the KHL.

Learning to grind away in the AHL over the course of a long season while getting stronger, more confident, and more defensively sound will be a focus for Namestnikov moving forward. As a center, he will have more defensive responsibility than the glut of wing prospects moving through the farm system right now, and unlike say, Alex Killorn, there seems to be an emphasis on keeping Namestnikov in the middle of the ice as he continues his development. So he will be expected to follow a similar path to Tyler Johnson. He'll need to be strong on the dot and around the net in his own zone, and the first forward on his horse and back into the defensive zone when transitioning away from offense. Learning to do that without detracting from his offensive game is exactly what a full AHL season with Rob Zettler behind the bench should teach him.

With 15 points in 10 games, Namestnikov is currently scoring at a nice clean 1.5 PPG rate in the AHL. Using scoring equivalencies developed by Gabriel Desjardins of Behind the Net we can adjust this scoring rate to attempt to predict how Namestnikov's scoring will translate to the NHL. On average, Desjardins found that AHL players retain about 45% of their scoring when moving up to the NHL, partly due to different usage, linemates, and competition. So Namestnikov's 1.5 PPG translates to a roughly .675 PPG game pace in the NHL, which would be good for a 55 point season. That is right in line with recent Calder Trophy winners for rookie of the year like Gabriel Landeskog (52 points in 82 games, .634 PPG) and Jonathan Huberdeau (31 points in 48 games, .646 PPG)

If you have some doubts about this methodology, look at Tyler Johnson for some evidence of its relative accuracy -- Johnson scored 65 points in 62 regular season games during his AHL MVP season (2012-2013) for a 1.04 PPG rate. Using the equivalencies, we'd expect him to score about .471 PPG in the NHL. Johnson currently has 6 points in 14 games -- for a .428 PPG rate. It's just one example but on average, the equivalencies do a good job of predicting how players will perform as they move up the ranks to the NHL, and they help to prove the concept that if you're not a big-time scorer in a lower league, it is very difficult to suddenly become one in the most difficult hockey league in the world.

While most AHL squads probably had some inkling of who the top offensive players for the Crunch would be heading into the season, that cat is miles away from the bag at this point, and Namestnikov's line is going to see the top defensive pairings and defensive shut-down forward lines the AHL has to offer for the rest of the season. How he performs with that attention will be the true test of how he is developing as potentially the second line center of the future behind Steven Stamkos.