At this point, most Lightning fans are familiar with the team's Community Hero program. But what goes into creating their big nights at the Tampa Bay Times Forum?

Share All sharing options for: Following a Lightning Community Hero

It's 6PM on a Saturday night in what is undoubtedly the busiest place in what is probably one of the busiest buildings of any kind in the world right now. The building is the Tampa Bay Times Forum, where the Tampa Bay Lightning will be facing the St. Louis Blues in about an hour and a half and the place is the lower south east corner of that building, where frenetic activity is already taking place. There goes a Zamboni. Oops, two of them. Here comes a squadron of Ice Girls. Over there, a military drill team rehearses the Presentation of Colors. Scattered around are NHL referees engaging in a series of stretching exercises. Darting here and there throughout all of it are people on headsets and walkie-talkies. Standing quietly off to the side watching it all with a bemused look on his face is a hero. 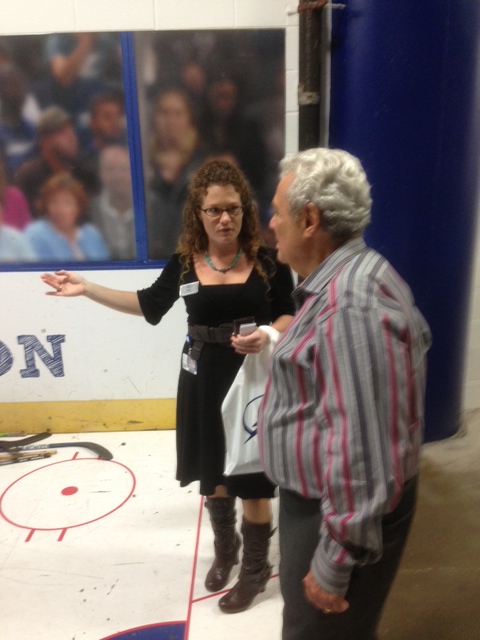 Now in its third year, the Community Hero program was just one of the initiatives launched by owner Jeff Vinik (and his wife Penny) upon taking over the team in March of 2010. Designed to demonstrate the team's role as a member of the community by giving back to those in need, the Lightning are committed to donating $10 million over five years via grants of $50,000 at each home game to a different Community Hero. Last season, when the work stoppage wiped 17 home games off the schedule, the organization recognized 41 locally nominated heroes anyway.

At 6:11, we're on our way through the backstage area of the Forum. Heidi points out the media dining room, the family waiting area and the media work room. "There's something happening everywhere you look", notes Joe.

With a presentation at every home game, the Community Heroes program may be the Lightning's most ambitious and high-profile charitable effort, but it's not the only thing that falls under the jurisdiction of the Lightning Foundation. The Bolt Run which benefits the Leukemia & Lymphoma Society, Score With Reading to motivate students, a juried art competition which highlights the works of local artists, in-game auctions and a 50/50 drawing plus the donation of tickets, pucks, sticks, and autographed items to charitable organizations are all administrated by the Lightning Foundation.

6:18 and Joe and his grandsons are sitting on the Lightning bench, where they'll watch pre-game warm-ups. It's a little colder, louder and even more intense than anything they've experienced so far. As the warm-ups continued, Joe and his entourage are retrieved by Heidi and led to Public Relations Director Brian Breseman to participate in what he promises will be the most exciting part, the locker room tour conducted by Brian Breseman. Inside, we see the equipment room where Joe's grandsons examine how light the players sticks are. We also visit where the players work out, dress and hang out eating snacks and watching television. We run into rehabbing defenseman Brian Lee who welcomes the Capitanos and congratulates Joe on being named a Community Hero. "We have limited time, so we have to move kind of fast", Breseman informs us as we move along. 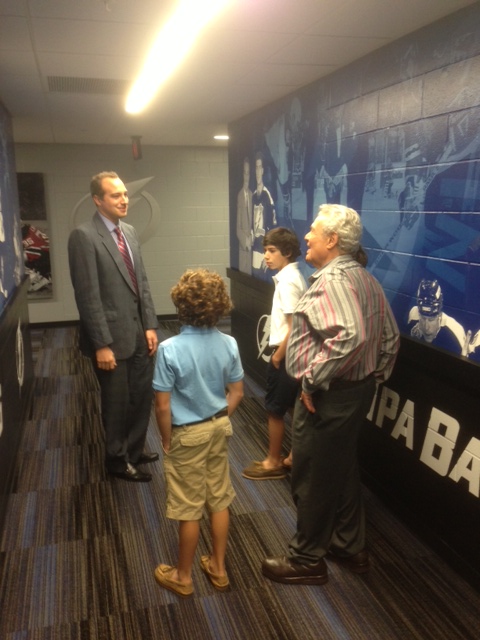 Several diverse criteria are taken into consideration when choosing Community Heroes, but all nominees are required to live in Hernando, Hillsborough, Manatee, Pasco, Pinellas, Polk, or Sarasota counties and special attention is paid to "the degree to which the Hero has been a catalyst for a cause that meets basic human needs or enriches the lives of others."

Heidi ushers us swiftly into one of the smaller satellite locker rooms at 6:47 with Chief Operating Officer Steve Griggs. He and Joe trade notes on various charitable endeavors and Joe takes the opportunity to illustrate some of his specific efforts at St. Peter Claver and Academy Prep Schools. Griggs responds by pledging help above and beyond the Community Heroes grant on behalf of the organization in the form of C.H.A.R.G.E., another Lightning community outreach program consisting of Lightning, Tampa Bay Storm and Tampa Bay Times Forum employees performing volunteer work out in the community. Soon, we're joined by Martin St. Louis who is here for the actual check presentation and the photo that will be part of the in-game presentation which will be taking place in just a few minutes. After the photo is snapped, St. Louis stops briefly to thank and congratulate Joe, exchanges small talk with his grandsons before heading to the dressing room for his last minute pre-game preparation. Photographer Scott Audette is hustling to get the photo to the in-game entertainment crew so it can be inserted into the video presentation that will be shown on the scoreboard. Heidi leads the rest of us to a nearby elevator so we can make our way to the Jabil Community Suite, where Joe's family and friends are waiting.

In the suite, there are slightly fewer people than a college marching band and one of Joe's relatives is moving people around like a drum major, making sure everyone is where they're supposed to be when the big moment arrives. It takes nearly every last second to accomplish this but when the moment arrives, everyone is ready. Joe puts on a Lightning sweater, the crowd applauds and players, including some from the visiting Blues, tap their sticks on the ice in appreciation.

When it's over, Joe finally gets to sit down to relax and enjoy the evening. Heidi is off to attend to other Foundation matters but gestures to Joe, smiles and says, "the hardest work that goes into all of this has already been taken care of."