Why NHL GMs are giving big contracts to starting goaltenders

General Managers aren't acting irrationally by signing goalies to longer contracts. They're responding to changes in goaltender performances over the past few years.

Share All sharing options for: Why NHL GMs are giving big contracts to starting goaltenders

A lot of the analysis of goaltending contracts--especially those long-term, high dollar contracts given out to starters in recent years--focuses on just how much better a goalie would have to perform than a no-name replacement player to "justify" their contract. It's based on the assumption that goaltending is value added (goals saved=extra wins) to a team's offensive power and that goaltending is only useful to the extent that wins are added above a certain threshold.

There's a problem in that this kind of approach has brought otherwise smart hockey people to propose that for all intents and purposes any goaltender is, from a contractual standpoint, as good a bet as any other. Therefore, the logic goes, all other things are equal enough that a general manager is irrational to choose a goaltender that he must pay more. The difference in performance between replacement-level goalies and star goalies is both too small and too unpredictable, they say, for it to be worthwhile to pay star goalies a lot of money for a long time.

This has led to some pretty odd assertions about the importance of goaltending. Assertions like: "Goalies that actually help a team win are rare" and "Buying a top goalie is like giving away between half a win and a full win per season." If there really is only a miniscule difference between a replacement-level goaltender at around $1 million and someone like Henrik Lundqvist at $8.5 million (a difference of about 4.5 wins a season), then a team can in theory save themselves millions of dollars a season in perpetuity by rotating a series of AHL goaltenders in and out of their NHL rosters, paying them almost nothing, and using the extra money on offensive players.

Unfortunately, this doesn't work in the real world. And we know from experience that this doesn't work. We know that there's a difference between a goalie playing at a .930 level and one playing at a .900 level. The "just some guy in net" approach doesn't actually make for a winning team, no matter how powerful a franchise's offense is. If you're writing an article and you're in any way tempted to make a statement implying that goaltending choices don't matter at the NHL level, just stop, because you're wrong. Imagine what would happen without goaltending and then rethink your conclusions. It still matters who you have in net, despite what the analysts have told us so far.

This analysis fails because they're looking for the difference between a top goalie and a replacement goalie at the wrong end of the stick. What matters in NHL goaltending, for both contracting and competitiveness, is not a goalie's performance ceiling, but his floor. And as save percentages continue to rise across the NHL, that floor becomes increasingly valuable to a team. It's not how many "extra wins" that matter in paying a goalie. It's how many more game minutes a goaltender can keep the score close.

The overall profile of NHL goaltending is changing. Goaltending talent is bunched closer together than it was seven or eight years ago. The difference between the top goaltenders and the bottom goaltenders (on a season by season basis) is decreasing over time. 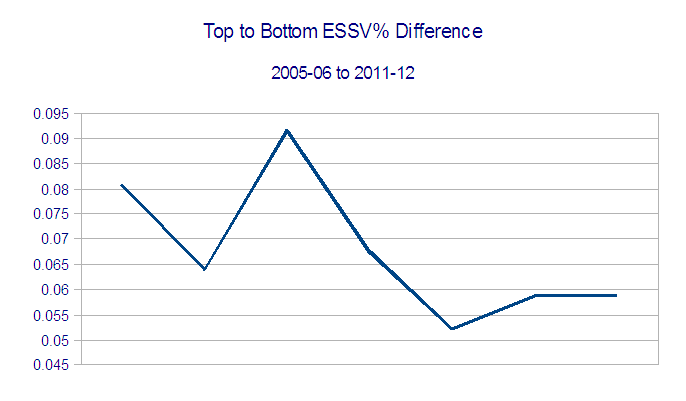 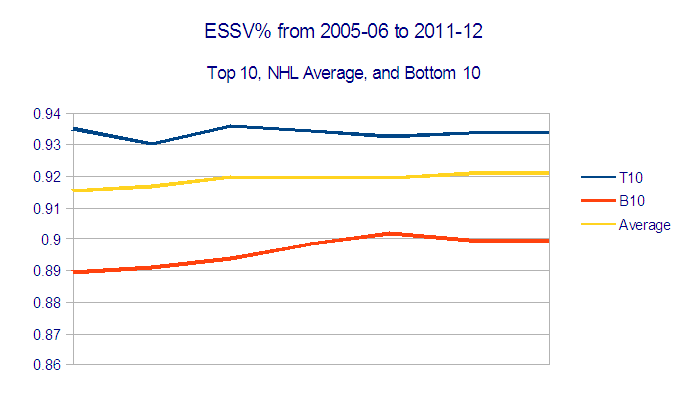 And that actually makes goaltending more important than ever before. The harder it is for your offense to make a difference at one end of the ice, the more critical it is that your goaltending be adequate at the other end. A general manager may not be able to predict where his goaltending will level off at, but he has to have goaltending that sits within an increasingly narrow range in order to be competitive. The closer a team's goaltending is to the competitive floor, the less predictable their season becomes.

Starting goaltender salaries are going up as GMs face two related phenomena: it's increasingly important to manage goals against to stay competitive but it's very, very difficult to predict what numbers a goaltender will put up over a season. This leads them to manage uncertainty whenever they can by locking down those goaltenders who they believe will provide a basic minimum of value over time, as opposed to value over the short term.

All the questions about whether goalie A or B can "live up to" a seven-year deal by stealing games are missing the point. If a goalie can give a team excellent to elite goaltending in some of those contract years, they're ahead of the curve. If they can get provide four out of seven years of solid, moderately consistent, at least league average or better results, they're not losing ground. And franchises simply cannot afford to lose ground. GMs are paying a premium for a more predictable floor that they believe will place their team more firmly within a narrow band of performance.

The problem with using low-priced goalies as a benchmark for the goaltender market is that most of those low-priced surprises are even less predictable than the starters getting those high-dollar contracts. The fellows who are surprising us with cheap but extraordinary seasons are career backups, guys on entry-level or low-dollar second contracts, or promoted AHLers. They have faced fewer shots than guys with two or more years as a starter and they haven't shown extended levels of consistency. General managers know more about the Henrik Lundqvists and Jonathan Quicks of the world than they do about the Ben Scrivenses and Brian Elliotts.

So when it comes time to plan for the future, one thing a GM is sure of is that his team cannot be competitive with goaltending that's much below average, no matter how good his offense is. Adequate goaltending is a competitive necessity (somewhere just south of league average is the bare minimum for a successful season). And he knows that more data about a goalie helps him narrow down an expected performance range. He knows that he'll have to rely on good, old, eyeball-test scouting to a large extent because save percentage doesn't really help enough in evaluations.

So he's going to go with the guy who's most likely to give him the better level of predictability and whose performance he can assign some kind of floor to, as soft a floor as that may be. And the higher the minimum expected performance is, the less the general manager has to worry about for the next seven years.

In other words, the changes in the league's goaltending talent profile don't make the admittedly small differences between goaltenders less important. They make them more important. And these changes make it more important not only to have a starting goaltender about whom some kind of prediction can be made, but to have an adequate pipeline as well.

A franchise's backup goaltender and their 3rd and 4th goaltenders have to provide some measure of redundancy to the system. Otherwise, you've lost your floor. You're paying them to be inadequate, you can't promote them when the need arises, and you can't trade them for other assets. A franchise that doesn't take care in scouting, developing, acquiring and holding onto goaltending talent--a franchise that looks at save percentage bunching and surprise seasons and says "well, in that case, any guy in net will do"-- is a franchise living on the edge of danger. Because you get the kind of talent you deserve if you don't take care.

To be clear, this does happens in many systems for long periods of time. There are many examples of the the problems that come when a team's goaltending is too far below the cluster. The Lightning are living proof of the folly of relying too heavily on hit or miss goaltending for too long a time. The misses may certainly happen to any team, but filling out a pipeline of goaltending talent that can reasonably be expected to fall within that increasingly narrow and increasingly high band of performance is essential. That begins with a starting goaltender, if you can find one, but it ideally includes minor-league goalies and other prospects.

Save percentage is rising because the floor is rising. As the floor rises, it becomes increasingly important that your goaltending reach that minimum. You don't have to have goaltenders who will steal every game but you do have to have goaltenders who will keep you in games. Cheaping out on goaltenders repeatedly because someone will be unexpectedly successful every year is poor planning. A goalie who has put up a good to great performance over several years can be presumed to have a more predictable floor than one who has less than a full season in the NHL under their belt. Analysts who look at the variability of goaltenders' save percentages over time in terms of their ceiling are forgetting that the performance floor is at least if not more important to NHL teams.