Checking in on the Tampa Bay Lightning and reading between the numbers to see what analytics can tell us about what's happening on the ice for the Bolts.

Share All sharing options for: 2013-14 Lightning advanced statistics through game 30

Every ten games or so, we've been taking a look at the so-called "advanced statistics" (or analytics, for a less pretentious moniker) for the Tampa Bay Lightning to see what trends are developing and what narratives we can confirm or debunk. Unless otherwise indicated, all statistics and graphs are pulled from ExtraSkater.com.

We usually start with PDO because it informs and contextualizes so much of the other stats that follow by demonstrating just how lucky (or unlucky) the Bolts have been lately. If you'll recall, PDO is a simple statistic that simply adds together shooting percentage + save percentage. Any figure significantly above or below 100.0 suggest an overly lucky or unlucky team due for some regression to the mean, either upwards or downwards but always towards 100.0.

When we last checked in, the Lightning were sitting at a 101.4 PDO, in the upper third of the NHL for that mark. Today, the Lightning PDO is still 101.4 and still in the top 10 (8th) in the NHL. Twenty games in, Raw Charge's own Clare Austin predicted this:

Right now the Lightning have a 5v5 PDO of 101.4 (according to ExtraSkater), and is the result of a slightly high 9.3% scoring rate and an on-target .921 save percentage. I do expect that scoring rate to come down a little bit more, especially with Steven Stamkos out of the lineup for the next three months. If the goaltending drops or rises a little bit, that's not anything to be alarmed about. It won't have much short-term effect.

Clare was more than a little bit prescient, as the scoring rate has definitely come down for the Lightning post-Stamkos injury. The team is now shooting at 7.3% during 5v5 Close play, down a full two percentage points from where they were barely ten games ago. Losing a player with a career 17.5% shooting percentage will do that.

Where they've made up ground to keep their PDO exactly the same has been goaltending. The .921 save percentage -- right around league average -- has ballooned up to .941, which is ridiculously good and probably unsustainable, even given how good Ben Bishop has been playing of late.

If there is one area where the Lightning have significantly improved their game over the last set of 10 or so match-ups, it would absolutely be puck possession.

When Steven Stamkos went down with injury, the common refrain was that the Bolts would have to stick to system play and buckle down to play tighter defense, be smarter with and control the puck in order to succeed. Without Stamkos dynamic scoring ability, the Bolts simply couldn't afford to make big mistakes with the puck. If there has been a silver lining to his absence in the lineup, we're seeing it with the improvements in puck possession which are at least in part due to an overall improved team effort.

A quick look at the rolling 10-game Fenwick For% at 5v5 Close demonstrates the recent upward trend in possession: 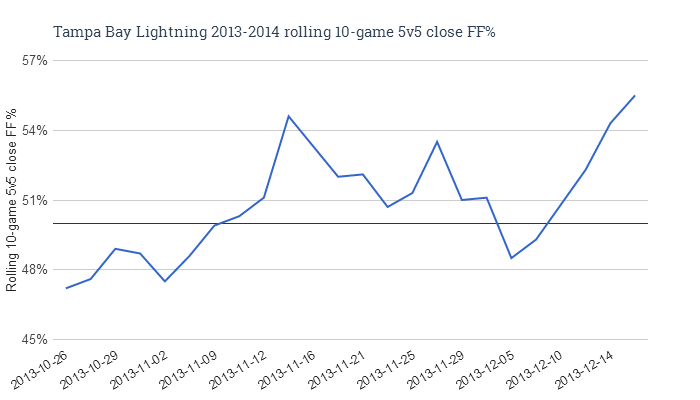 The Bolts have been at 50% or better in the vast majority of their games since early November, with only a few sub-50% games since Stamkos broke his tibia. They've also been on a roll lately, with games nearing or surpassing 55%, which is outstanding. It is possible we're starting to see months of work by Jon Cooper and his staff implementing their systems come to fruition as the Lightning are, at the very least, beginning to show signs of sustained positive puck possession.

It's not secret that this is one area where the Lightning continue to struggle. The power play continues to plummet down the league standings and currently sits at a paltry 15.5% (22nd). The penalty kill, however, remains quite good at 84.4% (10th) and is keeping the Bolts' Special Teams Efficiency (STE, a figure that works just like PDO) at 99.9, almost exactly where it "ought" to be.

I wouldn't expect the power play to stay this cold for long, but the penalty kill has remained stable around 82-85%, so that's one area where the Lightning have been consistently good through each of the 10-game chunks investigated so far. As for the drop in power play production, it seems reductive and obvious to blame everything on the Stamkos injury but it's pretty easy to point to that as a contributing factor.

Perhaps more troubling than one player's absence is the Lightning's shocking inability to generate shots even while up a man. The Bolts are currently creating 41.2 shots/60 minutes of 5v4 time, which is 28th in the NHL ahead of only the Florida Panthers and New Jersey Devils. The power play cannot score if the players on the power play do not shoot, and this stat more than any other highlights that fact. Compare the Lightning/s 41.2 with the top teams in the league for this metric -- the San Jose Sharks, who take 68.0 shots/60 at 5v4, or the Vancouver Canucks, who take 65.3 shots/60 at 5v4.

It's Ben Bishop's world and you're all just living in it:

All jokes aside, Bishop has already been fantastic this year and he's actually (somehow) getting better, defying logic and regression and just about everything else. His .933 in all situations improves to .941 at even strength, and while there were concerns about his bloated PKSV%, that has come down a bit to .913.

Attaching narratives to statistical trends without hard data to back up assertions is always risky business, but from here the Lightning look like a team that's starting to put together all the little pieces. There are still some obvious issues with shot generation and goal-scoring, but that's not unexpected with the gigantic hole at the top of the lineup. As the rookies in the lineup continue to grow and learn in their roles and adjust to the NHL pace, the scoring should theoretically trend upwards to match the gains the Lightning have made in puck possession and goaltending and keep them in contention for, at worst, a wild card spot in the Eastern Conference.