The theme of the season for both of these teams is Find a Way to Win. For the Lightning it's figuring out how to win without Steven Stamkos, and at various points, Keith Aulie, Eric Brewer, Victor Hedman, Pierre-Cedric Labrie, Brian Lee...pause for breath...Ryan Malone, Tom Pyatt, and Sami Salo. For the Predators it's doing the same without Pekka Rinne and, at various points, Gabriel Borque, Mike Fisher, Filip Forsberg, Matt Hendricks, Roman Josi...pause again for breath...Eric Nystrom, Nick Spaling, and Viktor Stalberg (though all but Rinne are healthy right now.)

It hasn't been easy for either group, although I venture to say that the Lightning have had the better of it thus far. They'll enter this game with a 20-11-3 record (43 points) that puts them fairly firmly in third in the Atlantic Division. The Preds come in with a 16-15-3 record (35 point) that leaves them in sixth in Conference III.

In any other season, I'd match Tampa Bay's offense with Nashville's defense any day of the week, This year, though, things are a bit strange. The Lightning have failed to make up very much for the loss of Steven Stamkos's offense, especially on the power play, but they've grown better defensively. The Predators are worse than the Lightning in every even-strength defensive category.

All the underlying stats indicate that this is a game the Lightning can win, assuming they play as much as possible at 5v5. Stil... To the extent that scoring is random--and that the Lightning seem to be struggling to score without Stamkos--this is going to be a tough game to predict. In talking with Kristopher Martel of ThePredatorial.com, I was reminded that the Lightning have a 4-1 record against the Atlantic Division and have beaten the Lightning in their last three meetings. They were high-scoring affairs, averaging 8.6 goals per game. The all-time series has also been pretty even. The Lightning are 8-6-2 against Nashville overall and 3-1-2 in Tampa Bay.

Strangely enough, the two teams actually know each other relatively well for being in different conferences. For several years, both teams have played in the Coral Springs rookie tournament leading into the opening of NHL training camps and this year, they faced each other twice in preseason. None of those games meant much, but they have given a kind of familiarity to the Predators' trips to Florida. (This year's trip also produced this outfit from goaltender Marek Mazanec, and that's got to be worth something.) 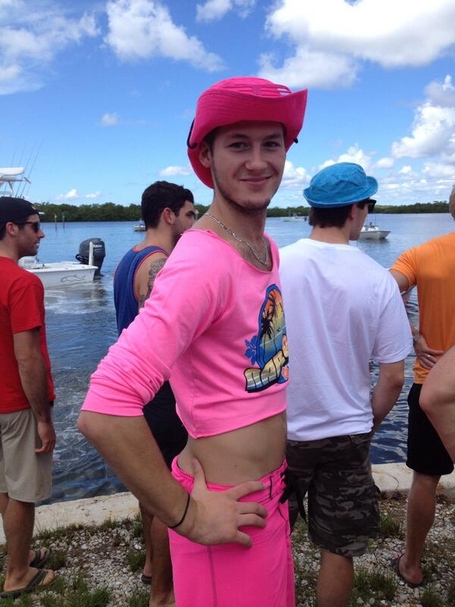 Have fun, boys, and let it be a clean contest. Cheers!