The race in the Southeast tightened this week as the Lightning have lost three in a row while the Hurricanes and Panthers pick up 5 out of 6 points on the road.

All good things must come to an end. Or, at the very least, regress to the mean. The Lightning may have set the early standard among Southeast Division teams with their 6-2-0 start, but with 3 consecutive losses, they have hit a bump in the road. Or maybe it was snowball in the windshield, as the story was told yesterday from Boston. Time to back up and find another route to get where they want to go.

No one can be blamed for outages caused by winter weather, but the Lightning's offense has not been getting the bounces either, with only 3 goals in the 2 road games so far, only one coming from the top two lines. Rookie Cory Conacher has failed to score a point over the same stretch.

The Flyers game was most notable for the controversial heavyweight bout [VIDEO] early in the game when Zac Rinaldo did not let up on B.J. Crombeen as he fell to the ice. Later, it was Vinny Lecavalier and Max Talbot dropping gloves moments after the Flyers scored in the 3rd to go ahead 2-1. In hindsight, neither of those fights was a good idea, particularly Vinny's, considering this team has made its reputation with its lethal power play.

In the game versus the Devils Thursday night, penalties again played a role as Guy Boucher was a victim of impetuous officiating when his visible displeasure led to a bench minor, and this must-see Boucher Face gif toured "teh interwebz". In all, four penalties were called against the Tampa Bay squad in the 3rd period at the Prudential which led to an extended 5-on-3 kill. Already down 2-1, they surrendered 2 goals in 14 seconds in the sequence, before falling in the 4-2 loss.

That's three consecutive losses to three Atlantic Division teams this week. Tonight's re-match versus the Rangers will allow the Bolts the opportunity to prove they can win the tough ones away from the milder climate of the Tampa Bay Times Forum. Until they turn this streak around, they are vulnerable to losing the top spot in the Southeast to at least one team that has fared a bit better this week in the Great White North.

The Hurricanes may have started their 6-game long road trip on the wrong foot in Philadelphia a week ago, but since then they've managed to earn 5 out of 6 points, included a strong showing in Toronto and downright theft in Ottawa thanks to depth defenseman Jay Harrison's game winner in overtime after the Canes were outshot by a ridiculous margin of 47 to 26 in Scotiabank Place.

Carolina, now 5-4-1, sits only one point behind the Lightning at second in the division. The Jets are tied in points, but with one more game in the books, they are hovering at third.

The big guns Alex Semin, Eric Staal, and Jordan Staal have been solid, and Jeff Skinner has been spectacular (1G, 4A, 5 pts in 3 games), but it's Cam Ward who has been the difference in the roadtrip. He's 2-0-1 with a .950 Save % - and given his rocky start early on, getting the 28-year-old goaltender back to top form is exactly what the Carolina team needed to get through the extended roadie up north.

GM Jim Rutherford gave a frank evaluation of Ward and four other players that are key to the Canes' success this season in this interview Tuesday: 5 Questions: Hurricanes Staal-ing the opposition - CBC.ca Cam was very special last night. His movement and focus was so good. What you saw last night is what Cam Ward is. I certainly wasn't in any panic mode early on [this season].

The questions in Raleigh linger regarding the defensive corps as the pairings and consistency are far from resolved. If Rutherford makes a move before the deadline, expect him to seek out another top-4 guy who will bring some size and grit on the backend. There must be plenty of those available, right?

The Canes have a back-to-back Monday and Tuesday, facing the Islanders and Devils, before they return home after eleven days on the road. They host the Toronto Maple Leafs Thursday night.

The Panthers were the third team in the division playing entirely on the road this week, going 2-0-1 before they arrived in Washington yesterday. Five points in three games on the road is always a good thing, as they stole a win in Buffalo, took the Jets to overtime in Winnipeg, then going on to beat the Flyers in a shootout.

All that was before they were on the wrong side of a blow-out in the Verizon Center. From George Richards, of the Miami Herald:

The Panthers have not only lost six straight at Verizon Center, but have been outscored 24-6 in those losses. And, unbelievably, Florida has been shutout in three of the past four games in Washington.

"We’re only eight days away from that muck," said Dineen, whose 4-5-1 Panthers will face the 2-8-1 Caps tonight at Verizon Center. "That’s what it is. I can certainly understand how the heartbeat of a season has highs and lows and they’re not on the upside."

The Capitals went on to totally dominate the Panthers last night, emerging with a 5-0 win. The two teams meet again Tuesday in Florida. Will the tables be turned yet again? They say success follows when you keep the highs from getting too high and the lows too low. Let's see if either coach can keep his players on a more even keel in the week ahead. And, please, no more pre-game empathy for your opponent.

There were several story lines around roster decisions coming from the Florida club this week.

The Capitals players, fans and media win the title of "Most Emo" club of the week. Does the solid showing in the Verizon Center in last night's 5-0 defeat of the Florida Panthers mean we can all relax now?

I think not, and here is a great read that explores how deeply seated the problems are in the way this team is built and the choices made in their quest to win the Cup over the last three seasons: When Everything Changed... And If It Needed To - Japers' Rink Pinpointing the day the Ovechkin Era Capitals took a turn for the worse

Suggesting that the issues are more rooted in a collision of a rookie coach and a shortened preseason, Nick Cotsonika at Yahoo! Sports wrote this: The biggest coaching challenge in the NHL: Adam Oates tries to turn around the Washington Capitals Washington Capitals' Adam Oates is a rookie head coach who has had to do too much in too little time.

I thought this tweet from the Washington Times Steve Whyno, quoting Oates Friday morning, went along way to illustrate the issues they are confronting:

#Caps coach Adam Oates on his biggest growing pain: "figuring out a way to get the guys motivated for today's practice."

Turning our attention back on the ice, the assist of the night goes to beleaguered goaltender Braden Holtby who smartly recognized a bad line change by the Panthers in the second period when setting up Troy Brouwer with his 120-foot saucer pass for a power play goal. Makes it look so easy, but not exactly the odds-on best way to build a winning team night-in night-out.

All of us who follow the Southeast Division know that Ovechkin's Capitals have been the team that benefits from (endures through?) the most national media attention with analysis and speculation on the club's every move for the last several seasons. This story has legs. Stay tuned.

The Jets went two-up/one-down this week, defeating the Panthers in overtime and then taking out the Ottawa Senators in perhaps the drowsiest game of the season yesterday by a score of 1-0 with Al Montoya getting the shutout. In between, they lost a close one to the Toronto Maple Leafs, 3-2, the game decided late in the third period when Phil Kessel (finally!) notched his first goal of the season.

At 5-5-1 the Jets sit at 3rd in the division, just behind the Hurricanes who also have 11 points but a game-in-hand. The former Atlanta Thrashers will be tested this week by three strong opponents as the Penguins, Flyers and Bruins, are coming to the MTS Centre.

By the way, if you enjoy charts and graphs and you're not familiar with the site SportsClubStats, keep it bookmarked as the standings and the race for the playoffs gain traction. Here's the link showing just Southeast Division teams, which includes a version of this graph showing the likelihood of each team to qualify for the 2013 playoffs plotted each day since the season began three weeks ago. 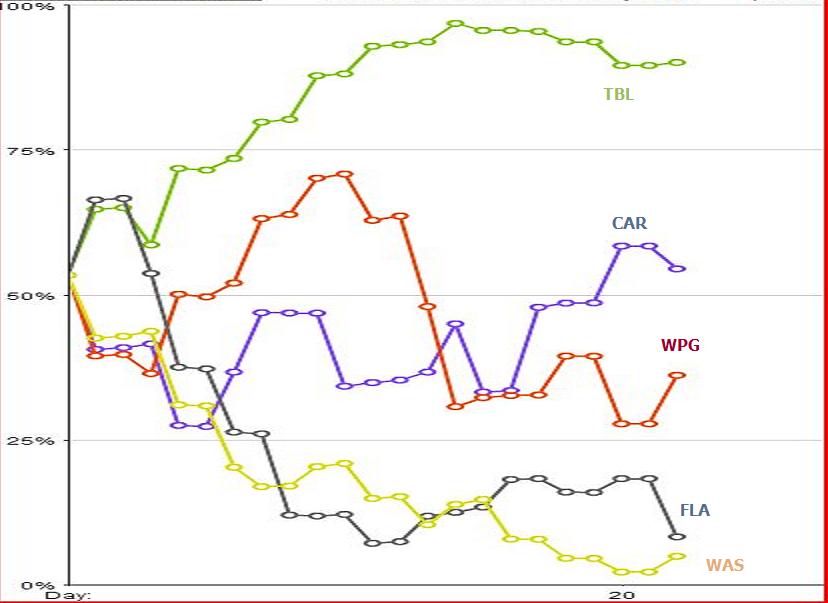