Southeast Division Weekend Update: Caps win 3 in a row, but the Canes claim the top spot

The Hurricanes returned victorious from a grueling road trip perched at the top of the Southeast, and the Capitals got three straight wins. The Jets, Cats and Bolts all struggled to earn points. Meanwhile, key defensemen are dropping like flies.

Share All sharing options for: Southeast Division Weekend Update: Caps win 3 in a row, but the Canes claim the top spot

The Hurricanes brought home 9 of 12 points from the 6-game/11-day tour of the Northeast this past week, then added 2 more points in a win over the surging Maple Leafs in Raleigh Thursday night. Combined with a lingering losing streak from the Lightning, the Canes now find themselves at the top of the Southeast Division standings, leading Tampa Bay by a slim margin of 2 points with a game in hand.

Head Coach Kirk Muller is showing he's the right guy for the job as his team is attacking the opposition night in and night out with an intensity the Caniacs haven't seen since the Hurricanes went to the Eastern Conference Finals in 2009. Sustaining that mindset in the weeks ahead will no doubt be the next challenge for this group.

The Canes star of the week was 2006 first rounder Jiri Tlusty, after he and his linemates, Eric Staal and Alexander Semin combined for 4 goals and 9 points in just the 3rd period vs the Islanders Monday. Tlusty added two more goals in the win over the New Jersey Devils the following night.

Goaltender Cam Ward is looking like his old self, while his crease-partner, Dan Ellis has continued to shine when called upon. Getting the surprise start vs the the Leafs, Ellis is now 3-1 with a 1.74 GAA and .943 Save %, both stats putting him in the top five of the League in those categories.

The Carolina club is on the road again today, preparing to face the Montreal Canadiens tomorrow evening. They'll close out the week at home with a chance to pad their lead in the Southeast when the Jets and Lightning are their opponents at PNC Arena.

There is some cause to temper the optimism as two of the team's top veteran defensemen, Joni Pitkanen and Tim Gleason are day-to-day with lower body "concerns". They'll remain home when the team heads to Montreal this afternoon, with a remaining defensive corps short on NHL experience. Which is to say, sophomore Justin Faulk, at age 20, will be seeing a lot of ice.

UPDATE: Jeff Skinner is also not going to Montreal. He is listed as day-to-day with an upper body injury. He was slammed hard into the boards on two occasions in the game vs Toronto Thursday, but there's no report if that's the source of his current issues.

Looking farther down the line, and re-visiting last week's lovefest for Alex Semin (have you seen the #SeminWave?) , here's a look on where this relationship is headed:

Potential Road Blocks to the Canes Extending Alexander Semin | C-Leaguer, Canes Country While it's still early, Alexander Semin and the Carolina Hurricanes appear to be a good fit. An extension seems logical, but are there salary cap issues that would prevent such a move?

A light schedule this week for the Jets, with just two games at home. They lost both. First to the Flyers and then to the Penguins, with uninspired efforts in front of their famously rabid fanbase. Thursday, they traded veteran forward Alexei Ponikarovsky after just 13 games with the club, sending him (back) to the Devils for picks.

Of greater concern is that their anchor defenseman Dustin Byfuglien returned from a 5-game absence this week, but was unable to spark any turn-around. Former top-three draft pick, 22-year-old defenseman Zach Bogosian, made his season debut after off-season wrist surgery as well - so maybe he will breathe some life into the lineup, though that seems like unlikely. Unfortunately now the Jets leading scorer, another defenseman, Tobias Enstrom injured his shoulder in the loss to the Pens and is expected to be out awhile. SBN Blog Arctic Ice has more here.

Even though the defense has been hampered by injury upon injury, it's finding offense that appears to be a challenge with these former Thrashers, who have yet to put up more than 3 goals in any of their games played so far in February. The media has now focused their criticism on the team's "losing culture," top to bottom. Here's a sample of some local "honeymoon is over" commentary from Wednesday, even going so far as to blame the team's previous relationship:

So how is it possible for players so well-compensated, living out their dreams of playing in the NHL, to be in "half-way"? Because it’s the Atlanta Thrashers way. Always has been. The losing culture was allowed to not only sprout, but thrive like a cancer within this organization for years, with no GM or head coach able to identify the source of it and cut it out. This type of cancer attacks the heart. And the Jets have too many weak ones.

This week could be do-or-die for the Winnipeg faithful as they see their team playing 4 games, starting at home vs the Bruins Sunday night before they head out on the road to Buffalo, Carolina and Philadelphia. The following week isn't any easier as they play the Rangers at Madison Square Garden and then New Jersey, twice in a home-and-home. They have dropped to fourth place in the Southeast, tied with the Capitals at 11 points.

Crisis averted? After opening the season 2-8-1, the Capitals managed a three-game win streak this week, beating the Panthers twice and holding off the Lightning Thursday in Tampa for a 4-3 victory. Has Adam Oates found the magic potion for this group? Can the fans begin to think about pushing for the playoffs and not a draft-lottery pick? With three games versus two tough Atlantic Division teams this week, we could know the answers sooner than later.

Have the Caps turned the corner? | CSN Washington The Caps also have not beaten one of the top eight teams in the conference, a chance they’ll be given next week when they face the Rangers on Sunday, then back-to-backs against the Devils.

Meanwhile, heart-and-soul player Brooks Laich has no timetable to return from a tough groin injury. And now it looks like Mike Green is questionable for the game at Madison Square Garden tonight [Update: Green is out.]. He remains the top dog among Caps blueliners, especially with John Carlson's rough start so far, so keep an eye on this story.

The Capitals finish this week with a strange schedule twist, a fallout of the lockout. They will face the Devils twice, Thursday and Saturday, both games played at home in the Verizon Center.

Finally....the Lightning's six game winless streak is over. And none too soon. Saturday afternoon, they did what they couldn't do vs the Caps on Thursday, as they came from behind, down 5-3 in the third, to take the Panthers out in overtime. Benoit Pouliot buried the puck from close range a minute into the extra frame. Steven Stamkos battled hard throughout, with two goals and a tremendous feed in the dying seconds of the game for the tying goal by Teddy Purcell who was all alone in the high slot. The reigning Rocket Richard trophy winner also drove to the net hard on a shorthanded attempt, drawing a penalty in the third (which set up his power play goal).

Stamkos now has 9 goals and 12 assists, for 21 points in 14 games this season (yep, that's a 120-point season if it carried across a regular 82 game schedule). That's also good to put him in a five-way tie for the scoring lead in the NHL, with Thomas Vanek, Patrick Kane, Sidney Crosby and Martin St. Louis.

The win Saturday kept the Bolts in 2nd place in the division and within two points of the Hurricanes, who have a game in hand. The two will meet for the second of four times this season next Saturday night in Raleigh. In the meantime, the Maple Leafs and Bruins are in town this week; both teams present an opportunity for Guy Boucher's roster to show they can win against tough competition.

For a look at the growth of the region's hockey market under the leadership of owner Jeffery Vinik and GM Steve Yzerman, here's a story from a Caps reporter this week. Lightning making Tampa Bay 'truly a hockey town' | Steve Whyno, Washington Times Helped by Stamkos‘ emergence as one of the NHL’s best, the Lightning are competitive again and in the midst of a hockey renaissance in Tampa. The franchise is two lockouts and almost nine years removed from winning the Stanley Cup, but thanks to a charismatic coach, deep-pocketed owner and strong core of stars, it’s thriving in a nontraditional market.

The Panthers lost all 4 games this week, but by taking 3 of them to overtime they picked enough points to move ahead of the Winnipeg Jets in the standings. The loss to the Lightning on Saturday was another heartbreaker as the team was unable to close it out after building a two goal lead halfway through the third.

Their contribution to the growing list of injured defenseman across the League? Captain Ed Jovanovski, hurt his knee 10 days ago, and will be out yet another couple weeks.

Tomas Fleischmann leads the team in scoring with ten points but linemates Stephen Weiss and Kris Versteeg have largely been non-factors (the trio was briefly broken up) while the subpar play of Jose Theodore and Scott Clemmensen has a lot of fans clamoring for a close encounter of the Swedish kind. Mix these two major problems with a run of early season injuries, inconsistent offense and terrible defensive zone coverage and you've got yourself a recipe for the team that currently resides in 13th place in the Eastern Conference.

The Maple Leafs are in town Tuesday before the Panthers head out on the road to Philadelphia and Pittsburgh at the end of the week. Maybe the Cats can use that same OTL strategy they played so well last year when they won only 38 games in regulation, but combined those with 18 overtime points to earn 94 points and the third seed in the Eastern Conference.

Wrapping up with this week's graph showing the likelihood of each team to qualify for the 2013 playoffs, plotted each day since the season began a month ago (from one of my favorite time-wasting sites, SportsClubStats). It's a pretty startling illustration of the Jets fall-off and the momentum they've lost. The Hurricanes steady climb, with points in the last 6 games, is also plain to see.

At this point, only the top two teams in the Southeast are realistically in playoff contention. The others have their work cut out for them for the remaining 30-odd games left to play. There's time still. 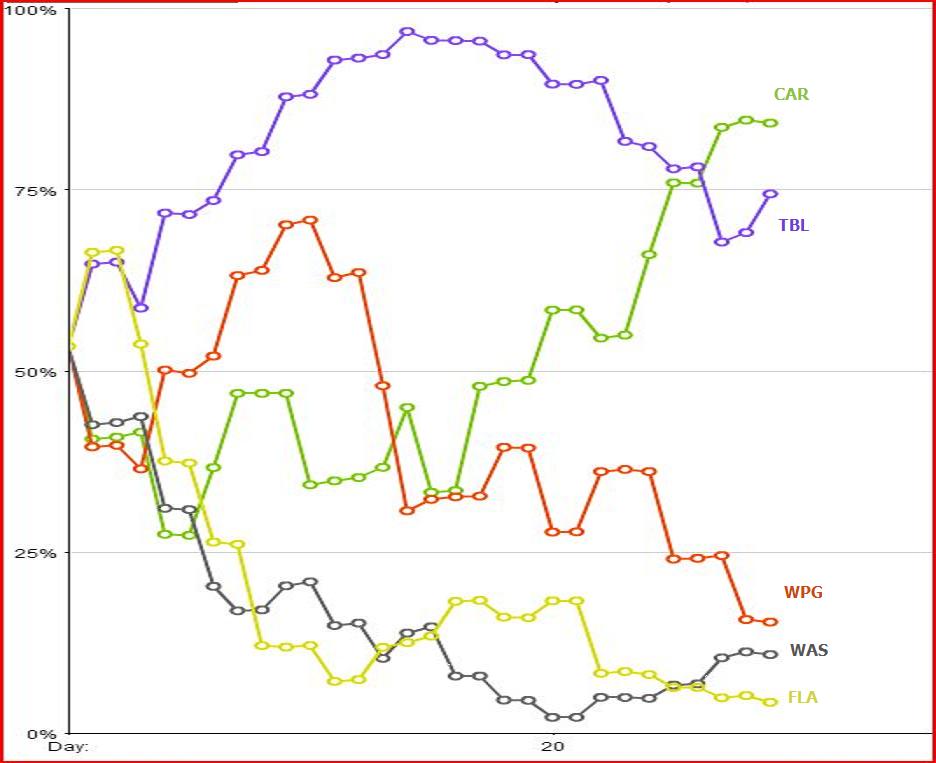