The Lightning recaptured their lead in the Southeast this week as the Hurricanes crumbled with three straight losses. The Capitals and Jets show they are not ready to quit, while Florida is stuck in neutral. Also - does NHL realignment mean the end of the road for the Southeast Division?

The Lightning have found their winning ways again, taking the momentum built in their come-from-behind overtime win over the Florida Panthers last weekend to carry them to victories in two out of three games this week, the most important of which was their dominating performance over the Hurricanes in Raleigh last night, winning 5-2. They head into the middle trimester of the 2013 season at the top of the division, and the resultant third seed in the Conference.

The offense was clicking all week for Guy Boucher's club. Steven Stamkos deserves much of the credit for turning this ship around, with 5 goals in the last four games. Stamkos now leads the NHL in points with 26, and his 12 goals (in 17 games) put him in a 5-way tie in the race for the Rocket Richard trophy - that'd be a 60-goal pace if this were a full 82 game season.

But Stamkos is hardly doing this solo. With 19 helpers, veteran playmaker Martin St. Louis leads the league for assists. Rookie Cory Conacher contributed 4 points (1 G, 3 A) in these last four games, putting him at the top of the scoring totals among first year players, though Florida's Jonathan Huberdeau has a good week and has moved up to second in that column. With St. Louis Blues Russian sensation Vladimir Tarasenko sidelined with a concussion, Conacher's chances for the Calder Trophy nomination continue to solidify.

Looking to the week ahead, the Lightning play the back-half of this weekend roadie in Pittsburgh tonight, an excellent opportunity for them to demonstrate they've put the poor showings of the six-game losing streak from earlier this month behind them for good. They host the hapless Sabres Tuesday before another pair of tough road games to wrap up the week when they travel to New York to face the Rangers and then up to Boston Saturday night, where the Bruins will be ready to re-visit that rivalry.

Last Sunday, it was all sunshine and roses in Raleigh, but a stormcloud of key injuries served notice that rough seas were ahead. And that's exactly what how the week played out as the Canes lost three straight and have dropped to tenth in the Eastern Conference standings.

After losing Joni Pitkanen and Tim Gleason February 14th, another defenseman, Jamie McBain and two forwards, wunderkind Jeff Skinner and steady utility player Tim Brent all went down in rapid succession, Sunday and Monday. Calls were made to the AHL affiliate in Charlotte till there was no one left to bring up (without the waiver risk that cost the Canes Zach Boychuk) so Coach Kirk Muller turned to Canadian Junior hockey and recalled 2011 first-round pick Ryan Murphy on emergency conditions to fill in on the blueline.

Murphy, at 19, must have impressed the coach, even as the Canes lost both games he was in; he averaged nearly 25 minutes ice time in the two appearances, more than the Oilers' Justin Schultz or Boston's Dougie Hamilton by that measure. As soon as one of the three injured NHL defensemen return, Murphy will head back to the Kitchener Rangers (from whence come Skinner and Gabriel Landeskog) where he captains the team. Still, it was eye-opening to see how his unique skillset of elusive skating, puck-handling and booming slapshot translate at the NHL level. With the right partner, he has the potential to be another gamechanger in Hurricanes future.

On a positive note, Alexander Semin's reputation as playmaker reached a new level with this move in setting up Jiri Tlusty's goal in the loss to the Winnipeg Jets Thursday. As the headline read at Capitals' blog Russian Machine Never Breaks: Meanwhile, Alex Semin is Still Doing Stuff Like This. Here's a GIF that catches the key move, in black and white for stylistic effect:

The Canes will be enjoying (enduring?) a "Reunion Week" of sorts featuring their two biggest off-season roster moves. Alex Semin returns to Washington's Verizon Center as a visiting player on Tuesday. Then Thursday night, the Penguins will be at PNC Arena in Raleigh for the first meeting between the two teams since the draft day trade involving Brandon Sutter for Jordan Staal.

Last, Jeff Skinner's return may not be all that far off as he skated with the team yesterday and seems to be on a steady path to recovery from the concussion suffered nine days ago. Here's the report from the Canes official site.

Of the three teams lingering at the bottom of the Division's standings, the Capitals "Last 10" record of 5-5-0 is the best. That doesn't bode well for any of those team's hopes as they try to claw their way back into the playoff contention.

Yesterday's 5-1 stomping of the usually stingy New Jersey Devils in the matinee included Alex Ovechkin's first hat trick in two years, his first at home in three years. Vintage Ovechkin was the way the goals were described across the Capital blogosphere. Two of those were set up beautifully by their new guy, centerman Mike Ribeiro. If the 33-year-old Ribeiro is the catalyst that will bring Ovechkin back to his 2010 form, does that mean GM George McPhee will be inclined to pay him his asking price when his contract is up at the end of the season?

Just for fun, take a look at Ovechkin's third goal yesterday. I'm thinking every single fan in the Southeast recognizes the peril of the Great 8 hovering there at the near hash marks on a power play - right? That the Devils penalty killers could leave Ovi wide open all that time may be more of a reflection of their internal miscues than Ovechkin's return to form.

Injury notes: Defenseman Mike Green is still out and was missing a whole week, though he has been seen skating with the team briefly. Still no timetable for Brooks Laich's return.

In goal, Braden Holtby remains Adam Oate's number one, and has started seven consecutive games now for the Capitals.

The Capitals have the lightest schedule in the Division this week, but you know there will be strong emotions Tuesday seeing Alex Semin in another team's jersey when the Hurricane are in town which will no doubt receive a ton of attention from the local media and bloggers.

The Jets are in the middle of a five-game roadtrip, continuing this week as they face the Devils today and then the Rangers in Madison Square Garden Tuesday. They began this trip with wins in Buffalo and Carolina, then falling to Flyers yesterday. Their captain (and two-time Stanley cup winner) Andrew Ladd has taken over the scoring lead on the team while Evander Kane has points in 5 straight. Kane and the Flyers' Luke Schenn engaged in decent bout yesterday leaving Kane one assist shy of a Gordie Howe.

Have they found that "heart transplant" the Winnipeg press called for last week? They remain far down in the standings and will need to mount a huge string of wins if they have any hope of reaching the post-season.

There was a horrific injury in Raleigh Thursday morning to rookie defenseman Zach Redmond as his leg was cut open by a teammate's skate in practice. This write-up tells the story of how it played out as keeping Redmond alive on the PNC ice required a total team effort. If you're squeamish, you might want to pass.

Miracle on ice - Winnipeg Free Press Lying in the crease at one end of the ice was Jets defenceman Zach Redmond, his own blood already pooling around him. Lee Stubbs, the team's strength and conditioning trainer and assistant athletic therapist, who had been on the ice working with injured goaltender Al Montoya, was already down on the ice applying pressure to a gaping wound on Redmond's inner right thigh.

I'm sure you've seen this by now, but the details of the League's realignment plans were revealed on Hockey Night in Canada last night. These moves were precipitated when the Atlanta Thrashers moved to Winnipeg Manitoba. Here's Puck Daddy's presentation on the topic as the story broke - which of course means 2013 will likely be the end of the line for the Southeast Division. NHL’s four-conference realignment proposal; Wings go East, seven-team conferences go West | Puck Daddy

A case of the more things change the more they stay the same. Let's just scroll down to the graph below and see the Florida lingering at the bottom, although they have more points than the Capitals.

The Panthers made a big move this week to address their lapses in goal, which have given them a League worst goal differential of -20. Their big Swedish goalie prospect, Jacob Markstrom, made his season debut versus the Pittsburgh Penguins at Consol Friday night. The 23-year-old Markstrom, who is 6' -6", gave up 3 goals on 40 shots against. Will he remain with the Panthers, or will Kevin Dineen choose to return him to San Antonio in anticipation of getting him best prepared to take over the top position for the organization next season?

And if you're already focusing on the future in Sunrise, 19-year-old Jonathan Huberdeau is sure to bring a smile. Here's his penalty shot in Philadelphia Thursday night. Pretty slick, eh?

Again turning to my favorite site for graphs and charts, SportsClubStat.com we get this look at the current state of playoff chances for teams in the Southeast. We see a great graphic display of the Lightning and Hurricane's reversals of fortune the last week. The other three in the Division have not gained much ground. Keep in mind that despite the Canes showing in 10th by points, because of match-ups and games-in-hand, they are for now actually in 8th in the East the way these odds are figured. If they can push through and get a few wins this week, they should be able to hang on. 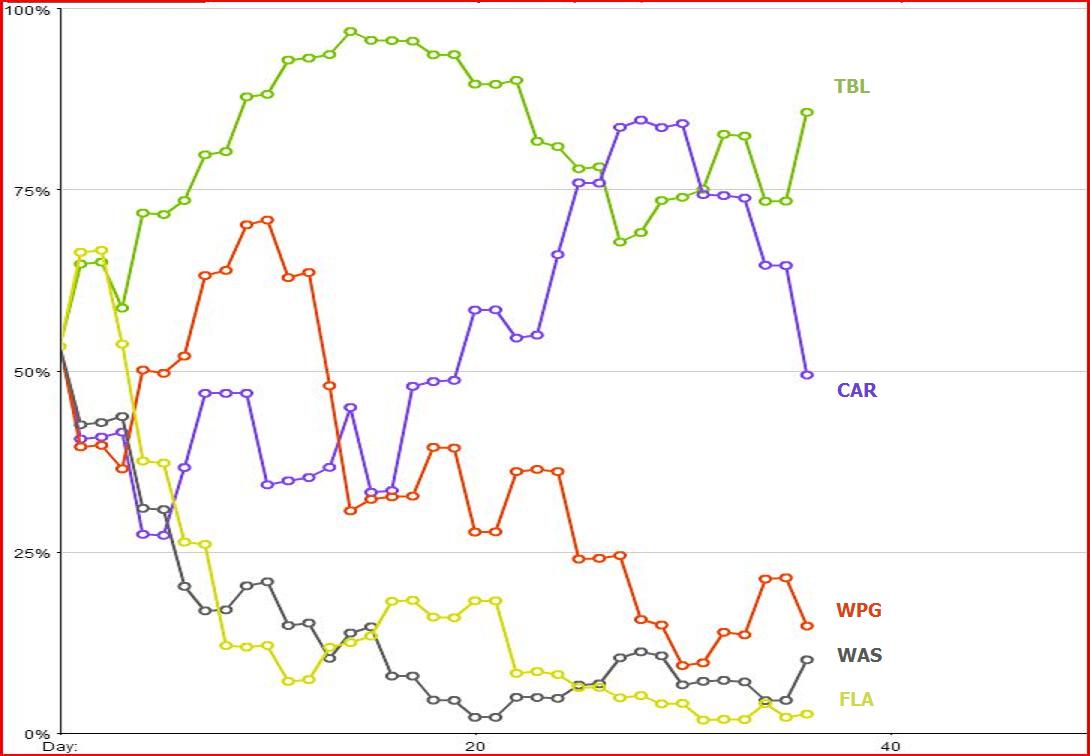