Another feat achieved by Steven Stamkos

Steven Stamkos' 200th career NHL goal may have been on an empty net, but it was remarkable none-the less.

Share All sharing options for: Another feat achieved by Steven Stamkos

To close out Monday night's 4-2 victory over the Philadelphia Flyers, the Tampa Bay Lightning put on a full-court press on the Flyers during Philly's last-ditch effort (you know, pull the goalie, six skaters).

A turnover, two, a shot, and the empty net was filled with further validation that the player wearing #91 for the Tampa Bay Lightning is good at the hockey.

That shot by Steven Stamkos wasn't prototypical of him, it wasn't anything sexy or highlight-reel worthy, but it was news-reel worthy, being that it was the 200th time that the center had lit the lamp in his NHL career.

That was the defending Rocket Richard trophy winner's 21st goal on this abbreviated NHL season, and his 40th point this season as well. I may be going out on a limb here, but I believe the 23 year old Stamkos may just have a future in this league yet.

While NBC Sports Net commentators had grumbled about Guy Boucher's future as a head coach for the Lightning, while they mused about trading Marty St. Louis, as they remarked about Zac Rinaldo's machismo and the larger context of the game at hand (standings, playoff aspirations, etc), the NHL's most prolific scorer since 2009-10 was an afterthought most of the game.

Sure, you got footage of Stammer working around the net and stymied attempts on Flyers goalie Ilya Bryzgalov, but for a network that oversaturated most telecasts with love for certain NHL stars, Stamkos was largely ignored.

Yet, post-game and this morning, something's rubbing me the wrong way about this goal. Well, not the goal but a certain celebration of the goal. It isn't fan reactions to it, or sore-loser rhetoric from Flyers fans. It's image. It's marketing. It's a revision, it's perception, it's marketing. 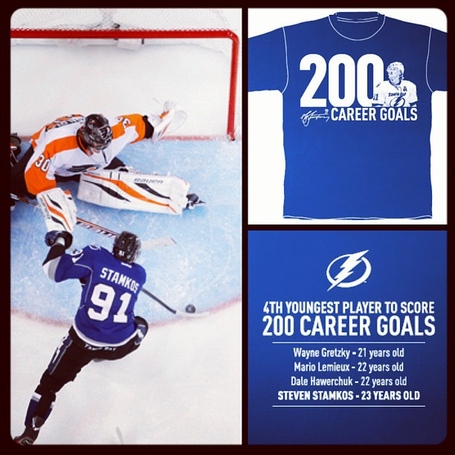 The above was posted on Instagram by the Lightning, giving the false idea that Stamkos scored directly on Flyers goalie Ilya Bryzgalov. That same image was posted on the Tampa Bay Lightning's web site post-game. It's a nice image, really, but it's disingenuous and sullies the Lightning's marketing efforts surrounding the goal.

You want to celebrate Stamkos' feat? Use a picture of the man on ice, celebrating a goal. The Bolts are too public an entity to get away with a false-image association like this.

It's also disappointing to think that, knowing the blogosphere and social media, this false-association will become the story instead of the goal and feat itself. The image of Stamkos shooting on Bryzgalov might foster a false impression of goal #200, but the stats the image is attached to are no lie.