As we approach the midpoint of the season, the standings in the Southeast Division are far from settled. The way it's going, the Divisional winner may be the only team still playing in May, and with the advantages of the third seed. So pay attention to any games between the division rivals as they'll be more important with every passing week.

The Hurricanes were wounded and hurting last weekend, and after an unlikely comeback win over the hapless New York Islanders last Sunday, looked lost when they faced the Washington Capitals at the Verizon Center Tuesday. Though #SashaReturns became the pregame meme, Alexander Semin and his teammates were not able to buy a goal with their patch-work line up, losing 3-0.

All that changed when four injured regulars unexpectedly returned to action Thursday, including Jeff Skinner and two top-4 defensemen, Tim Gleason and Jamie McBain. It was a totally different and much improved group that battled hard in front of a sold-out PNC Arena defeating the Pittsburgh Penguins in convincing fashion Thursday, 4-1. The Canes followed that effort up with a 6-2 rout of the Panthers at home last night. Combined with the four losses the Lightning suffered this week, Carolina returns to the top of the Southeast and have an opportunity to separate a bit more with a three-game homestand in the week ahead.

The top line of Jiri Tlusty (3-2-5), Eric Staal (4-2-6), and Semin (1-7-8) combined for 19 points in the last four outings and, when together, have shown jaw-dropping synergy. All three forwards are at a plus/minus of +14, together tied for 2nd in the NHL. Make no mistake, the success of the Canes top line on the scoresheet is powered by Alex Semin, whose gutsy effort in all three zones and cerebral hockey sense every shift seem to be even more impressive than his talent. Who knew? (Obviously, not Troy Brouwer based on his comments Monday).

If you're looking for some insight on how the 24-year-old left wing Tlusty complements his two more famous linemates' success, Andrew Hirsch posted a story full of quotes from both Tlusty and his coach Kirk Muller, who is showing he has a knack for putting players in positions they can succeed.

Jiri Tlusty Enjoying Breakout Season | The Hockey Writers quoting Muller to say, "Jiri’s the solid guy on that line that reads off (E. Staal and Semin)," Muller said. "When they’re playing, he’s always got their backs … He brings the structure to that line and gives the other two a little more flexibility to be more creative than the other guys."

Goaltender Cam Ward is seemingly getting back to form, though seemingly still a notch short of his best play. Today, backup Dan Ellis will get the start in Sunrise, with Ward likely to get the nod for all three home games the rest of the week. With Gleason and McBain back, the defensive pairings no longer over-slotted, over-worked and exhausted. Ward will be the primary beneficiary of an intact and experienced defense.

Injuries are still a factor for Carolina. While Joni Pitkanen was activated off the IR yesterday, he lasted only one period before going out again with an undisclosed lower body injury. Chad LaRose also is also hurt as the team announced he is being evaluated for concussion symptoms. Depth Center Tim Brent is a ways out as well (groin) and the gritty top-6 winger Tuomo Ruutu is out another 6 to 8 weeks following January hip surgery.

If the Canes can sustain the kind of solid efforts and smart play in all three zones they showed over the Penguins and Panthers this week, the division is theirs to lose. Unfortunately both injuries and inconsistency have plagued the club this season (and previous campaigns), so Carolina fans know from experience that it's far too soon to count those playoff chickens.

Looks who's moved into second place in the Southeast division. Although the Jets had a three-game win streak snapped Saturday by the Capitals, they also benefited from the troubles in Tampa Bay and are climbing the standings with a purpose. The team is back on the road this week, playing three games in the Sunshine state where they had a rough go early the season, losing both games vs their Florida rivals by a combined score of 14 - 6. This time they have both Dustin Byfuglien and former third-overall pick Zach Bogosian working for them on the back end, so I'm thinking the the defense will be tightened up considerably since the last time they were this far south.

Andrew Ladd, the Jets captain and a two-time Stanley Cup winner, leads the team with points (8-12-20). Evander Kane, who it's worth noting is still only 21 years old, is second with 9 goals and 18 points. Kane is also tied (with Alex Ovechkin) for the League lead for shots on goal, with 85 SOG through 21 games. Kane may be at the center of the story to watch in Winnipeg if he continues to be a consistent scorer and the Jets are able to stay hot.

Is this not the Jekyll-and-Hyde team of the Southeast for 2013? From one period to the next, you never know which team will take the ice. They dominate Carolina at home Tuesday and then put up no effort in Philadelphia the next night as Alex Ovechkin is taken to task by Mike Milbury in a vicious second intermission rant on the nationally televised game. Saturday, they come out flat in Winnipeg, outshot 15-5, and then reverse momentum and take the game 3-0 with the Jets unable to find the net on home ice.

The Caps have pulled themselves out of the basement, and at 8-11-1 are only three games below .500 hockey. It's anyone's guess if they will continue to surge as they adapt to Adam Oates' coaching, but safe to say it will be up-and-down for awhile.

Braden Holtby has been solid in net as he pitched two shut-outs this week in those essential Divisional wins over the Canes and Jets. After two games back in the line up, Mike Green missed the game yesterday in Winnipeg.

Ovechkin continues to be the key to where this team goes, as pointed out in this story posted Friday at Russian Machine Never Breaks. Too harsh or the bare naked truth?

This team is not a good team. It looks good because you have guys like Ovechkin and Backstom and to some extent Green. But when you look beyond that, this team does not have any depth. The talent level is overestimated. The goalies are young and inexperienced and are prone to lapses. I think this team since the 2009-2010 season has really been in a downturn, and I just don’t see them coming out of it any time soon unless there’s some major personnel changes that happen at the core.

Tuesday night will be a good measure of this Capitals team as they face the Boston Bruins, clearly the best in the East right now. They then host the Panthers, before heading to Long Island. Both those games they need to win if they have any hope of revived playoff hopes. Despite recent, if spotty, displays of excellence, the reality check comes when you see they are still no better than 14th in the Eastern Conference.

Not a good week to be a Lightning fan as the team failed to add a point in the standings. They've dropped four straight now, and their 3-7-0 road record (their only road wins are vs the Canes twice and the Panthers) suggests that they have two more challenging matches in their immediate future in Pittsburgh and New Jersey. Relief could be a ways off.

The Bolts return home from their current 4-game road trip to host Winnipeg and then the Montreal Canadiens later in the week, but as we near the midpoint of the season, if they don't get a road win before Thursday, the chances of climbing out of this hole they're in seem so much tougher.

The remarkable Steven Stamkos continues to dominate the stats line and was named the NHL's #1 star of the month of February, but it hasn't been enough to carry the whole team to the top as the Bolts dropped from first to third in the Division, and from third to eleventh in the Eastern Conference.

The youngsters are a mixed bag. Cory Conacher still leads the league for scoring among first-year players, but Anders Lindback has not has a start since the loss to the Penguins a week ago. Forward Richard Panik was returned to Syracuse this week, and Alex Killorn picked up his third goal of the season in the loss to the Bruins yesterday.

Injury wise, the loss of Sami Salo in Tuesday's loss to the Sabres is not going to help the clubs defensive woes. He is listed as "Lower Body, day-to-day".

UPDATE: Per Erik Erlendsson, Sami Salo will be back in the lineup vs Pittsburgh Monday. Benoit Pouliot and Ryan Malone will not travel with the team.

Looking ahead to the 2013-14 season, re-alignment was a big topic for both Florida teams this week. Raw Charge lays it all out for you here: NHL and NHLPA near an agreement on a new league alignment for 2013-14 - Raw Charge

After winning the Southeast last season with only 34 wins, it continues to look like 2013 will not be the Panthers' year. You have to point to their unending list of injuries to key personnel as the leading cause; they have not been able to string together wins to give any semblance of a competitive club. Head coach Kevin Dineen and assistant Craig Ramsay are a pair of tough character hockey greats, but this season must be a test for men not accustomed to such uninspired and sloppy performances by the team in front of them night after night.

How demoralizing are all the injuries? Seeing numerous errors on the Panther's Official "Injury Report", I noticed it hasn't been updated in nearly two weeks. Even the team's own staff can't bring themselves to think about it.

The latest to go down is 36-year-old Jose Theodore, who left the game in Carolina early last night with a flukey knee injury, and will likely be out for awhile. Jacob Markstrom was immediately recalled from San Antonio and should remain with the big club for the foreseeable future. He is regarded as the franchise goalie of the future and it looks like he will get a chance to show if he's ready sooner than later.

In addition to Markstrom, rookie Jonathan Huberdeau represents another bright spot on the horizon. Huberdeau was named the top rookie for February with 9 points in 13 games.

If there is any possibility of the Panthers climbing their way back into the mix, it would likely require then winning all four games this week, all of which are against Southeast Division opponents, including facing the Jets twice at home.

For the first time in weeks, this graph is no longer just about the Lightning vs the Hurricanes. The Winnipeg Jets have made a convincing push, again helped by the Lightning's recent struggles. The loss to the Caps yesterday was a significant setback for the Winnipeg.

Early season wins by the Bolts means they still have a decided advantage over the Jets if they can right the ship soon. Be sure to head over to SportsClubStats.com to see all the permutations and updates through the week. 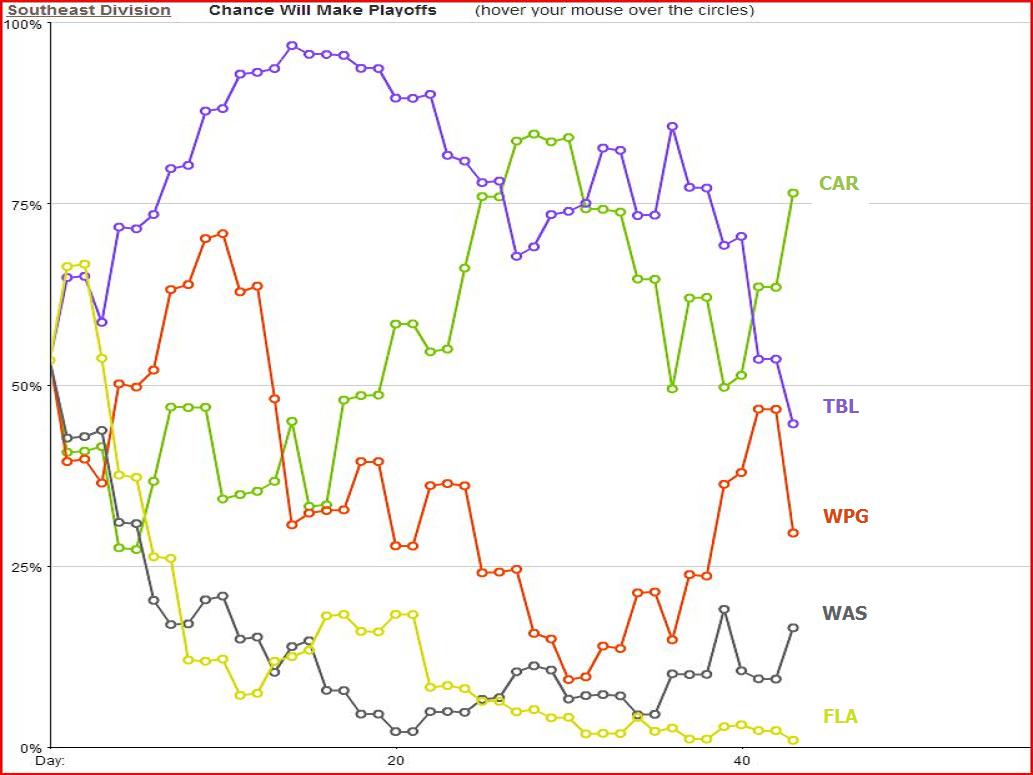